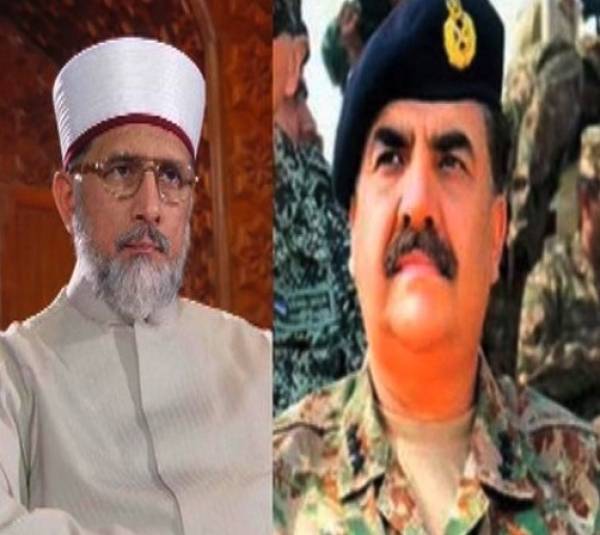 ISLAMABAD: Pakistan Awami Tehreek (PAT) Chief Dr. Tahir-ul-Qadri warned Dama Dam Mast Qalandar to follow if a fresh FIR is not lodged during the next 24-hour time against the killers.

Addressing the charged participants of Inqilab March at D-Chowk opposite Parliament House after his meeting with Chief of Army Staff General Raheel Sharif around 4am, he said he does not want Nawaz Sharif as Prime Minister and Shahbaz Sharif as Punjab Chief Minister during the next 24 hours.

No more dialogues can be held if demands—registration of fresh FIR and resignation of Nawaz Sharif and Shahbaz Sharif, are not met, he warned in categorical terms.

It should be mentioned here that Dr. Qadri had earlier announced Thursday as Youm-e-Inqilab (Day of Revolution). He was giving directives to the participants of Inqilab March late Thursday, when he was approached by Army Chief with an offer to become facilitator and guarantor.

Before departing to meet Army Chief, Dr. Qadri sought permission from the protesters if they allowed him to call on Army Chief or not.

Having returned from Pakistan Army’s headquarters, he made straight to dais, and started his speech by rubbishing the media reports that he went to his allies for consultations after the meeting with the army chief was over.

He told the people that his meeting with Army Chief lasted for three hours and twenty minutes, adding the meeting took so long as each and single point on the agenda of revolution, was discussed with him at length.

Lauding the army chief to be a wonderful and ‘patient audience’, Dr. Qadri remarked the meeting progressed in a cordial atmosphere, which gave him added confidence over army as an institution. However, the consequences are yet to come to the fore during the daytime, he added.

The PAT chief underlined Sharifs once again came up with deceit plan as they attached two separate documents in English to the FIR, which were not part of the original one submitted by the PAT. He lashed out at Sharifs, saying the tricky rulers released to the media only Urdu part of the FIR to hoodwink the masses into believing that the PAT’s demand has been fulfilled.

The PAT chief noted they (Sharifs) crafted the other parts in English in such a way that they may get themselves freed with the help of the ‘manipulated loopholes’ in the attached additional documents. Dr. Qadri also reiterated that Section 7 of the Anti-Terrorism Act, was not included in the FIR.

“I showed the FIR to the army chief, who was taken aback at the cunning of Sharifs. He comprehended that we were deceived,” he added underscoring now, the army chief will ensure registration of fresh FIR as per PAT’s application, after getting the false one cancelled during the next 24 hours of extended deadline.

The PAT chief asserted, “I told him all the mechanism from the welfare of people to the conduct of general elections, will be discussed only after the FIR is lodged and the resignation of Sharif brothers; otherwise, no more talks—just Dama Dam Mast Qalandar.”

“We do not want any of Sharif family or the ones accused in our FIR, in the government offices,” he demanded adding if the demands were not met, the Public Parliament will enforce its decisions tomorrow.

The PAT chief said his negotiations team would meet the government’s committee, provided that their three initial demands—resignation of Nawaz Sharif, Shahbaz Sharif and registration of an FIR on Model Town incident per their application are met on Friday. –SAMAA