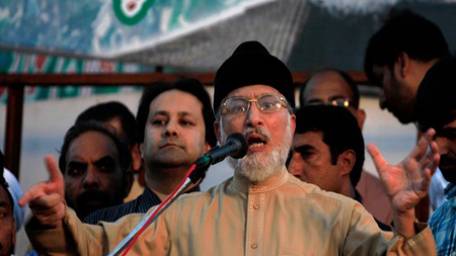 “You will find tax evaders, loan defaulters, fake degrees holder and multiple criminals sitting in parliament,” Qadri told his sit-in crowd, adding, “Business of corruption and looting was being done in the parliament from dawn to dusk.”

He said democracy in Pakistan was to protect corruption of each other (politicians), adding, “State will not survive if incumbent regime remains in power as a conspiracy is being hatched against the existence of the country.”

He alleged that a group of opportunists had been taking turns for the last 30 years. However, the people have stood up now to take their constitutional rights, the PAT chief said.

The scholar said parliament should see that the protesters represented the 180 million people of Pakistan. He said these people plough fields and give their blood and sweat for the country in time of need. He said he had educated them to get their rights. “They know their rights now. They know that Parliament is an alliance of corruption. Their alliance is of power, corruption and business,” he added.

Dr Qadri said, “Listen to me carefully! Imran Khan and I do not fear arrest. If you come here to arrest us, your rule will end within 24 hours.”

“I wish Nisar also got the images of people verified from NADRA who were involved in Model Town incident.

He slammed the PML-N-led government and said their government would soon be overthrown by the ‘sea of people’ gathered in Islamabad.

He said, “The constitution is not enforced and we have come to ‘revive’ it.”