Qadri says his departure from sit-in to bring ‘bloody’ revolution 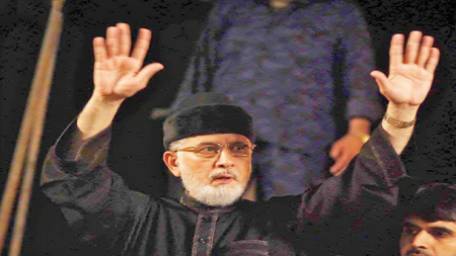 ISLAMABAD: Pakistan Awami Tehreek (PAT) chief Dr Tahir ul Qadri on Monday claimed that his departure from the sit in will bring “bloody” revolution, which will sweep away all the corrupt rulers and leaders from the country.

Addressing his diehard workers on Constitution Avenue, the PAT chief warned the government to avoid testing his temper, which was about to blast. He said the time is not far away when each and every segment of society will join together for rebel against the system. Serious results will come out once the ‘Inqilab March’ ends in Islamabad, he said and vowed to spread the message of revolution to whole country and whole world will see how he would make them all a part of this storm.

“At present, traders, labourers, peasants are joining each other against the existing system, while VIPs are now being thrown out of planes,” Qadri said, adding that the credit for change in perception of people goes to the participants of the sit-in because it had educated the common public about the constitution. Previously people were unaware of their basic rights, he claimed, but now everyone knows what his due share was.

Qadri said we have to make the people a part of revolution that had not left their homes yet. To him, the sit-ins in Islamabad had given common men a sense of Articles 62 and 63 of the constitution. “I was fighting battle to make Pakistan a progressive and developed country,” a fiery anti-government cleric said and vowed to visit every city and street of the country to further his message of revolution. He asked his supporters to stay at the sit-in camp, until he asks them to leave. He added that everyone in the country was willing to be a part of revolution.

Urging the rulers to submit resignation, the PAT chief said timely resignation could fix the issue. He said that he was holding a grip on the “bloody” revolution at the moment. “Further delay in the resignation from Prime Minister Nawaz Sharif can release the hold on bloody revolution,” Qadri said.

While counting on the ‘benefits the sit-in has granted to the people’, he said that the government has, at first, overcharged customers on electricity bills but ‘our strong condemnation’ made the government to reverse decision of overbilling to power consumers. He said cases have been registered against prime minister, chief minister and noted federal and provincial ministers due to the ‘pressure built by sit-in on the government’.

“Has it ever happened in the history that a case is registered against sitting prime minister and ministers?” he asked. He said a time could come when sit-ins would be staged in all parts of the country. He warned rulers to step down before such a juncture arrives. Qadri assured the protesters that ‘Revolution March’ would bring ‘greater results which would shape the lives of common people in a positive way.

Dr Qadri also believed that the people of Pakistan were responsible of the present socio-economic state of the country. He supposed that had the people listened to his stance last year; they would have not been facing the situation they were facing today.