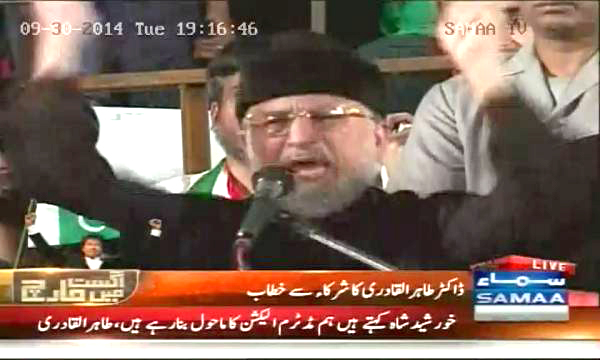 Addressing his supporters at D-Chowk for the record 47th Day on Tuesday, Qadri said that sit-in would be staged in every town, tehsil and district of Pakistan when time came.

“The world will soon see how a revolution is brought about,” he pledged.

The PAT chief said that PPP was beginning public rallies to stop their workers from joining other parties.

He said that his 2013 long march taught the constitution to every child. Qadri said that he would persuade citizens to take to streets for their rights.

“Khursheed Shah has advised Prime Minister Nawaz Sharif to step down by himself,” Qadri said, questioning why Shah had not made this demand on the floor of Parliament.

“I want to make Pakistan a great South Asian country. We are fighting a war for Pakistan’s future,” he added.

He warned Bhakkar and Gojra administration against harassing PAT’s workers.

“I can declare a war against them if they don’t stop their illegal and brutal actions,” he said. - SAMAA