The long anticipated time of Mawlid un Nabi (blessings and peace be upon him) has finally come. To mark and celebrate the coming of the beautiful month of Rabi ul Awwal, a Peace Walk was organised to demonstrate the peaceful message of Islam. This was held on the 14th February 2010, by Minhaj-ul-Quran International Denmark, with participation and cooperation from several other mosques and Islamic organisations including Muslim Cultural Institute (vesterbro), Islamisk Kultucenter (Amager), Dansk Pakistansk Kulturforening (Ishøj) and Islam Forum Tåstrup. 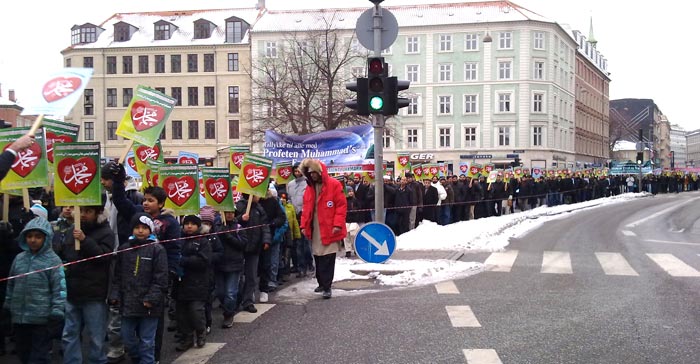 Workers of MQI Denmark facilitating in the success of the Peace Walk eagerly gathered at the MQI centre in Valby, collecting all vibrantly presented banners and placards.

The participants began to arrive at 1.30 in the afternoon at the beautiful location of Søndermarken (Southfield) pleasantly lit up with white snow, where MQI workers, delegates and volunteers readily awaited their arrival. Each of which were handed banners, flags and placards with the Prophets name 'Muhammad' (blessings and peace be upon him) written in Arabic, enveloped in a red heart. There was a range of participants from all backgrounds and age groups, which included scholars, ulemas, and executive members from various other mosques and organisations of Copenhagen. People passing by curiously watched and asked the purpose of the gathering. 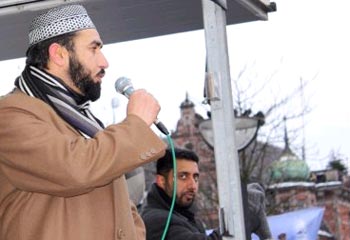 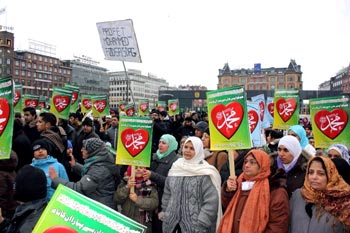 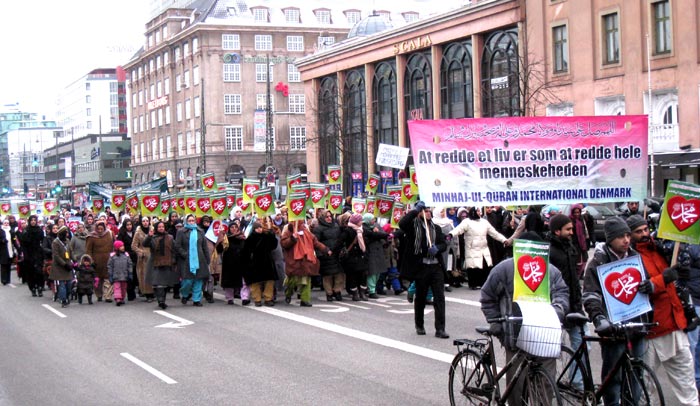 Moments before the Peace walk was to begin the soothing and spell binding melody of Durood echoed in the distance permeating the streets of Copenhagen. Onlookers with its ancheting frequencies, then could see a truck at the entrance of Søndermarken framed with the name Muhammad (blessings and peace be upon him) on either side that was playing this beautiful Na'at melody. 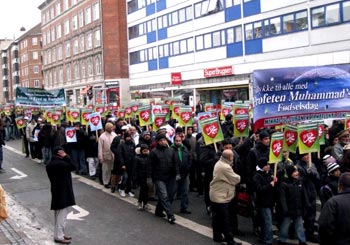 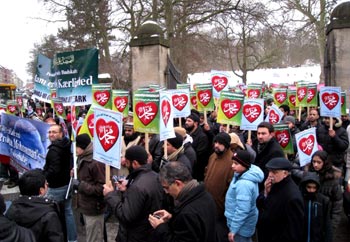 Everyone made their way onto the main high street reciting along with nasheeds chanted aloud from the truck, encapsulating warmth amongst the crowd, even in the strongest and coldest winds. Young children enthusiastically lead the march followed by the Imams, VIP personalities and finally a large gathering of women. Once all participants had aligned, 2 metre long banners were held up high that read “Islam is Peace and Love” and “Happy Birthday to your Beloved Prophet Muhammad (blessings and peace be upon him)“. 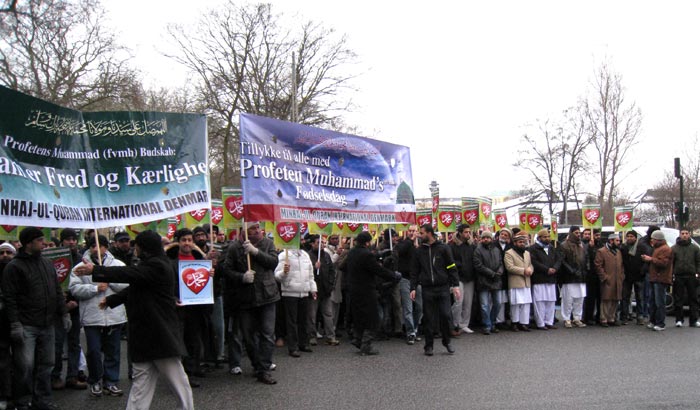 The police followed closely behind keeping the roads clear and safe .A numerous numbers of vehicles, all presented in vibrant colours of decorations with their beaming lights, to mark the occasion. The streets filled with people working, shopping and walking by who stopped to watch as the participants walked passed reciting Arabic. Not to seclude anyone from the celebration the volunteers handed out a variety of sweets to the onlookers on the pathways and in their cars. 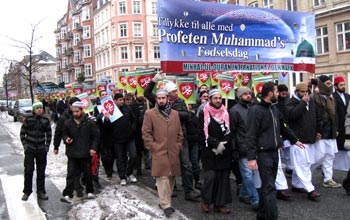 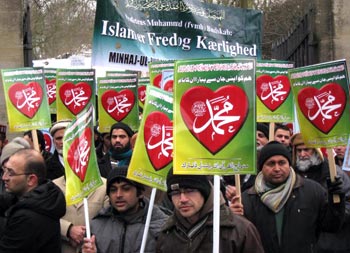 The walk continued into central Copenhagen while photographers and video graphers continued to snap away capturing the entire calmness, warmth and rejoicing. Even as the elderly and young got restless with the cold, they kept their smiles afloat and spirits high, by encouraging one another to complete their mission hand in hand, demonstrating their love for Allah's Beloved Messenger Muhammad (blessings and peace be upon him).

As the road narrowed, the full capacity of participants could be seen. It was evident the expected estimate of hundreds was by far out reached with an estimate of 1500 participants. After approximately 2 hour of walking through central Copenhagen the crowd followed onto Copenhagen Central Square where a final program had been arranged. Here, after recitation of the Holy Quran by Qari Tahir Sahib a naat was presented by Qari Zaheer Ahmad and Minhaj naat council. Continuing the program, the imam of Muslim Cultural Institute (vesterbro) and Islamisk Kultucenter (Amager) Allama Muhammad Zaheer Butt Sahib and Allama Qari Noor Ali Sialvi Sahib held speeches upon the love and mes age of peace which our beloved Prophet Muhammad (blessings and peace be upon him) came to us with. To conclude the program a speech in Danish was presented by the spokesperson of Minhaj-ul-Quran Denmark Qaisar Najeeb. He talked about the teachings of our Holy Prophet (blessings and peace be upon him) on the topics of right of the animals and the climate. Two issues which are very eagerly related to as the beauty of the western societies. Lastly, heartfelt gratitude was presented to all participants of the peaceful walk and Imam Owais Qadri conducted the ending Dua. 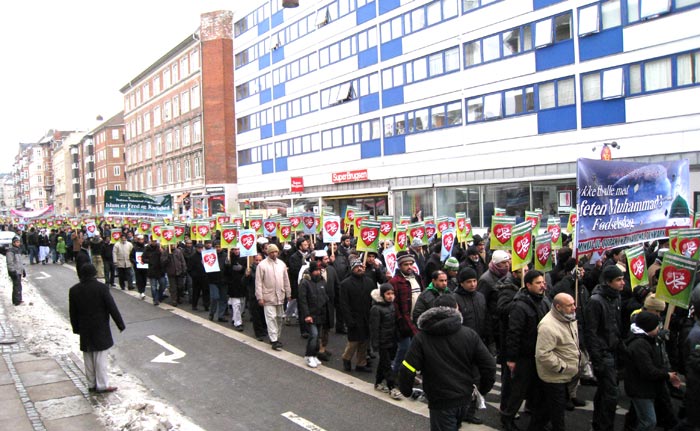 While the Nasheeds filled the square, workers of MQI and volunteers were appointed to set up areas on either side of the crowd to present free refreshments and food before retreating to their homes. Everybody was in a state of ecstatic experience feeling overwhelmed on the occasion. 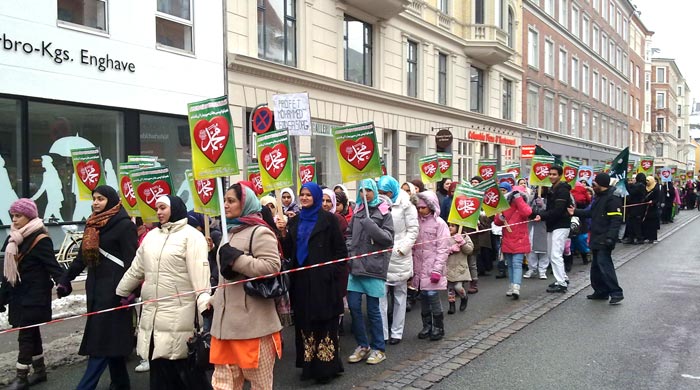 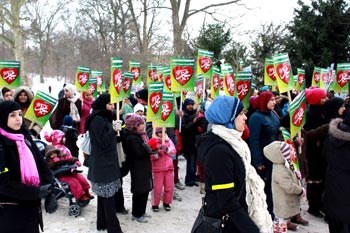 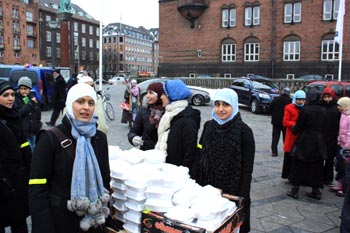