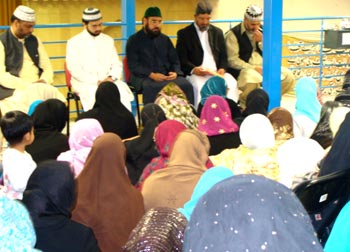 General Secretary of Women League (France) Mumtaz Malik presented the performance report of the organization and apprised Sahibzada Hassan Mohi-ud-Din Qadri about the monthly schedule of different programmes held under the banner of the Women League. President of the Supreme Council appreciated the performance and instructed the Women League and the Sisters League to further work in unison with MQI France. The meeting ended on Dua for long life and health of Shaykh-ul-Islam Dr Muhammad Tahir-ul-Qadri.