Calm voice in sea of extremism 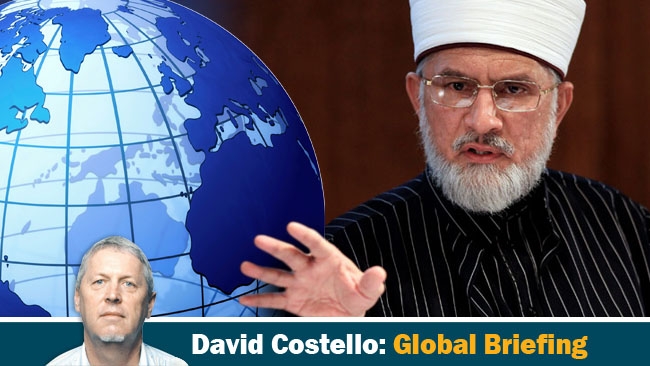 IT takes a supremely brave individual to look into the eyes of Muslim extremists and tell them they are un-Islamic and unbelievers.

That is exactly what Dr Muhammad Tahir ul-Qadri has done and that is why he acclaimed across the world as an enlightened, moderate voice within Islam.

Dr Qadri was born in Pakistan and became a distinguished scholar, lawyer and politician in his home country.

These days he is based in Canada and he travels the world to speak and touch base with members of Minhaj-ul-Quran International, the organisation he founded.

It is described as a worldwide, broad-based moderate Islamic welfare, human rights and education organisation.

Last week he was in Brisbane to address an interfaith meeting at Eight Mile Plains.

Now to say this man and his message are inspirational is something of an understatement.

I think most of the 500 or so people who heard him speak last Friday realised they were in the presence of an exceptional man.

He is a slight, immaculately-groomed individual and at first he spoke softly so the audience was straining to hear his words as he explained that true Islam does not accept brutality, extremism, militancy, killing and massacre.

There were murmurs of approval as he described Australia as "the best society, the best community on this planet, practising multifaith, multiculturalism and diversity in its true sense and reality".

His voice rose to a crescendo while urging the audience to reject "bin Ladenism" and to remember that a Muslim was, first and foremost, a person of mercy.

He was given a prolonged standing ovation and looking around the room it was obvious a lot of healing was going on.

Dr Qadri is one man who can reach across that most difficult of divides - the one that exists between the Muslims and modern Western society.

Their attendance was a show of solidarity with a Muslim community which has done it tough over the past decade.

There is no doubt the vast majority of Muslims in this country were appalled by the attacks of September 11, 2001 and the Bali bombings of October 2002 which killed 89 Australians.

But that did not spare them from being jeered at and spat on in the street and viewed with hostility as an anti-Islamic backlash swept the Western world.

Reports that that radical Muslims in Sydney and Melbourne had planned terrorist attacks in this country added to the tension.

Last year, radical Melbourne Muslim cleric Abdul Nacer Benbrika and five of his followers were jailed on terrorism charges. At their trial, a jury was told they discussed terrorist acts on city landmarks in Melbourne.

There were also revelations that mosques in Sydney and Melbourne were selling notorious and fraudulent anti-Semitic tracts such as The Protocols of the Elders of Zion.

It didn't help when Sheik Taj Din al-Hilaly the imam of the Lakemba mosque in Sydney and an Australian Sunni Muslim leader made a series of controversial statements. In 2006 he compared women wearing skimpy clothing to "uncovered meat". Before that he had called the Holocaust a "Zionist lie".

Brisbane was somewhat removed from these controversies but it was not spared entirely.

The worst attack against Muslims came only days after 9/11 when a wooden mosque in Kuraby in Brisbane's south was firebombed and burnt to the ground.

More recently, there were some protests about the expansion of the Australian International Islamic College which has campuses at Durack, Carrara and Buranda.

Some callers to talkback radio worried about the schools turning out suicide bombers.

Dr Qadri has built a lot of bridges with the non-Islamic world but his main message is aimed directly at Muslims for a very good reason.

He is on the side of the angels in a battle for the soul of Islam.

For this, he has widespread support in the West and his profile increased in March 2010, when he published a 600-page "fatwa" or edict, which declared that terrorism and suicide attacks were "un-Islamic".

After this, he appeared on Sky News, BBC News and Al-Jazeera and was interviewed by Sir David Frost.

There is much admiration for the work of Minhaj-ul-Quran International which in 2010 ran an anti-terrorism camp for Muslim youth in the UK.

Moderates such as Dr Qadri do not fear the West, which, as he says, allows Muslims more human rights and freedoms than Arab nations.

His chief enemies are Islamic hardliners inspired and funded by the austere Wahhabist or Salafist traditions of Saudi Arabia.

The militants and terrorists have particular disdain for the Sufi Muslim tradition to which Dr Qadri belongs. Sufism is a "mystical" stand of Islam which venerates saints and includes rituals of singing and dancing. Taliban extremists in Pakistan consider Sufis to be decadent and heretical and have killed hundreds of people in bomb attacks at shrines in the past two years.

This, of course, is the heart of the problem.

All Muslims look to the Koran and the Sunnah - the teaching and practice of Prophet Muhammad.

Different people interpret these ancient texts in different ways. While Dr Qadri cites the Prophet's tolerance of other religions, you won't find find any churches or mosques in Saudi Arabia.

Such a divergence of views, or course in not confined to Islam - take a look at the ruckus in the Christian church over homosexuality.

And in centuries past, Christians used the Bible to justify all sorts of barbarism, from anti-Jewish pogroms to slavery.

The Christian world has evolved into a largely liberal-democrat entity. The Islamic world has a long way to go.

It is important that we give plenty of support to decent ordinary Muslims and leaders such as Dr Qadri.