The Conference is being arranged to display in following cities of Pakistan: 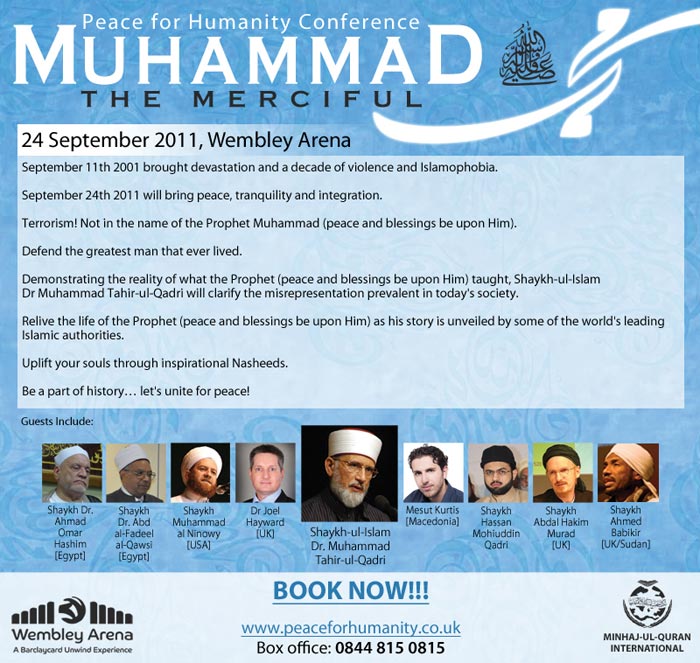 This conference, organised by Minhaj-ul-Quran International and the Al-Hidayah team, will present the merciful and peaceful personality of the Prophet Muhammad (peace be upon him) to the wider western Muslim youth, as well as non-Muslims, and how his life and teachings are relevant to our situation today.

God Almighty Himself has conferred upon his beloved Messenger (peace be upon him) the title of ‘Mercy for Humanity’. And, as one bestowed with this title, the Messenger’s life was a paragon of peace, love and mercy to all those around him. He was the originator of a system of just rule that had no previous precedent, and the architect of the enlightenment and civilisation as we know it.

In spite of the above, most of humanity is either not aware of his life and works, or is steeped in misinformation and distortions about him.

This conference will bring together a selection of speakers to discuss the various aspects of the life and personality of the beloved Prophet Muhammad (peace be upon him), for us to remember God’s greatest favour to us, and to enlighten the public on various aspects of his life, personality and traits, in order for them to appreciate him and at the same time clarify misconceptions and misunderstandings.

This conference is a continuation of a series of conferences and residential training events that we have been hosting for the past decade (including Al-Hidayah events) in our attempt to teach and promote the moral and tolerant dimensions of Islam, especially among the youth in the West.