Coming: Pak Islamic scholar who pulls no punches against terror

Pakistani Islamic scholar Tahirul Qadri, who has been facing threats for his condemnation of terrorism by various outfits in Pakistan, including Taliban, is scheduled to visit more than half-a-dozen places across the country from February 25 to March 18 amidst protest by some groups in Gujarat.

Coming to India on an invitation by Karjan-based Minhajul Quran International (India), a branch of the UK-based MQI headed by Qadri himself, the Pakistani academician, who subscribes to Sufi school of Islamic thought, will be specially focussing on anti-terrorism in his lectures. 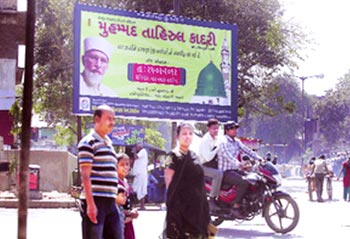 After launching his programme on February 25 from Karjan, a small town 40 km from Vadodara that has a population of less than one lakh, he will attend functions in Vadodara, Ahmedabad and Bhuj. He will also deliver lectures in Hyderabad, Ajmer, Mumbai, Raipur, and Bengaluru.

In Vadodara, he will address MQI workers at Sayaji Hall on February 27 and religious groups on February 28 and 29 at Tandalja, a Muslim pocket on the outskirts of Vadodara.

Asked about the Qadri’s visit coinciding with February 27, the day Sabarmati Express in Godhra was torched in 2002 triggering riots, MQI (India) president Nad-e-Ali Saiyed said the programme was decided six months ago as these dates were convenient for Qadri.

Saiyed said Qadri had been invited to deliver anti-terror lectures because India was also facing terrorism. “Islam is all for peace. There is no place for terrorism in Islam,” said 50-year-old Saiyed, who has donated 4.5 bighas of his land in Karjan for MQI (India) headquarters.

Yusuf Sheikh and Chirag Sheikh, when contacted, said they were supporting Qadri’s programmes because he had taken a stand against terrorism.

“We are supporting Qadri’s visit because he is working for peace and unity, and taken a strong stand against suicide bombings and terrorism,” said Mehboob Bawa. He added that Qadri had earlier delivered lectures condemning terrorism in the UK, US and at the World Economic Forum meet in Davos in the last two years.

Vadodara district in-charge Superintendent of Police S U Pandey said, “We know about his (Qadri’s) visit and working on the security aspect.”