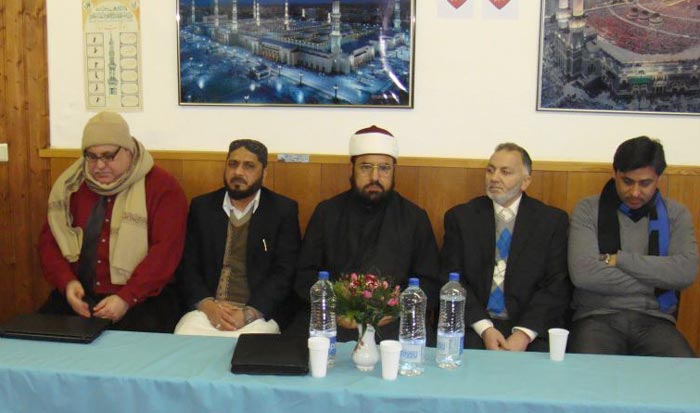 The program was hosted by Mian Imran and started with the recitation of the Holy Quran and continued with various Naat Khwans praising the beloved Prophet Muhammad (SAW). The highlight of the evening was the soul-refreshing Durood-e-Paak which was beautifully recited by Minhaj ul Quran Youth League. The program continued with Hafiz Tariq Ali's speech. In his speech he proudly announced that the Irfan ul Quran course was successfully completed by many participants. Certificates were given and a special certificate of excellent teaching was given to Hafiz Tariq Ali by Allama Hafiz Nazir Ahmed himself.

Then, the Arabic teacher Ustad Darbi gave a speech about the importance of Mawlid in German. The audience was eagerly awaiting Hafiz Nazir Ahmed's speech and their waiting finally came to an end. Hafiz Nazir Ahmed started his speech by informing the audience that the Birthday of the Prophet (SAW) was also celebrated by the Companions and the Prophet (SAW) himself. He continued his speech by saying that Muhammad (SAW) is the master of all the worlds and the prophets He concluded his speech by praising Shaykh ul Islam Dr Muhammad Tahir ul Qadri for his great efforts to revive the Sunna of the Holy Prophet (SAW). The blessed evening ended with prayers. A delicious meal was also served to all participants.