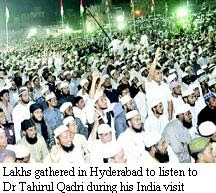 Lakhs of Muslims gathered at Quli Qutub Shah stadium in Hyderabad to listen to eminent Sufi leader Dr Tahir ul Qadri, who is currently on a visit to India.

Sheikhul Islam Dr Qadri, who is remembered for issuing the first fatwa against terrorism, and is considered an authority on Islamic texts, gave a 'dars-e-hadis' or lecture on Hadith.

Dr Qadri, an outspoken critic of Wahabism and Deobandi ideology, said that 'wasila', which is seeking Allah's mercy through Prophet Muhammad, is perfectly justified as per tenets of Islam, and gave numerous examples from Hadith.

The moderate leader said that it was the duty of every Muslim to submit himself to Allah as well as his prophet. Love for Prophet is at the root of Islam and hence the believers must offer 'Salat' and 'Salam'. Dr Tahirul Qadri, who heads the Minhajul Quran international, earlier visited Gujarat during the India trip.

He went to Karjan (Vadodara) where he addressed a huge gathering, and urged them to stay away from communal clashes. Apart from Delhi, he has also visited Hyderabad, Deccan. Qadri who hails from Pakistan and is settled in Canada, had thanked Indian government.

A section had created an impression that he gave a clean-chit to Gujarat government led by Narendra Modi over the 2002 riots. However, the controversy ended after clarification by the Sufi scholar regarding his statement in Gujarat.

He will visit Ajmer (Rajasthan), Mumbai (Maharashtra), Raipur (Chhattisgarh) and Bengaluru (Karnataka) during his visit. Minhaj-ul-Quran that promotes Sufi thought and rejects hardliners is a movement that has branches in nearly 100 countries in the world.