Shaykh-ul-Islam speaks on concept of intermediation in Islam 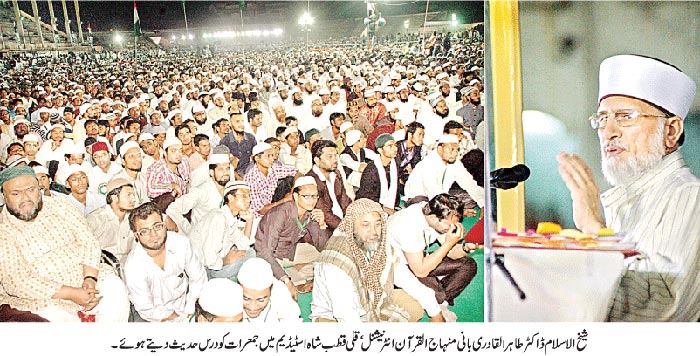 Shaykh-ul-Islam Dr Muhammad Tahir-ul-Qadri, the Founder and Patron-in-Chief of Minhaj-ul-Quran International, has said that the way seeking help and intercession of the Holy Prophet (SAW) continued in his blessed life, in the same way seeking his mediation for forgiveness and expressing one’s want or need at his shrine has also been an established fact in the lives of the Companions, ‘Tabeen and Taba-Tabeen and Jurists on Hadith.

Shaykh-ul-Islam expressed these views while addressing the hundreds of religious scholars on the second day of four-day Hadith session in Quli Qatab Shah Stadium held under the banner of MQI India. Maulana Syed Kazim Shah Pasha, Sajjada Nasheen of Khanqah-e-Muswia, presided over the programme. Shaykh-ul-Islam chose some Hadiths on beliefs from ‘Sihah Sitta’. He delivered a continuous speech for well over three hours and referred to the Holy Quran and Hadith during his lecture.

Imam Bukhari and other hadith-scholars state that when one is confronted with some want or a need, one should offer optional prayer and plead one’s case in the court of the Holy Prophet (SAW). The books on Hadith mention that a blind person made a prayer in compliance with this command during the period of Hazrat Usman Ghani (RA), his sight returned immediately. Allama Ibn Taymiyya has supported this Hadith and an agreement is found among other hadith-scholars on this. This is manifest from this Hadith that Allama Shawkani, who adheres to ideology of Allama Ibn Taymiyya, has mentioned this Hadith in 'Tuhfa al-Dhakireen'. So much so Abdur Rehman Mubarak Puri, a scholar of Ahl-e-Hadees school of thought, has thrown a detailed light on this Hadith which is spread over one and half page in his book. It sufficiently makes it clear that there is no disagreement on this aspect of seeking help and guidance from the Holy Prophet (SAW) during the initial period of Islam.

Quoting from the books on Hadith, Shaykh-ul-Islam Dr Muhammad Tahir-ul-Qadri narrated an incident during the reign of Hazrat Usman Ghani (RA). He told that once a man wanted to meet the Caliph to draw his attention to a pressing issue he was facing but could not meet for many days. Whenever he would go to meet the Caliph, the security guard would return him. This man presented his case in the honour of the Holy Prophet (SAW) after offering optional prayer in accordance with his command. When he went again to meet the Caliph, the same guard escorted him to the court of Hazrat Usman (RA) who resolved his problem there and then. He asked him to come in case he had other problems as he had come with reference to the Holy Prophet (SAW). 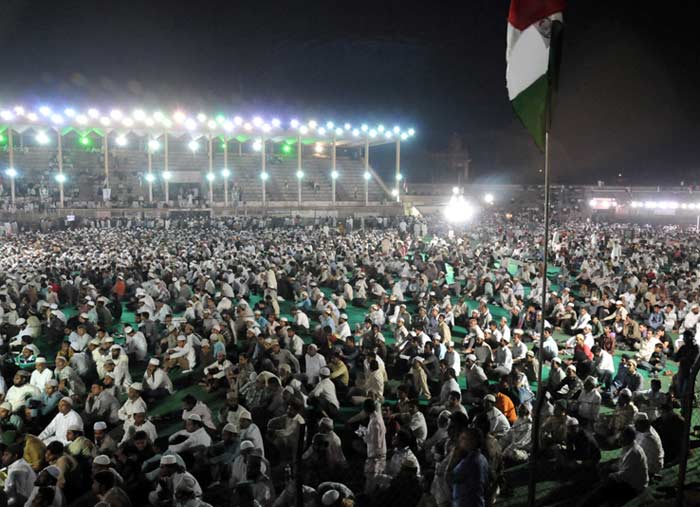 Dr Muhammad Tahir-ul-Qadri gave reference of verse number 64 from Sura al-Nisa and said that when people cause harm to themselves, they should present themselves in the honour of the Holy Prophet (SAW) and seek forgiveness from Allah Almighty. If the Prophet forgave them, they would find Allah Almighty as the Merciful and the One who accepts their repentance. Shaykh-ul-Islam said that this command was the order of the day during the Prophetic period and would continue to hold sway till the Day of Judgment. Imam Abu Abd al-Rahman al-Sulami and Imam Abu al-Qasim al-Qushayri offered the best interpretation of this verse 1100 years ago. Hafiz Ibn Kathir, the disciple of Allama Ibn Taymiyya, also interpreted this verse. Hafiz Ibn Kathir still enjoys considerable influence in the Arab world. Interpreting the verse, he has written that Allah Almighty has ordained the sinners from among the Umma of the Holy Prophet (SAW) that if they committed any sin, they should present themselves in the court of the Prophet (SAW). This command of presenting themselves holds till the Day of Judgment.

Dr Muhammad Tahir-ul-Qadri narrated the incident of three hadith-scholars that they remained hungry and thirsty and complained of the same at the shrine of the Holy Prophet (SAW). They got most delicious food afterwards. They saw that a member of the Prophet’s family brought food for them. He told them that he brought the food on the orders of the Holy Prophet (SAW).

Dr Muhammad Tahir-ul-Qadri narrated yet another incident regarding intermediation through the Holy Prophet (SAW) after his demise from this world. Once the people of Madina suffered from the worst drought, they came to Hazrat Ayesha (RA), mother of believers and pleaded their case. She instructed them to go to shrine of the Holy Prophet (SAW) and that there should be nothing between the sky and shrine. The Companions dug up a hole in the shrine. It rained so heavily in Madina that the entire city became inundated with water. The animals drank to their hearts’ fill. It becomes established from this that intermediation at the shrine of the Holy Prophet (SAW) is the order of the mother of the believers and there is consensus within the Companions on it.

After the speech was over, Maulana Syed Qasim Pasha Qadri paid a glowing tribute to scholarly and intellectual services of Shaykh-ul-Islam Dr Muhammad Tahir-ul-Qadri and prayed for his long life. Maulana Dr Syed Aleem Ashraf Owaisi extended his full support on behalf of the Ashrafia family. The distinguished religious scholars who attended the programme included Maulana Syed Ghous Mohi-ud-Din Qadri, Maulana Qazi Syed Azam Ali Sufi, Maulana Syed Habib Musawi and others. The arrangements for the programme were undertaken under the supervision of Muhammad Ghous and Deputy Floor Leader of Majlis-e-Baldi Party Hyderabad.