Hundreds of the Muslims visited the Redgum Function Centre, Sydney, Australia on Friday, (17th of February 2012) for a prestigious celebration conference to mark the birth anniversary of the Prophet Muhammad (s.a.w.). The Birthday is celebrated by millions of Muslims around the world through recitation of Naat and programs of Mawlid-un-Nabi (s.a.w.). The day is a national holiday in many countries including Syria, Libya, Egypt, Morocco and Pakistan among others and is traditionally referred to as Mawlid al-Nabi. The program started with the recitation from Holy Quran and a Naat by Allama Nazeer ul Hassan Thanvi, who then addressed the conference and highlighted the importance of the Mawlid celebrations. He said that this whole universe was created for the sake of the Holy Prophet (s.a.w.); “we wouldn’t have been created, if the Prophet (s.a.w.) had not been sent”, he said. He added that if we call ourselves the lovers of Prophet Muhammad (s.a.w.), then we must prove that with our actions by practically implementing the teachings of the Prophet (s.a.w.) in our lives. He also prayed for the prosperity of Minhaj-ul-Quran International and Shaykh-ul-Islam for spreading the true message of peace, interfaith dialogue and harmony all over the world. 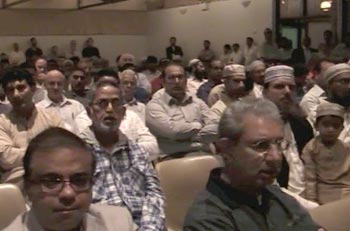 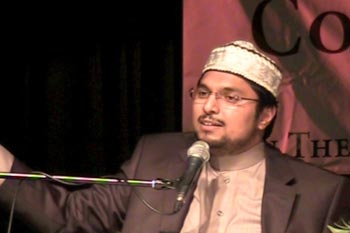 After Maulana Thanvi, the conference was addressed by Hon. Shaoquett Moselmane, Member of the Legislative Council (MLC) of New South Wales Parliament, Australia. He congratulated Minhaj-ul-Quran International (Australia) for organizing the Mawlid conference in Sydney. He said that Prophet’s life was simple and filled with effort for the promotion of peace and “that’s what Minhaj-ul-Quran International and Shaykh-ul-Islam are doing.”, he added. He pointed out that through Mawlid celebrations, Muslims not only celebrate Prophet’s birth but also celebrate his message and his sacrifices that he made for humanity. He told the audience that about two days ago he moved a motion in the Parliament of New South Wales regarding a message of congratulations to the Australian Muslims on the occasion of the Birth of the Holy Prophet (s.a.w.). The conference was also addressed by a guest speaker from UK, Al-Shaykh Mohammad Ramzan Qadri, who congratulated all Muslims on the Birth of the Holy Prophet (s.a.w.) and said that today Muslims living in western countries face many challenges including the upbringing of their children who have all secular and modern attractions around them as well as dealing with the society and people of various religious faiths including Christians, Jews, etc. He emphasised that in today’s modern secular times, one of the most effective ways to protect our children and our faith is to attach ourselves with someone and with some organisation that will help us stay on the path of Islam. He said that in today’s times that person is Shaykh-ul-Islam Dr. Muhammad Tahir-ul-Qadri and that organisation is Minhaj-ul-Quran International. He briefly introduced Shaykh-ul-Islam and Minhaj-ul-Quran International and their services for the humanity and the promotion of peace in the world. He said the message of the Minhaj-ul-Quran International to Muslims is that “be loyal to your Prophet (s.a.w.), wherever you are and whatever you do.” 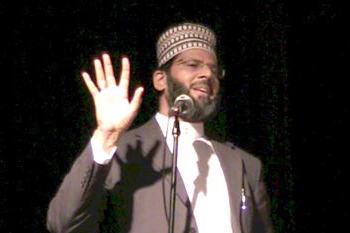 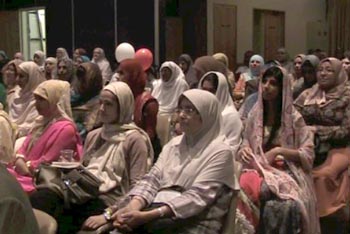 The chief guest of the conference was Sahibzada Hussain Mohi-ud-Din Qadri, President of Federal Council of Minhaj-ul-Quran International (MQI). During his speech on the topic of “Holy Prophet (s.a.w.), the Mercy for the Universe”, he said that according to Imam Nabhani (r.a.), a great sufi of his time, the night of Mawlidun Nabi (s.a.w.) has higher status than the night of Qadr (lalatul Qadr), because on the night of Qadr, Allah (s.w.t.) sends angels to the earth, while on the nigh of Mawlidun Nabi, the Prophet (s.a.w.) who is the Master of all including angels, came to the world. He also mentioned that on the night of Qadr, we pray for ourselves while on the night of Mawlid-un-Nabi (s.a.w.), we pray for Allah’s beloved Prophet (s.a.w.). He said that this became clear as to which night would have higher status in the sight of Allah (s.w.t.). He told the audience that Allah (s.w.t.) Himself celebrates the birth of His Holy Prophet (s.a.w.) and wants everyone in the universe to celebrate the same. He said that Allah (s.w.t.) has introduced His Beloved Messenger to the humanity in Quran as an embodiment of peace and mercy. The Holy Prophet was merciful towards his slaves, his wives, kids; he was merciful towards animals and birds. He mentioned that even all the technological advancements that we see today and that have made our lives easier are because of the mercy of the Prophet (s.a.w.). The Holy Prophet (s.a.w.) gave the mankind the message of knowledge, education, science, technology, and logic. Giving this message to the humanity was being merciful to the humanity, otherwise this world would have remained in the darkness, he added. Sahibzada Hussain Modi-ud-Din Qadri narrated a tradition of the Holy Prophet (s.a.w.) wherein he said that in the last period of my Ummah, people will travel by means of transport other than animals; the knowledge will spread to each and every house pointing to the development of Internet, computers, television, and other media. Through these things, the Prophet (s.a.w.) was giving a great technological vision to the society, to his companions and his Ummah, he added. He said that the Prophet (s.a.w.) talked about spy software, surveillance equipment, counter surveillance systems, security devices, and mechanical and electrical devices over 1400 years ago. That was his vision that he wanted to give to the humanity so that mankind could see the greatest technological and scientific developments in this world. 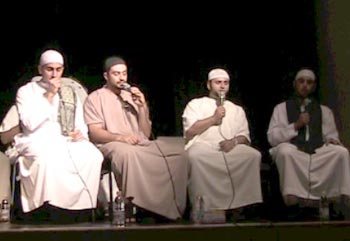 Sahibzada Hussain Mohi-ud-Din Qadri said that today, most of Muslims (99%) are peace-loving human-beings. He said that less than 1% are the extremists, who are giving a bad name to Islam due to their unmerciful and terrorist behaviour and actions. He urged the audience to stand up and join hands together with Minhaj-ul-Quran International to get rid of this bad image of Islam and show the world the merciful side as taught by our Holy Prophet (s.a.w.). He told the audience that Minhaj-ul-Quran International and its founder Shaykh-ul-Islam Dr. Muhammad Tahir-ul-Qadri are spreading the same message of mercy, peace, harmony and love since last 36 years. He said that “anyone who loves the Prophet (s.a.w.) is always welcome to join this organisation because it is the organisation of lovers of the Holy Prophet (s.a.w.).” He finally concluded his speech by congratulating the management of Minhaj-ul-Quran Australia “to hold such a beautiful celebration on the occasion of Mawlid-un-Nabi (SAW)” and prayed that “may this celebration be accepted in the court of the Prophet (SAW).”

Sahibzada Hussain Mohi-ud-Din Qadri is the son of the foremost authority of Islam, Shaykh-ul-Islam Dr. Muhammad Tahir-ul-Qadri – founder and patron-in-chief of the Minhaj-ul-Quran International, the world’s largest non-governmental organisation. During the conference, there were a lot of Naats and Duroods presented on the Holy Prophet (s.a.w.) by several local Naat reciters including Syed Riaz Hussain Shah, and a Maulood group who presented Naats and Nashits on Duff.  The people came from different parts of Australia including Sydney, Melbourne, Brisbane and others to attend the conference, and expressed their happiness and delight to be part of this celebration event. Many people who understand and love the message of Minhaj-ul-Qur’an International and respect Shaykh-ul-Islam Dr Muhmmad Tahir-ul-Qadri and his services but have never met him in person, were very excited to see his son Sahibzada Hussain Mohi-ud-Din Qadri in Sydney and prayed for him as well as for Shaykh-ul-Islam.  After the final Salat-o-Salam and Du’a by Allama Nazeer ul Hassan Thanvi, the program ended and a grand dinner was served to the guests. People also bought several books and video lectures of Shaykh-ul-Islam from the book stalls organized at the conference.