On Sunday 15th April 2012 the Pearls of Knowledge class organized a Mawlid-un-Nabi to commemorate the blessed birth of the Holy Prophet (SAW) under the guidance of Allama Abdul Saeed, scholar of Minhaj ul Quran Bradford. The Pearls of Knowledge class takes place on weekends in which a broad range of subjects are studied such as Quranic Tafsir, Hadith, Fiqh, Arabic, Sarf, Nahv as well as the Seerah of the Prophet Muhammad (SAW). 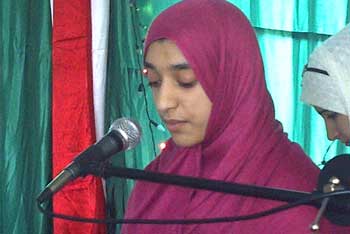 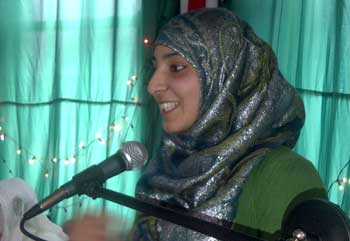 The event was co-hosted by the MYL UK Sisters Bradford Co-ordinator Sister Mariya and Sister Rafia who warmly welcomed and thanked the audience and the women league representatives for making it convenient to attend. The programme commenced by a melodious recitation of the Holy Quran by Sarah Khan. Followed by the recitation, various nasheeds were recited by Ghazala Kanwal, Afra Khan and Sarah Khan. The day consisted of various nasheeds & speeches delivered by the students of the Pearls of Knowledge class covering a broad range of topics such as; the legality of celebrating Mawlid-un-Nabi, the beauty of the prophetic character, the Islamic concept of knowledge in light of Surah Alaq, the peaceful and merciful nature of Islam, advice for students of knowledge and Wilayah/Awliya. 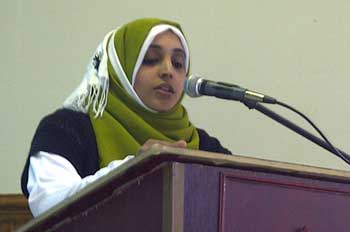 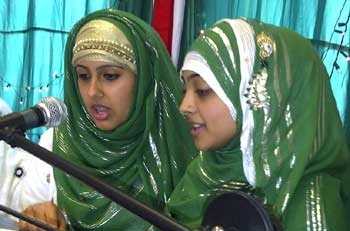 First up to speak, Sabha Imtiaz spoke about the mercy of Prophet Muhammad (SAW) and conveyed how the Prophet (SAW) was a perfect example of a peaceful and merciful personality. Even at times of war the Prophet (SAW) was merciful. She explained how Allah (SWT) is the Master of the Universe, therefore, the Holy Prophet (SAW) was also sent as a mercy for the whole of the universe; his mercy is not just restricted to Muslims.  After Sabha, Afra Khan was invited on to the stage to speak in Urdu about the legality of celebrating Mawlid-un-Nabi in light of the Quran and Sunnah. She emphasized the fact that Allah (SWT) has ordered mankind to celebrate His Blessings and Mercies, and Prophet Muhammad (SAW) is the biggest mercy to mankind so his birth should be celebrated every moment of our lives. 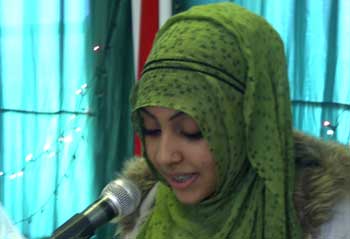 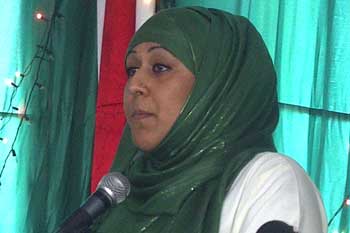 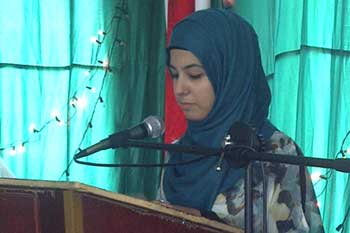 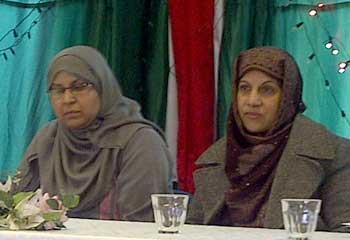 Misbah Wahid then spoke about the Awliya and expressed how Sufism is a fundamental aspect of Islam; she spoke in light of verse 62 in Surah Yunus. The qualities of the Awliya were discussed in detail and she explained how it is the reciprocal bond of love between man and servant which ultimately leads to one attaining the proximity of Allah and experiencing his divine love and majesty. Hence only those people can be considered true Awliya who have travelled the path of Spiritualism, and attained the nearness of Allah (SWT). She spoke about the different categories of Wilayah and also explained the various qualities and characteristics of saints by using anecdotes from the lives of previous prominent Awliya.

Following on from Misbah, Afsheen Shouket addressed the audience by speaking about the qualities of Prophet Muhammad (SAW) such as mercy, compassion and good humour. Her talk was focused particularly on various incidents in the life of the Prophet (SAW) in which the Prophet (SAW) exhibited a peaceful and merciful personality. She spoke about how the Prophet Muhammad (SAW) conducted himself in everyday life; how he treated his friends, family, wives, animals, plants, non-Muslims and slaves as well. Afsheen spoke about how the Prophet (SAW) was the epitome of peace, love, mercy and compassion, and how he cared deeply for all, which is what attracted people towards him. Afsheen urged the audience to adopt the Sunnah of the Prophet (SAW) and linked it to the life of Shaykh-u- Islam and how he is a prime example of a person who follows the Sunnah of the Holy Prophet (SAW).

After Afsheen, Mariya Qadri was invited on to the stage to speak about the blessings and virtues of the city of Madinah. She articulated how possessing extreme love for Madinah is a Sunnah because Prophet Muhammad (SAW) loved the city of Madinah immensely, hence, one should also love Madinah. As she concluded, she urged the audience to visit the Muslim Youth League stall before they left and also to buy the literature of Shaykh-ul-Islam which focuses on and clarifies many misunderstood concepts in Islam. Lastly, Ghazala Kanwal took to the stage and delivered a speech in Urdu. She concentrated on the subject of Tawwassul –using an intermediary. She explained that when one adopts Waseela one is not straying from the straight path as some people often promulgate. She spoke about how we should in fact use Waseela when asking for something from Allah (SWT) as this way our supplications are more likely to be accepted. Ghazala provided the audience with various references from the Quran and Hadith.

To conclude the day, Mrs Jannat Elahi, President of Women’s league Bradford, was then invited onto the stage to say a few words. She appreciated and praised the efforts made by the students of Pearls of Knowledge in ensuring the success of the programme and also thanked the audience for attending. The audience were thoroughly impressed and congratulated the students of Pearls of Knowledge for the success of the programme and their hard work. The London Declaration was also promoted and many people signed up to it as they were leaving. The students of the Pearls of Knowledge class are to be congratulated on their great efforts on working exceptionally hard in making the event a success. A special thank- you goes out to the teacher Allama Abdul Saeed for his hard work and efforts in making the event a glorious occasion.