Scholar to emphasize Islam as religion of peace during Utah visit 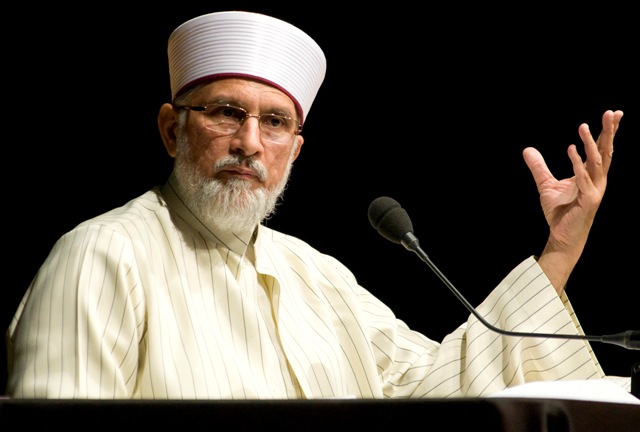 Muslim scholar and jurist Dr. Muhammad Tahir ul Qadri will speak June 16 at the University of Utah.
Qadri is the author of a Islamic religious ruling, or fatwa, condemning suicide bombings and terrorism.

Muhammad Tahir ul Qadri, who wrote fatwa condemning terrorism, will speak at the U.

Muslim scholar Muhammad Tahir ul Qadri has a message for those who believe Islam teaches violence and terrorism.

It’s a message Qadri speaks about often — in lectures and publications heard and read around the world. Famously, he wrote a religious ruling, or fatwa, in 2010 condemning terrorism and suicide bombings.

Qadri will bring that message to Salt Lake City on June 16, when he speaks on "Islam and Peace" at the University of Utah. It’s an event the Al-Mustafa Foundation of Utah, the Salt Lake Interfaith Roundtable and the Peace and Integration Council of North America are holding in hopes of improving understanding of Islam. The event also will be streamed live over the Internet to several other countries.

"[In the] post 9/11 world, the misconceptions about Islam have increased," said Sophia Said, with Al-Mustafa and the Integration Council. "It’s very important to hold such events in which the true Islamic values can be highlighted and those misconceptions can be challenged."

In an interview, Qadri, who now lives in Canada, said his message is twofold.

On one hand, he wants to correct those who twist the words of the Quran, or holy book of Islam, to support violence and extremism. He said he wants to "bring the Muslim youth to normal and true Islamic teachings so they may not become accessible to terrorists or extremists in the future."

"I am targeting those millions of youth, those who have not become violent or extreme or terrorists yet," Qadri said.

But he also wants to show the Western world that Islam does not support terrorism despite the acts of a criminal few.

Few know that better than Qadri.

Islam’s stance on terrorism and suicide bombings was, after all, the subject of his 600-page fatwa in 2010. In the fatwa, he used Islamic scriptures to prove his point.

"Qadri assembled everything he could possibly find that would prove that Muslims, one, should not commit suicide and, two, should not commit terrorism," said Peter von Sivers, associate professor of classical Islamic Middle Eastern history at the U. of U.

In a summary of the fatwa, Qadri wrote: "There is no denying the fact that the vast majority of Muslims oppose and condemn terrorism in unequivocal terms and are not ready to accept it as even remotely related to Islam in any manner. However, a negligible minority amongst them seems to give terrorism tacit approval. Instead of openly opposing and condemning terrorism, these people confuse the entire subject by resorting to misleading and perplexing discussions."

Von Sivers called Qadri "really an extraordinarily learned man," noting that he’s one of the few Muslim authorities with a strong background in both present-day, mainstream Islam, which tends to focus on living according to scripture, and Sufism, an Islamic tradition (no longer accepted by many Muslims today) that emphasizes experiencing divine presence in one’s life. He said Qadri believes that Muslims "should not repudiate Sufism because Sufism is the factor that is the strongest for a peaceful form of Islam."

Von Sivers said many Muslims have asserted that Islam is a peaceful religion but Qadri’s work is "probably the most prominent."

In addition to that fatwa, Qadri has written more than 400 published works and given thousands of lectures worldwide.

The June 16 event will mark Qadri’s first visit to Utah, he said.

Qadri will not be the only Muslim scholar in town this month.

The Islamic Society of Greater Salt Lake also is hosting a dinner June 9, in which keynote speaker Sheikh Karim Abuzaid will speak to the theme of this year’s event, "Good Muslim, Good Citizen," society president Iqbal Hossain said. Abuzaid is the imam at the Colorado Muslim Society.

Hossain said being a good citizen is compatible with being a good Muslim. He said Abuzaid will speak about what Muslims’ roles should be in America in order to succeed. The event’s guest of honor will be Salt Lake City Mayor Ralph Becker.

"It’s a good opportunity for both the Muslim and non-Muslim community to get to know each other a little better," Hossain said of the dinner. "There is no better way to kind of break down some of the mistrust and hostility we see in America regarding Muslims in this country."