The Sharia professor: Death penalty for blasphemy is also in the Bible

On Tuesday Tahir-ul-Qadri will be speaking to an antiradicalization conference in Copenhagen. But he is already in Denmark, and told yesterday about his views on blasphemy.

Fundamentalism: If you reject a ban on blasphemy, then you are in conflict with both the Bible as the Quran, says controversial professor.

On Thursday morning the Pakistani professor Muhammad Tahir-ul-Qadri and his associates were at Hotel Mariott at Copenhagen harbor.

The approximately 150 participants clap insistently, when the charismatic professor emphasizes a point, for example, that Islam supports democracy and equality, or that none of the 35 verses about Jihad in the Qur'an can be interpreted as an encouragement for terrorism.

And when he is done launching his famous fatwa against suicide terrorism, they flock to greet him.

Some other places, he is less popular. In particular, his participation in an anti-radicalization conference on 11th September is met with criticism.

It's his past that causes disorder. For Tahir-ul-Qadri is the founder of the Islamic Minhaj-ul-Quran movement and criticized for his role in the islamization of Pakistan in the 1980`s under General Muhammad Zia-ul-Haq's leadership.

According to Minhaj-ul-Quran`s official website the professor was at that time a legal advisor in Islamic law for the Supreme Court and the Federal Sharia Court of Pakistan, as he at times between 1983 and 1987 was special advisor in >>Islamic curriculum<< for the Ministry of Education.

The professor is called Shaykh-ul-Islam by his followers and you can read on the website that the Federal Sharia Court and Court of Appeal of Sharia law in the 1980s took a number of >>historical decisions<<, and that it happened "as a result of Shaykh-ul-Islam's legal arguments".

The description is repeated word for word in several of the support groups in the movement. However, with a significant addition in the group Islamic Revival:

"In another case, the blasphemy law ... implemented for the first time in the history of Pakistan after Shaykh-ul-Islam presented his arguments to the court over a period of three days", it states.

Back at the Hotel Mariott, the presentation has ended, and there are questions from the audience. JyllandsPosten asks the professor to explain his views on Pakistan's harsh blasphemy law.

However, it is not that simple, says Tahir-ul-Qadri:

"I have given my full view of blasphemy, and it can be found on YouTube. 14 hours of lectures."

He believes, however, that the current rules are administrated incorrectly and need reforms so that they are not misused for example against minorities and other defenseless people, such as the 11-year-old girl with Down syndrome, who is currently facing the death penalty for tearing pages out of the Quran:

"If she is convicted - and it is an unjust conviction - then I will go and fight for her rightsand be her lawyer," promises professor.

He also points out that he only advised General Zia-ul-Haq's government in one case. It was the introduction of a law on blood money, where the professor – according to himself – gave some eight hours “arguments in favor of gender equality" and thus the draft law was amended, so a discount of 50% for female victims disappeared.

A reporter from Politiken is next and asks Professor Tahir-ul-Qadri to tell what the punishment for blasphemy in his opinion should be.

The professor brings forth a sheet of A4 paper and begins to mention verses from the Bible, which he interprets as the death penalty for blasphemy.

"The original blasphemy law was revealed to Moses in the Old Testament," says Tahir-ul-Qadri, adding that it continued with Jesus in the New Testament, where Matthew in chapter 12, verses 31-32 writes that "whoever speaks against the Holy Spirit will not be forgiven in this world or the next."

Follows the Bible and the Quran

This was only continued when the Prophet Muhammad came six centuries later, says the professor, who cannot bring himself to go against blasphemy ban:

Dr. Muhammad Tahir-ul-Qadri (61) is known for his fatwa against terrorism.

Founder of Minhaj-ul-Quran movement, which previously has aroused debate in Denmark.

Advised in the 1980s Pakistani courts of Sharia law and advised at least once the government.

The Council had both invited her and the controversial Professor Muhammad Tahir-ul-Qadri to an antiradicalization conference on 11th of September.

"If he participates, I'll have to say no", she said.

But the council, which is partially supported by lottery funds, upheld the professor's participation, and therefore the minister will not be coming:

"It is very unfortunate that they let him speak," says Støjberg, but doubts Haekkerup's explanation that she did not know the list of speakers:

"Either the minister is not speaking the truth; or they don`t know what, they are doing in the ministry. Of course she should know, who she is going to share the platform with”, says Støjberg, who was minister for 2.5 years until the election.

"I have never participated in any conference where I did not know who the other participants were," says the spokeswoman from the Liberal Party, who will now ask the Minister some questions about the process.

Put them on ice

"We need an explanation as to whom the Council works with and what it`s position towards the extreme Islam is. And until the report is complete, we will put the Council on ice", he says.

She strongly discourages blasphemy rules in Pakistan, but would rather express opposition against them, than stay away:

"Dialogue and bridge building is the way forward. Otherwise we risk pushing our young Muslim citizens into the arms of those who we want to work against", she says. 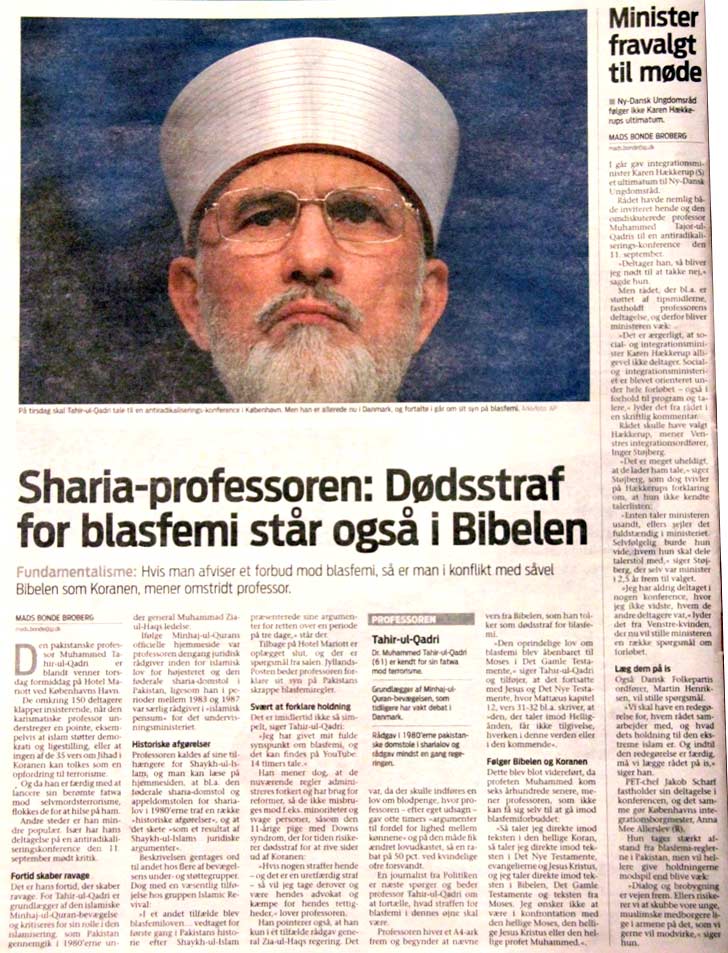