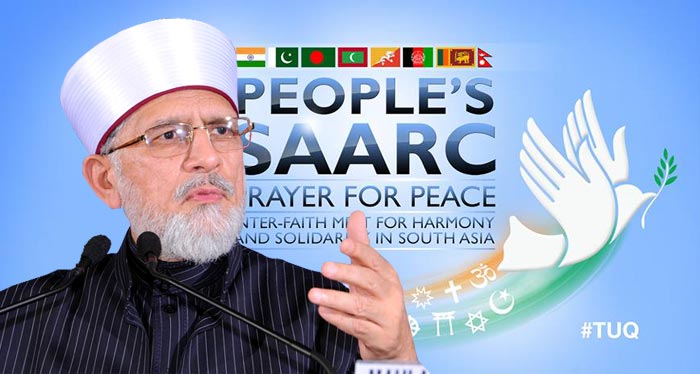 MUMBAI: Anti-terror Islamic scholar Tahir-ul-Qadri impressed a packed conference room at Y B Chavan Centre here on Thursday with his moderate, inclusive and inspiring speech. He was speaking from Toronto (Canada) via video-conferencing as he didn't get a visa attend a roundtable discussion on People's SAARC, an interfaith meet for harmony and solidarity in South Asia.

Qadri denounced terrorism, corruption and wanton violence in the world, especially South Asia. Stressing the need to rescue jihad, which according to him, has been misused by some misguided men, he said: "Jihad has been hijacked and we have to get it back from the terrorists."

Qadri paid tribute to the victims of 26/11 terror attacks in Mumbai with a minute's silence. Quoting scriptures, including Quranic verses and the Prophet's traditions, Vedas, Bhagwat Gita, Bible and Mahatma Gandhi, the scholar said that promotion of good and rejection of evil was the motto of all religions.

"The message of love, truth, brotherhood, piety and freedom of thought is common to every religion," he said. Calling upon the people of South Asia to stand in solidarity against hatred, communal violence and terrorism, he said that Asia gave birth to founders of all the major religion in the world and the region could lead humanity to freedom from poverty, illiteracy, ignorance and terrorism.

Hindu scholar Swami Chidanad Saraswati requested the faith leaders to bring back the misguided youth who have become extremists. "Bring them back home. They are our boys," said Swami Saraswati who heads Rishikesh-based Parmarth Niketan Ashram. Archbishop of Bombay Cardinal Oswald Gracias said that peace is not absence of war. "Peace means presence of God within us," he said.