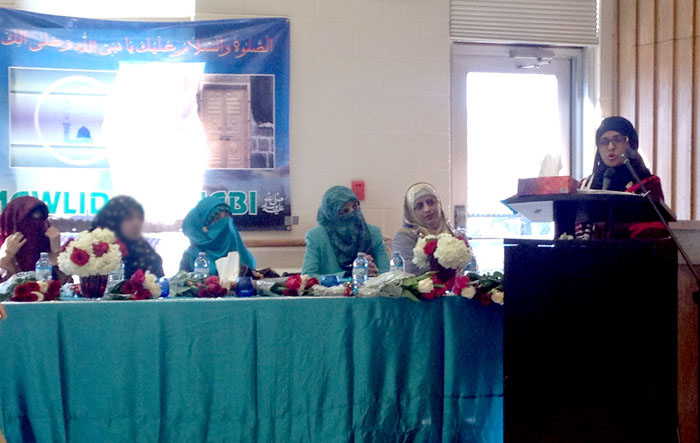 Sister Almaas hosted the program. Her manner of conducting the programme was especially appreciated by Mrs Ghazala Hassan Qadri as she created a spiritual atmosphere with her moving poetic verses. Her words took the audience back to the city of Madina, rekindling the hearts with the love of the Holy Prophet (SAW).

The program commenced with the beautiful recitation of the Holy Quran by Sana Shafiq. It was followed by Nasheeds recited by renowned Naat reciters in Toronto including Sister Muniba Gul, Sister Raheela Rashi, Sister Shahbana Mughal, Sister Mariam, and Sister Pakeeza Muneer.

The program came to its spiritual climax when Minhaj Women Naat Council of Canada: Sisters Seema Razi, Shama Basir, Asma Tariq, and Mehwish Raheel, revitalized the crowd by reading beautiful nasheeds in a melodious manner for the beloved Prophet (SAW).

Mrs. Razia Syeda, President of MWL Canada, came and welcomed all the sisters who came to the program from the local vicinity and from afar. She also thanked all the volunteers who helped organize the conference. Mrs. Razia Syeda then gave a descriptive introduction on the mission of Minhaj ul Quran, including its aims and objectives. Following her talk everyone turned their attention to the projector screen and watched a 10-minute documentary on the personality of his eminence Shaykh ul Islam, Dr. Muhammad Tahir ul Qadri, highlighting the key historical events in his life that has changed the course of events in Pakistan and elsewhere.

After anxiously waiting, the keynote speaker, Mrs. Ghazala Hassan Qadri, was then called on stage to give her speech on the topic of ‘Islam, Peace and Violence’. Her speech was specifically targeted towards the youth in the Muslim community. In the light of recent events, her topic was relevant to the current events pertaining to Muslims and global issues. She began by categorically condemning the actions of terrorist groups and organization like Al-Qaeeda, ISIS, Boko Haram and Taliban. 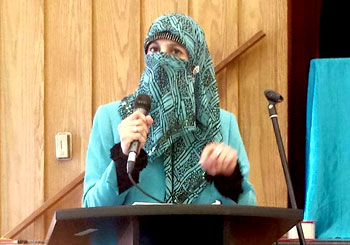 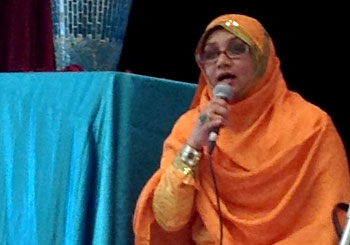 She made a powerful assertion that actions committed by such groups had no roots and or basis on the true teachings of Islam given to us by our Beloved Prophet (SAW). She narrated a hadith on the authority of Anas bin Malik (r.a) that the Holy Prophet had stated: “There will come a time in my Ummah when there will be nothing left of Islam but its name. And nothing left of the Holy Quran but its letters. Many mosques will be built but they will be empty from guidance. No hudood/limits will be established and they will not call to Islam nor command the good or prohibit the evil. They will be the worst of creation.” She asked the sisters if this is the crowd that we wanted to be part of; the worst of creation?

One of the key points that Mrs. Ghazala Hassan Qadri highlighted was the absence of true Islamic guidance from our mosques. She pointed out that our mosques are misguiding the youth of today. They are teaching things that are not in the Quran, not in the hadith and not in the sunnah of the Holy Prophet (SAW). Yet we are ignorant because we lack the knowledge. Furthermore she narrated a hadith from Sunan Abi Dawud and Imam Bukhari: Once Allah (swt) sent angels to destroy a village because many of them had gone astray. When the angels went to that village they saw that there were people praying and worshipping Allah (swt). The angels thought to themselves, ‘How can we destroy this village?’ So they returned to Allah (swt) and stated, “Oh Allah, there are people there who worship you.” He replied, “Destroy them first. Why? Because there was fitna (mischief) all around them, people were committing wrong deeds but they did not raise their voice and they did not do anything. They did not care.”

Mrs. Ghazala Hassan Qadri questioned the audience to assess their life, if they were among those who are spreading the true message of Islam or were they among those who pray, fast, and perform worship and that’s it, nothing more. 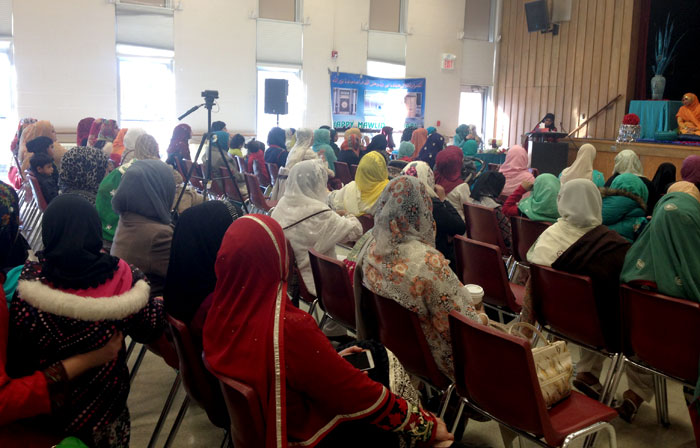 She emphasized that the way to go forward was through knowledge, so we need to gain knowledge. One of the best ways is through books. If we want to know what Islam says about terrorism, suicide bombing, what Islam says about ISIS, what Islam says about torture then we need to have these books in our house. She drew the attention of the audience to the many ground breaking works of Shaykh ul Islam Dr Tahir-ul-Qadri that have been compiled in the last decade to challenge the notion of extremism, radicalization and terrorism and to equip the Muslim ummah, particularly the youth, with the true Islamic knowledge. She introduced: “The Fatwa Against Terrorism and Suicide Bombing”, “Muhammad the Merciful”, “Islam on Mercy and Compassion”, and the “Irfan ul Quran” in which Dr Tahir-ul-Qadri has cleared the misunderstandings of the verses that have wrongly been translated to justify the actions of radicals and extremist organizations.

Mrs. Ghazala Hassan Qadri said that we needed to be careful about ourselves and our children. If we are questioned about Islam and we can’t able to answer, what excuse do we have? Knowledge was there, knowledge is readily available to us; hence our negligence in learning our religion will be the end of us. She made an imperative assertion that sisters these days know about the latest fashion, the latest trends, and the latest material in the market. They know everything but they know nothing about Islam. Nothing about what it represents.

In the light of recent events, Mrs. Ghazala Hassan Qadri made it clear that Muslims today severely lack the proper understanding of their own religion. Moreover mosques and Muslim leaders have failed to adequately equip the youth and the Muslim ummah with the true information to know about their religion. She drew many great examples from the Holy Quran and the hadith of the Holy Prophet explaining the true essence of Islam. She explained that Islam was built upon the foundation of Islam, Iman, and Ihsan.

Islam means peace, protection, safety and security. She quoted the hadith from Imam Nisai from Kitab ul Iman stating, “The Muslim is he from whose tongue and hands all people are safe.” She further explained that the word Iman means peace and protection. Hence a believer is he who provides peace and protection to others and a true believer is he, whom you can trust with your blood and property. She then stated that it was a great tragedy of this ummah that today there are very few people who will trust a Muslim with their life and property. 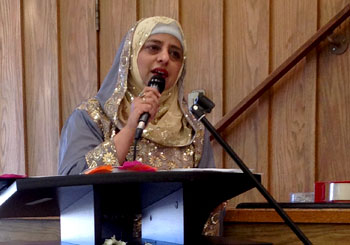 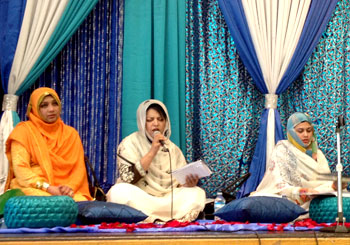 Mrs. Ghazala further narrated a hadith of the Holy Prophet where the blessed Messenger of Allah stated three times: “By God that person is not a believer” when the companions asked, “Who, Ya Rasulullah?” He replied, “By God that person is not a believer whose neighbour is not safe from his hurtful behaviour” and according to the Great Imam Zain ul Abideen (r.a) a neighbour is defined as one who resides 40 houses to one’s right, 40 houses to one’s left and 40 houses ahead, and 40 houses behind; therefore it is a whole community that must be kept safe and secure from the actions of the believer. She finally spoke on Ihsan which is defined as beauty, balance, betterment, benevolence, and piety. Unless these qualities are maintained and found in a Muslim, he or she has not fully understood or embodied the message of Islam.

Allah (swt) says, “Only those with a peaceful heart will enter jannah.” Then how can these terrorists commit such atrocities and chaos, yet believe that they are promised jannah? She asked the audience to reflect in their own lives and assess whether they propagate peace in their life and in the lives of others, as Allah (swt) has ordained us to live in peace and provide peace in this world.

Mrs. Ghazal Hassan Qadri drove home the point that as Muslims we must represent Islam, the true Islam the Islam the Holy Prophet gave us because that is the criteria of success. If we want to be successful then we must fulfill our responsibility. She stated that when someone dies, we always state surely we belong to Allah (swt), He created us and He owns us so to Him and Him alone do we return. On the Day of judgement each and every one of us will return to Allah (swt) and we will be asked, “Did you present the teachings of my beloved? Did you tell others about the true teachings of Islam? When they (people) were misrepresenting Islam, did you reject them with sound proof and evidence or did you ignore it and turn to the other side.”

Mrs. Ghazala Hasssan Qadri concluded her speech with a short supplication and advice for all the sisters attending the conference to arm themselves against ignorance, extremism and radicalism with the weapon of knowledge. What was this weapon? She stated they were books. We need to educate ourselves. She reiterated how important it was for us to educate ourselves and fight against extremism, violence and misrepresentation of Islam with proper true teachings of Islam taught to us by our beloved, Holy Prophet (SAW).

After an energizing and thought provoking speech by Mrs. Ghazala Hassan Qadri, the sisters held a quick lucky draw for all the participants who attended the Conference. Greetings and salutations were sent on the Holy Prophet (SAW) followed by Dua. 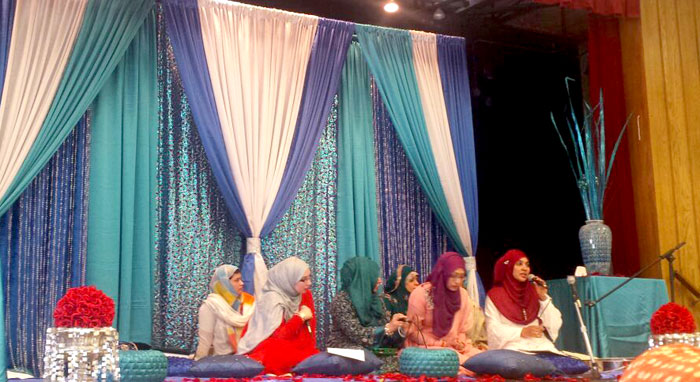 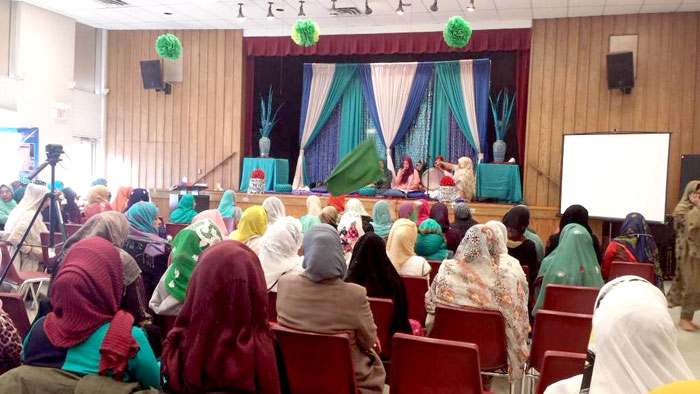 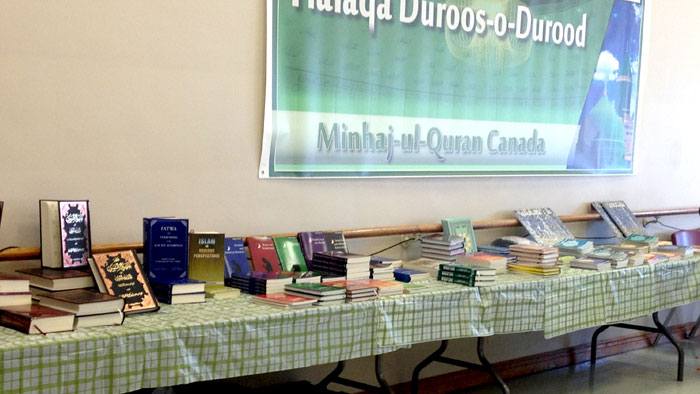