Scots Muslims warn airstrikes on Syria will cause backlash 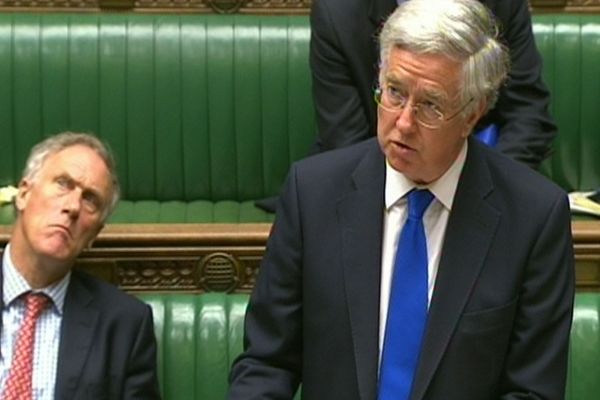 YOUNG Muslim leaders have warned against the UK carrying out airstrikes in Syria saying the move would fail to curb the rise of the terror group Daesh.

Senior members of the community said the intervention would inevitably lead to a “backlash” against the west and stoke up further support for the extremist organisation among Muslim youths both in Britain and in the Middle East.

Ahmed Khweir, youth co-ordinator of the Islamic charity Ahl-al-Bait, and Rehan Ahmed Raza, of the Minhaj-ul-Quran and president of the Muslim Youth League UK, spoke to The National as Defence Secretary Michael Fallon yesterday raised the possibility of airstrikes in Syria.

Fallon, pictured above, told MPs the government would put any potential military action to a vote in the House of Commons, but only after there was a consensus.

But Khweir and Raza, who held a press conference in Glasgow to condemn last week’s terrorist attacks in Tunisia, France and Kuwait, said he believed the action would be counter productive and said airstrikes in Iraq and Libya had made the situation worse.

“Speaking on a personal level I have yet to be convinced that airstrikes or any military action by western powers can be a positive intervention in the region,” said Iraqi-born Khweir.

“In Iraq, the US was meant to use their ability to carry out airstrikes against ISIL but from what I am told by people on the ground they have done little to stem the tide of extremism which is spreading. I am very sceptical and think it would be potentially even more disruptive to what is happening in Syria.”

He added: “Look what happened in Libya.

“It was thought that airstrikes would stop the rise of extremism, but instead they just created a more underground movement of extremists.”

Raza urged politicians not to react “emotionally” to the situation but to think through the consequences of military action – which could be used by extremists’ leaders to promote further radicalism among young Muslims.

“Looking at the previous record in terms of airstrikes, it is very important that decisions are made wisely and that they do not cause a backlash,” he said.

“One of the things those who are trying to radicalise young people do, is point to airstrikes by the West. We must not be emotional in our decisions, we must be rational.

“Airstrikes need to be targeted and not affect civilians, but... over the years far more civilians have been killed from airstrikes than terrorists. Rather than mending the situation, it may make the situation worse.”

Khweir and Raza both condemned the terrorists attacks last week in Tunisia, France and Kuwait and raised the need for a political strategy which worked with Muslim organisations to try and find a solution to the crisis.

“We strongly condemn the acts of brutality which left the whole world shocked and our condolences go out to the family members whose loved ones have been victims of such heinous crimes,” said Raza.

“We hope the perpetrators are brought to justice. It is time to unite and defeat these terrorists who are plaguing society and threatening global peace.”

At Westminster yesterday, Labour, who previously voted against Government military involvement in Syria, indicated support for airstrikes. But the SNP stressed caution, warning of the complexity of the situation.

Fallon said the Government wanted a “full-spectrum response” to dealing with Daesh after the massacres last week.

He said: “We know that ISIL is organised and directed from northern Syria. That is why the Prime Minister said during last September’s debate on taking military action in Iraq that ‘there is a strong case for us to do more in Syria’. However, he recognised the reservations that some Members had, and we will not bring a motion to the House on which there is not some consensus.”

The Defence Secretary continued: “However, this is a new Parliament and it is for all Members to consider carefully how best to tackle ISIL, an evil caliphate that does not respect state boundaries. Therefore, our position remains that we would return to the House for approval before conducting airstrikes in Syria”.

Fallon added that any action taken by the UK, “must not provide any succour to Assad or his regime”.

Responding for the SNP, foreign affairs spokesman Alex Salmond cautioned the Government: “I am sceptical about the basis for the extension of the United Kingdom’s participation in an air campaign in Syria.

There are questions that I think should be considered, and considered profoundly.”

Salmond said the Government needed to be aware of the legality of any action and to consider the consequences of any action.

The Gordon MP added: “We are sceptical and opposed in the current circumstances to extending the air campaign into Syria.

“We would have to see the legal basis, and the practicality would have to be much better understood. In particular, a great deal of my experience in this House, and our experience collectively as a country over past years, tells us that interventions can have unforeseen consequences.”