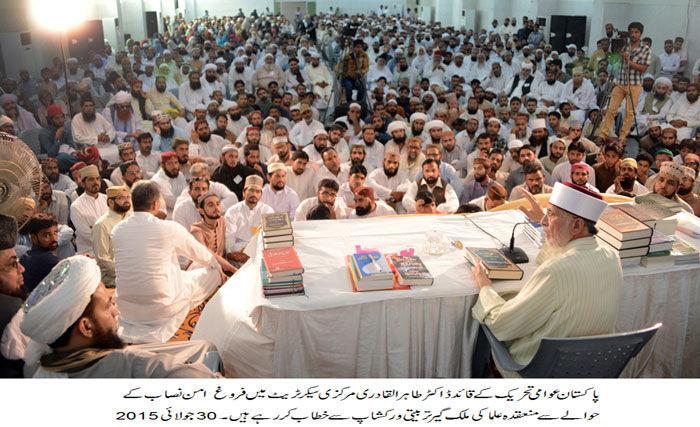 LAHORE: [30-07-15] If the civilian government fails than it is time for an operation, this was stated by Dr. Tahirul Qadri, the chairman of Pakistan Awami Tehreek here on Thursday during a press conference at the Model Town party secretariat.

Commenting on the JC report on election rigging the PAT chief said that the publication of its report has weakened democracy and it has served the interest of those who committed rigging during the 2013 elections. He said different allegations have been aired against me and one of those was my meeting with former DG ISI Gen Pasha. The PAT chief said that he has never met and neither has he ever spoken to the general on phone and all the allegations are baseless and without any substance. He said the march was for the people of the country. He said he has laid before the people of the country a curriculum against terrorism and sectarianism and in this regard we have started workshops for Islamic clerics countrywide. He said the Ulema have a very strong role to play in the fight against terrorism. He said his fight against terrorism and corruption continues and even today he wears the ‘kafan.’

PAT president Dr. Raheeq Abbasi, Dy General Secretary Amir Fareed Gorraya and Information Secretary Noorullah Siddique were present during the press conference. To a question the PAT chief said that we knew beforehand that the rulers will never afford giving us justice and that is the reason we never appeared before the JC and the JIT. He said this is the same advice I gave to Imran Khan. He said the national leadership gathered at the PM House only to teach their opponents a lesson. He said these naive politicians think that all the worries of the people of the country are the responsibility of the Army and not theirs. He said these politicians just don’t have the acumen and capability to understand the issues faced by the people. All they do is plunder the national wealth and collect commissions, he said and added that all these politicians gather on one platform against anyone who tries to stand up for the rights of the people. He said that the floods are due to inability of the rulers to understand the core issues and each year they visit the flood affected areas, get photographs taken and give false hope to the people and distribute cheques that never get cashed. He said the rulers have been playing with the rights of the people of South Punjab for over 30 years now. He questioned that why is it that every year the farmers of South Punjab lose their crops to floods? He said when we come the world will witness that neither will floods come and neither will anyone lose their properities and belongings and neither will we ever see any sort of corruption.

Answering a question the PAT chief said leave along buying or taking over the revolution movement, why don’t the rulers try to buy the lowest paid guard who protects me. He said despite several efforts and offering different kinds of bribes the rulers have failed to get the loyalties of the families of the Model Town martyrs. He said our movement continues and further line of action for sit-ins and long marches will be devised according to the requirements of time and the party.