National tour for Mega Project kicks off in Luton 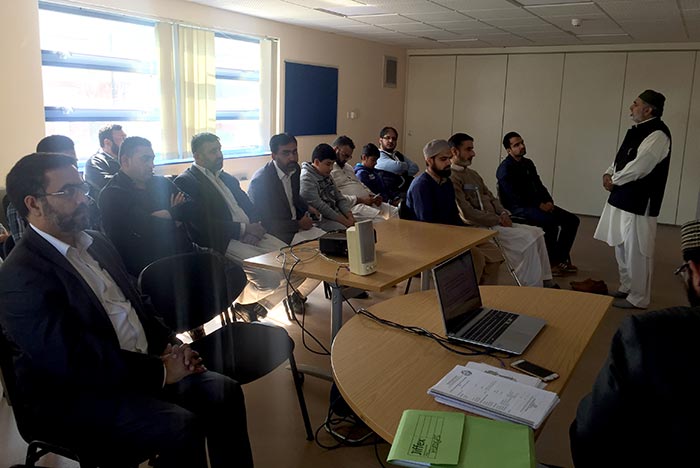 On Sunday 6th September 2015, the mega project team led by Project Director Allama Afzal Saeedi along with core committee members Seerat Ali Khan and Huzaifa Al Yamani commenced its national tour of the Mega Project from Luton. The aim of the visit was to inform all those present about the new and exciting projects of Minhaj ul Quran International. The Mega Project is an exciting new initiative that will, InshaAllah become one of the largest projects of Minhaj ul Quran outside of Pakistan.

The meeting commenced with the recitation from the Holy Quran followed by collective recitation of salutation upon Holy Prophet Muhammad (P.B.U.H).

Allama Afzal Saeedi welcomed those present and began the meeting with an introductory overview of the Mega Project. A brief historical re-cap was shared, mentioning that since the successful purchase of the land 2 years ago the discussions have been going on with architects, consultations and the local authority on planning, architecture and design. Allama Sahib mentioned that whilst some delays were enforced (political situation in Pakistan), significant developments have taken place in terms of developing a concept for the Mega Project.

He mentioned that discussions have taken place with numerous officials and more importantly with Shaykh ul Islam Dr Muhammad Tahir ul Qadri and Dr Hassan Mohi-ud-Din Qadri. He said that their vision and directions have guided the development of the project.

To re-cap, a short video clip was played following a meeting with MQI members in London with Shaykh ul Islam Dr Muhammad Tahir ul Qadri. The key points emerging from the clip were importance of the Mega Project, the governance arrangement and the future developments of the project. Emphasis was made that although Allama Muhammad Afzal Saeedi Sahib will be Project head, the accountability and responsibility for the success of the project is collective and all members will be required to play active and proactive role. It is evident that the future success of the project is dependent upon the collective efforts and commitments from all members.

Allama Sahib then further elaborated that at this moment in time, fund raising and project awareness is a key priority. In this regard a focused campaign of project awareness and fundraising is taking place, which explains this visit to Luton.

Allama Sahib explored a number of options for fund raising. However a kind request was made that all those present begin with a regular monthly donation through a standing order. One of the ideas of involvement of members is to get them to be part of the project by making a small but regular contribution towards the mega project. He also encouraged each and every member to become an active ambassador for the Mega Project to disseminate message about the project, to enrol family and friends on the monthly direct debit scheme.

At the end a question and answer session was held to further clarify about the Mega Project. At the end Allama Sahib once again thanked everyone for their attendance and offered dua for MQI Luton for hosting the gathering.