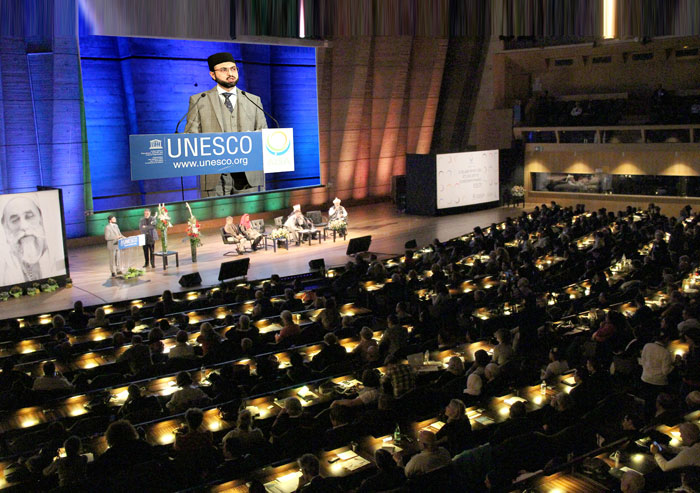 Dr. Hassan Mohi-ud-Din Qadri, Chairman of MQI Supreme Council, addressed the UNESCO Conference in Paris, France. He started his speech in Arabic by congratulating the organizers of the event with reference to the 100th anniversary of the Alawi Sufi order.

Dr. Hassan Qadri quoted Surah 2 Verse 51 of the glorious Quran “Likewise, We have sent you (Our) Messenger a from among yourselves who recites to you Our revelations and purifies and sanctifies (your hearts and ill-commanding selves) and teaches you the book and inculcates in your logic and wisdom and enlightens you (on the mysteries of spiritual gnosis and divine truth) which you did not know”

He elaborated on this Quranic verse by explaining that the main prophetic obligation of the Holy Prophet (PBUH) was that he used to recited the holy Quran to the Ummah; the second was that he used to purify the companions’ hearts, souls, intellect and inner-self; the third was that he (PBUH) provided them with the wisdom and the knowledge. He said that these were the major prophetic obligations which were accomplished in order to remove the thought of extremism and the approach of radicalism from society. He said that the Holy Prophet (PBUH) implemented these obligations with a global aim, to establish a peaceful and balanced society. In the discharge of these obligations, he implemented these on the concept of religion of Islam, which is based on three components namely, Iman, Islam and Ehsan, which were derived from Hadith-e-Jibrail.

The angel asked about Islam, Eman and Ehsan. First, he asked, ‘please inform me regarding Islam, that what is Islam?’ Replying to the angel Gabriel, the Prophet (PBUH) described the basic practices of Islam; the faith in oneness of God (Shahadah of Tawhid), establishment of prayer (Risalah, Iqamah), fasting, performance of Hajj and giving alms-due.

Then Jibrail asked the third question, “Please inform me about Ehsan”. To this reply, the Holy Prophet (PBUH) stated: spiritual excellence requires that you worship Allah as if you see Him, but if you do not see Him, then you must know that He sees you. So the Prophet (PBUH) explained ‘Ehsan’ as the inner states of the heart and the spiritual experiences pertaining to the Din, which brings about the purification of the inner self, spiritual elevation, stability and strength in the human character.

Dr. Hassan then stated that these fundamental components can be traced in the glorious Quran. Regarding the first grade, which is Islam, Allah Almighty says in the Glorious Qur’an: ‘Today, I have perfected for you your religion and I have completed the bestowal of My mercy upon you, and I am pleased to choose Islam as your religion.” (Surah 5 Verse 3)

Dr. Hassan then stated that about the second grade which was is Eman, Allah Almighty says in the Glorious Qur’an: “But Allah has blessed you with the love of faith and has embellished it in your hearts” (Surah 49 Verse 7).

He explained that in this verse, Almighty Allah has chosen two words to explain Iman; one is love and the other is beauty.

Ehsan which is the third and excellent grade of the religion of Islam is imbued with the concept of eliminating mischief and corruption from the world. Almighty Allah states:

“And do (such) good (to the people) as Allah has done good to you. But do not look for (ways to spread) evil and terror in the land (through oppression, accumulation of wealth and exploitation.” (Surah 28 Verse 77)

Dr. Hassan Mohi-ud-Din Qadri said that this verse ordains the believers to adopt the practice of ‘Ehsan’ and to eliminate corruption, violence and oppression from the world. He further elaborated that the concepts of ‘Islam, Eman and Ehsan’ are the three grades of Din that construe the accomplishment of Prophetic obligations. In that, the step of purification includes subjects of spirituality.

The Prophet used to purify the hearts, souls, intellect and inner selves of the people. Then he used to give knowledge and education to his Companions Through his recitation of the Quran, others began to memorize the Holy book. When the Prophet (PBUH) taught the commandments of the Quran, the scholars, writers of Quranic exegesis, compilers, and narrators emerged.

The wisdom mentioned in the Quranic verse is the great blessing of Allah. When the Prophet (PBUH) spoke about wisdom and strategy, through his grace, the jurists and revivalists came. With the Prophet’s attention and purification of his Companions, and through the Companions’ spiritual teachings, the saints came into existence and through his grace, the historians, psychologists, scientists, and the knowledge of whatever education that exists in this world, came into existence.

Dr. Hassan Mohi-ud-Din Qadri shed light upon the people of ‘Ehsan’. He said that the people of Ehsan are those who practice Ehsan in their life and practically go through all the stages. They develop the cognizance of the subject and have full awareness of the minor details and are the ones who hold the academic command of the subject in their knowledge and their practice. When we get the knowledge from them on this particular subject, this process is rendered into spiritualism, which Dr. Hassan elaborated on by quoting definitions of renowned spiritualists regarding spiritualism.

Dr. Hassan delivering his speech on the topic "Sufism, A Way of Recource" at #UNESCO in #Paris, #France. pic.twitter.com/B1BA4MtHqi

Dr. Hassan said that if people focus on just one or two aspects of Islam, the attitude will cause them to lose balance in practicing the faith. If compartmentalization is allowed to grow unchecked, it leads to extremism, radicalism, extremism and retreat from a society. He said that in short, extremism leads to ruination and in order to maintain a balance in society, the believers are prescribed to engage in acts of worship and asceticism in moderation.

Dr. Hassan Mohi-ud-din Qadri quoted references in which the lessons and message to practice, preach and worship via moderation were ordained by Islam and followed by a comparison to today’s unfortunate examples of extremism and unbalance in society due to negligence of the Islamic teachings and values. He said that the modern world has clasped in the jaws of extremism, radicalism and terrorism which is now heading towards its final catastrophe.

Dr. Hassan said that the balance has been lost, and, most tragically, the image of the message of Islam too has been distorted due to misinterpretation and misrepresentation of Islam, extremism and radicalism has replaced moderation, tolerance and moral excellence. Beyond bloodshed, carnage and massacres, the hounds of terrorism are now heading towards the world economies to devour the resources of human survival and that the materialistic monsters are engaged in obliterating the spiritual and moral values, brutally violating human rights.

Dr Hassan Mohi-ud-Din concluded by saying that Shaykh-ul-Islam Dr Muhammad Tahir-ul-Qadri has designed the Islamic Curriculum on Peace and Counter-Terrorism to be taught to all the significant cadres of society including the youths, the teachers and scholars, imams, lawyers, the soldiers and commanders and professionals. The syllabi he has designed comprising books in English, Arabic and Urdu, while 25 text books have also been published in English, Urdu and Arabic on subjects that encompass the three grades of Din, Islam and Ehsan in particular.

These books include Righteous Character and Social Interactions, Peace Integration and Human Rights, The Virtues of Prophetic Miracles, Muhammad the Merciful, Islam on Mercy and Compassion, Muhammad the Peacemaker, Islam on Serving Humanity, Islam on Love and Non-Violence and Human Rights in Islam in addition to numerous other works that abound in teachings of the Quran and Sunna.