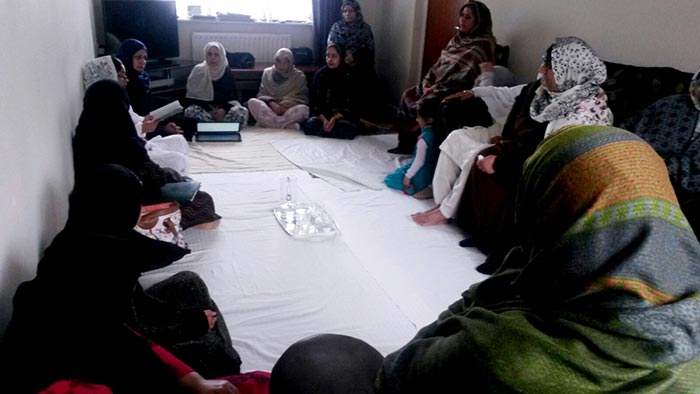 On the 25th of October 2015 onward, MWL Burnley held Muharram gathering. It was attended by twenty three sisters. The program began with melodious recitation of The Holy Quran by Sister Aaiza Iqbal (Youth League Burnley).

This was followed by heart touching ‘Manqabats’ remembering the sacrifices of Hazrat Imam Hussain (AS) and his family and companions. These were recited by Sister Aaiza and Sister Rabbia Iqbal and other local sisters.

Beautiful Naats were recited by many sisters including Sister Zahida Iqbal and Sister Humaira Tasneem sending praise upon our Beloved Holy Prophet Muhammad (Peace and Blessings upon him) in the blessed gathering.

The program then concluded with a DVD clip shown from a lecture by Shaykh-ul- Dr Muhammad Tahir-ul-Qadri. The speech touched the hearts of the sisters as they listened to the emotional and tragic events that unfolded during the days of Karbala. The honour and sacrifice of Imam Hussain (AS) shall never be forgotten.

The grandson of the Prophet Muhammad (PBUH) rose against tyranny and oppression to reject the rule of corruption and falsehood forced on the nation by the evil dictator Yazeed. It was a battle of good against evil. In an unequal balance of power, Hazrat Imam Hussain (AS), the leader of the oppressed, refused to bend to a tyrant ruler; thus sacrificing his life and the lives of his sons, brothers, relatives and brave companions for sake of Islam. And today they are the eternal Martyrs of pride, dignity, freedom and justice.

Many non-Muslims have also paid tribute to Hazrat Imam Hussain (AS). This is a quote by Charles Dickens: “If Hussain had fought to quench his worldly desires, then I do not understand why his sister, wife and children accompanied him. It stands to reason therefore, that he sacrificed purely for Islam.”

Greeting and Salutations were recited upon the Beloved Prophet (Peace and Blessing upon him). Finally the Dua was made followed by food that was served to all sisters.