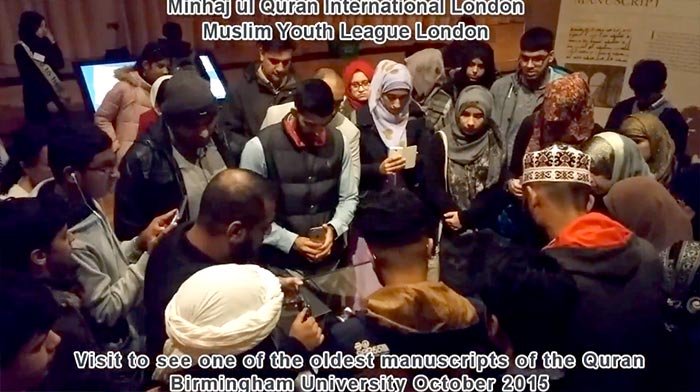 This manuscript of the Qur’an is being looked after in Birmingham University. The Qur’an manuscript is part of the University’s Mingana Collection of Middle Eastern manuscripts, held in the Cadbury Research Library. Funded by Edward Cadbury, the collection was acquired to raise the status of Birmingham as an intellectual centre for religious studies.

Both brothers and sisters took the opportunity to visit one of earliest dated manuscripts of the Qur’an. After the Fajr Dawn prayer, the participants left for the open air of Birmingham to view the fragments of the Qur’an. The journey began with an explanation about the fragments that would be witnessed along with a brief history of how the Qur’an was compiled by Ismail Sethi. Brother Ismail mentioned that the Qur’an was memorised by many companions at the time of the Prophet (Peace and Salutations be upon him and his family). However, many of these companions became martyrs in battles and this is when Abu Bakr Siddique (RA) ordered all the people who had memorised the Qur’an and also those who had written parts of it on various materials to gather them together and compile it into a book form. He also mentioned the important role that one of the earliest key scribes, Zayd ibn Thabit (RA), played in the compilation of the Qur’an along with Umar ibn al – Khattab (RA).

After the explanation, Hafiz Hassan recited Surah Taha both on the way to and from Birmingham while the travellers listened attentively. As the coach came to a standstill at Birmingham University, the privileged travellers became increasingly excited and anxious at the thought of coming closer and closer to seeing the fragments. That was only underscored by the respect which was witnessed when the actual viewing of the Qur’an was taking place. A student which was carrying out research on this fragment of the Qur’an explained that the verses were written with ink on parchment leaves in an early form of Arabic known as Hijazi. She also explained it is most probable that these fragments were handwritten by the Prophet’s (Peace and Salutations be upon him and his family) companions.

As the blessed travellers viewed the Qur’an fragments, both members of the public and the organisation of Minhaj ul Qur’an were privy to a special recitation of the verses written on these fragments by Hafiz Hassan. After the beautiful recitation, another pearl was the beautiful Salam, ‘Ya Nabi Salaam alayka’ which was recited collectively by the participants.

One important thing about this special journey is this whether you are a Muslim, Christian, Jew, Hindu or a person who ascribes to a different or no faith at all, one thing is clear, to be able to come in to contact with a religious text that has been kept in its original state is a special opportunity that all individuals should be exposed to. 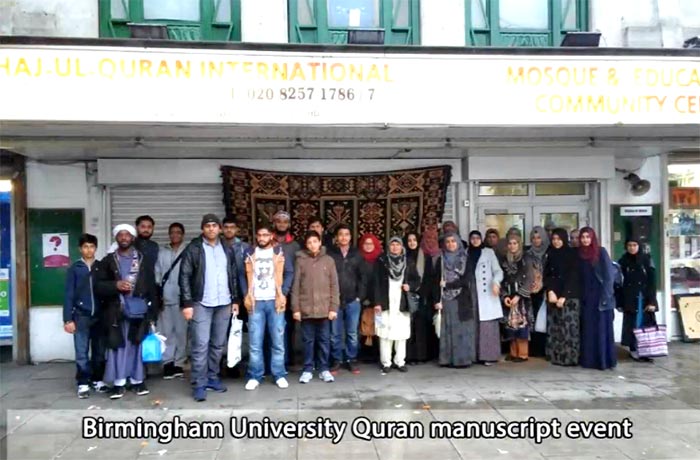