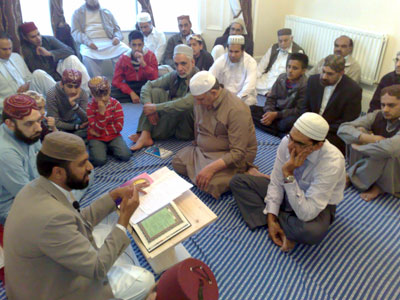 By the grace of Almighty Allah and his beloved Messenger (saw) Minhaj ul Quran International Glasgow successfully held their fourth session of Halq-e-Irfan-ul-Quran on Friday 13th of June in which there was an audience of over 60 people. Alhamdulillah their audience have been increasing in each session with more brothers and sister attending each week.

After learning about the importance of the understanding of the Holy Quran and the difference between other commentaries and the commentary of Hazoor Sayedi Shaykh ul Islam Dr. Muhammad Tahir ul Qadri, this session saw MQI Glasgow officially starting the interpretation and word for word understanding of the Holy Quran. Allama Shahid Babar led the audience in recitation of Surah Fatiha and asked them to repeat after him so they could get recitation correct. Before starting the interpretation and Tafsir of Surah Fatiha Allama Shahid Babar talked in great detail about the very first rule of reading Holy Quran and that was to recite Ta'auwuz at the beginning. He explained the word for word meaning of Ta’auwuz, why we recite it first, its significance, and also the meaning of Shaitan and the different types and forms of Shaitan which the Ta’auwuz is relating to. This was a very motivating, educational and incite full lecture which was very well prepared by Allama Shahid Babar and profoundly expressed. He was greatly appreciated by the audience. 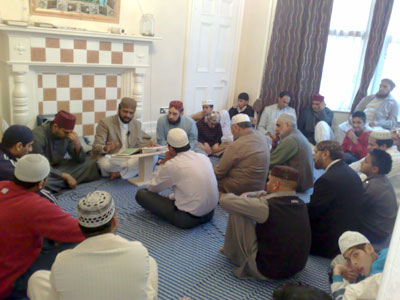 The fruits of this Halq-e-Irfan-ul-Quran were seen straight away as life memberships increased. Some of which were taken after the lecture had ended. In this particular session a member of the audience requested a membership form and became a life member Ma’shallah. Allama Shahid Babar and MQI Glasgow also received many compliments and congratulations from the audience and many of them have said that they will be inviting their friends and family to this weekly program Insh’allah.

MQI Glasgow believe that Irfan ul Quran, one of Hazoor Sayedi Shaykh ul Islam Dr. Muhammad Tahir ul Qadri’s immense works is the most effective way of introducing people to Minhaj ul Quran and its Mission. We would urge all centres to take this initiative and start Halq-e-Irfan-ul-Quran on a regular basis and help to promote MQI and the true teaching of Islam.