Dr Hassan Mohi-ud-Din held a meeting with the Chancellor, Vice Chancellor and the Head of Department Linguistics and Translation of The Jamia Al-Azhar. The meeting between the Chairman of the Supreme Council of MQI and the Chancellor of Jamia Al-Azhar Dr. Ibrahim Salah al-Sayed Sulaiman al Hudhud was held at the Al-Azhar University in Cairo, Egypt this afternoon. Dr. Hassan and the Chancellor exchanged views on contemporary and Islamic issues in detail followed by the CSC of MQI presenting the works of His Eminence Shaykh-ul-Islam Dr. Muhammad Tahir-ul-Qadri in the areas of Arabic, Hadith and Peace & Counter Terrorism. The efforts and scholarly works of His Eminence Shaykh-ul-Islam Dr. Muhammad Tahir-ul-Qadri were highly appreciated by the Al-Azhar. Dr. Hassan also updated the Chancellor of Jamia Al-Azhar with the current and upcoming intellectual work in various areas. Dr. Qamar Al-Azhari and Raja Iftikhar Hussain were also part of the delegation accompanying Dr. Hassan Qadri in today’s meeting. 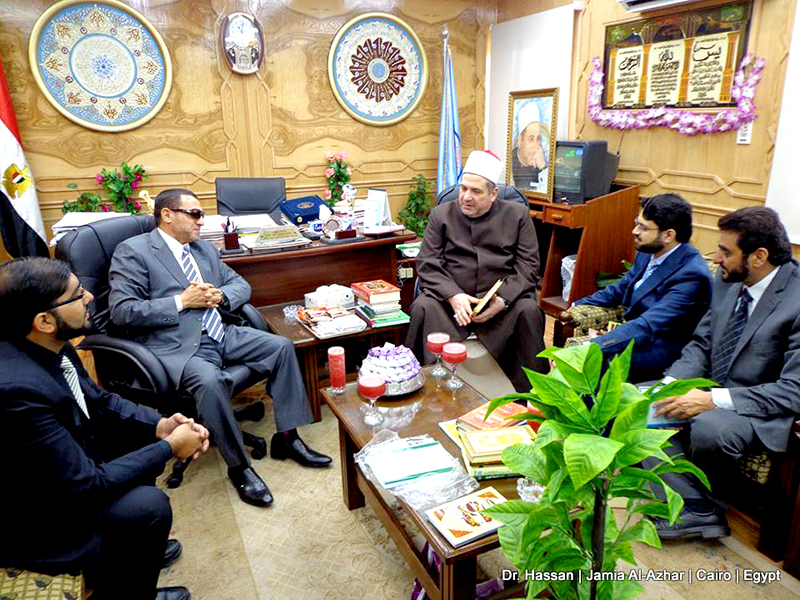