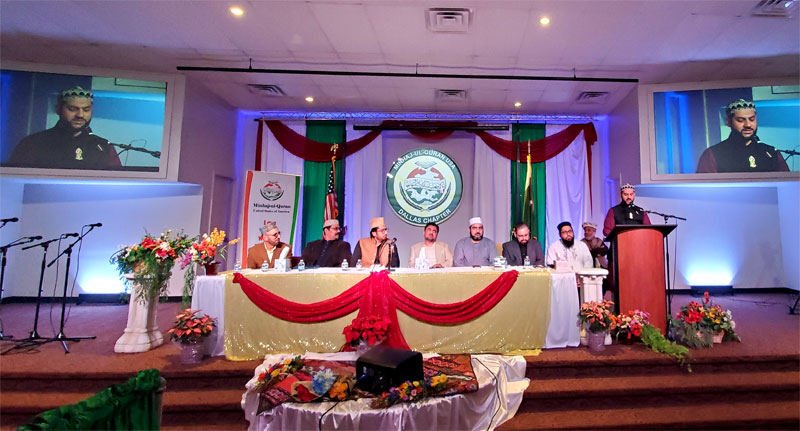 In the history of Islam, Ghaus-al-Azam Shaykh Abd al-Qadir al-Jilani (RA) stands out as being unique in the broader scope of spiritual perfection. Perfection includes his knowledge, devotion, and adherence to Almighty Allah.

Minhaj-ul-Quran Community Center Dallas was pleased to organize the grand Giyarween Shareef Program in the love and remembrance of Ghaus al-Azam Shaykh Abdul Qadir Jilani (RA) on Saturday, December 7, 2019, with religious fervor and zeal. There were two MCs of the program, including Minhaj Youth League brother Mobeen Mian and Zohair Akhtar, who conducted the program well. The program commenced with the recitation of the Quran in the beautiful voice of Imam of Jame’ Hasan al-Basri Minhaj-ul-Quran Center, Yusuf Al-Agami followed by translation by young brother Abdullah. Next was Hamd recited by brother Imtiaz Jan. Brother Shoaib Khan recited Salam in Arabic, followed by Manqabat by Malik Akram Saheb.

Sunday school students Sister Arshnoor and Dua read Hasbi Rabbi Jallalah in a melodious voice and caught the attention of the audience. Dr. Farooqi was the speaker of the program. Dr. Farooqi emphasized the life of Ghaus al-Azam Shaykh Abd al-Qadir al-Jilani (RA) including his early life, where he was schooled, his background, and why he’s a significant personality in Islamic history. How he became a leader of the spiritual way and how he taught us to cleanse and purify ourselves.

Furthermore, Dr. Farooqi explained the foundational characteristics like piety, truthfulness, and knowledge and link to the Holy Prophet ﷺ is what made Ghaus-al-Azam Shaykh Abd al-Qadir al-Jilani (RA) who he is and why’s he is so significant in Islam and why everyone knows Ghaus-ul-Azam Shaykh Abd al-Qadir al-Jilani (RA) . After the speech, a very unique and eloquent expression of poetic praises, hymns, and elegies in honor of the Holy Prophet ﷺ, Sayyiduna Maula Ali (RA) and Ghaus al-Azam Shaykh Abdul Qadir Jilani (RA) was presented by Sahibzada Tasleem Ahmad Sabri who was the special guest of this blessed gathering. Sahibzada Tasleem Ahmed Sabri is a well-known Pakistani Television host since 2004 of Islamic Television Channel ARY who came from Pakistan to the US to enlighten people’s hearts with the love of the Holy Prophet and Awliya Karam.

Sahibzada Tasleem Ahmed Sabri is blessed with a great voice by Almighty Allah, which engaged all the audience in a very spiritual way. The audience loved his exclusive style of expression of love. This blessed program eventually concluded with Salam by all the local naat reciters and dua by Imam Yusuf Al-Agami. Free Cds on the Irfan-ul-Quran translation by Shaykh-ul-Islam Dr. Muhammad Tahir-ul-Qadri was distributed among the audience. All the audience were provided with boxed dinner. 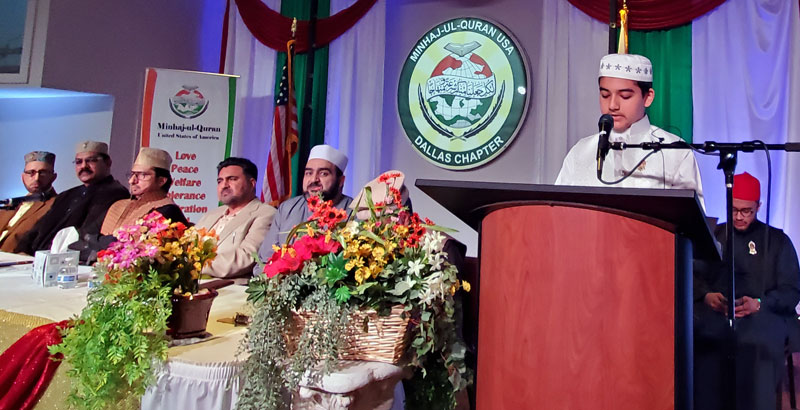 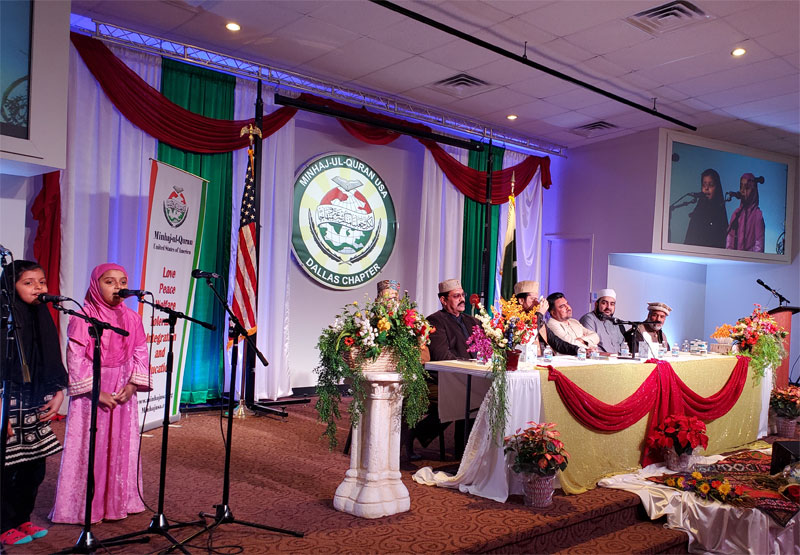 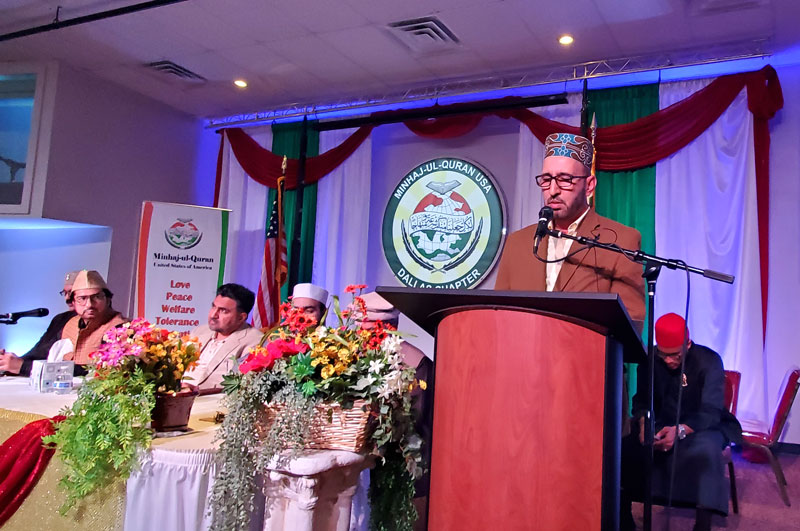 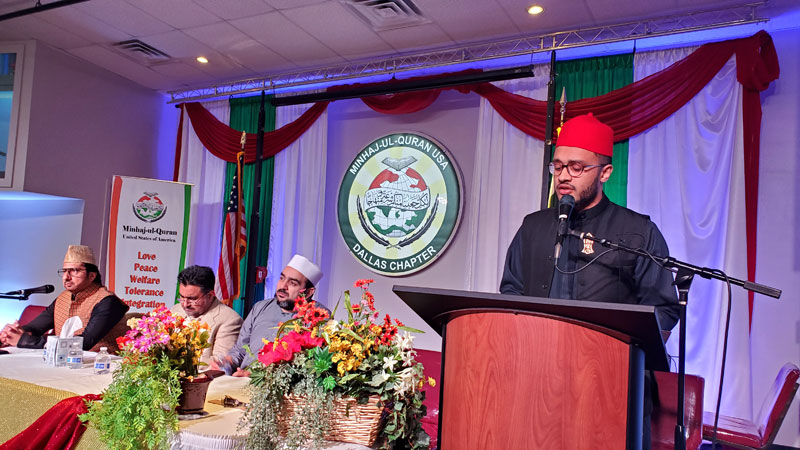 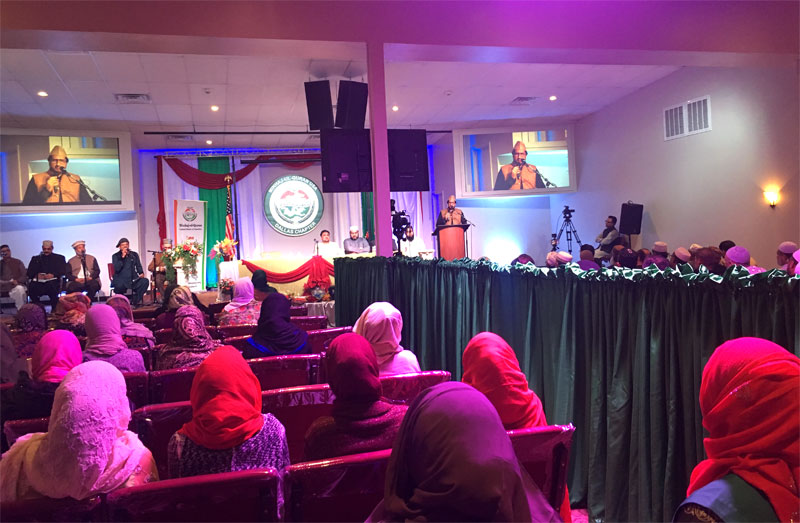 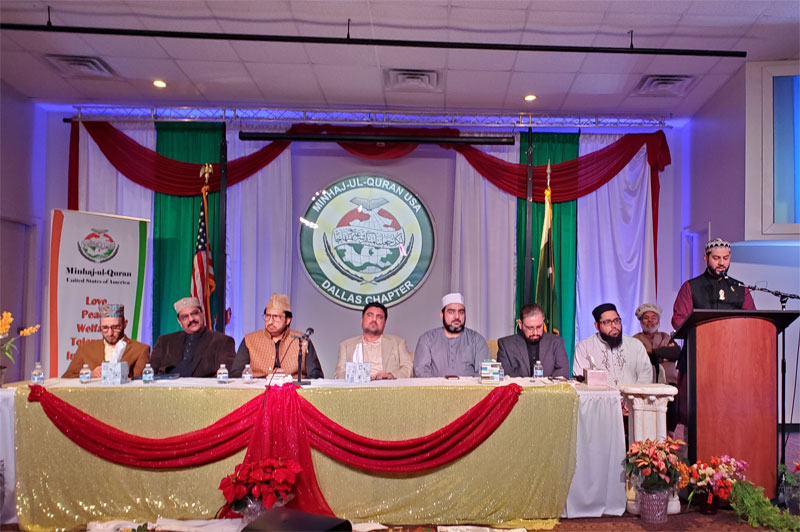 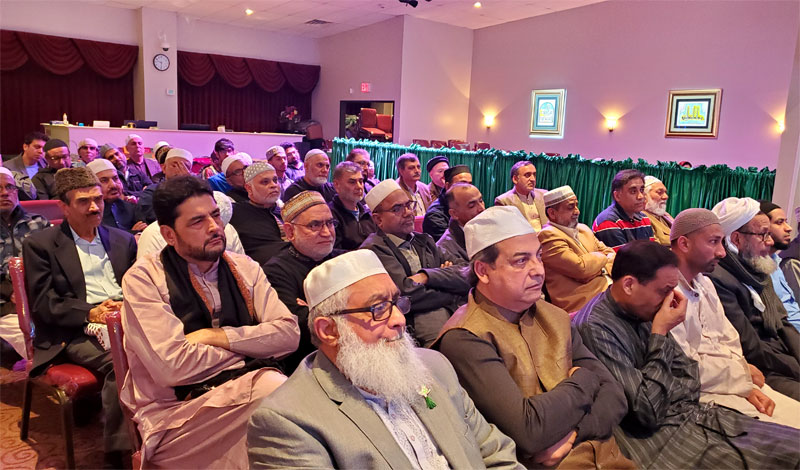 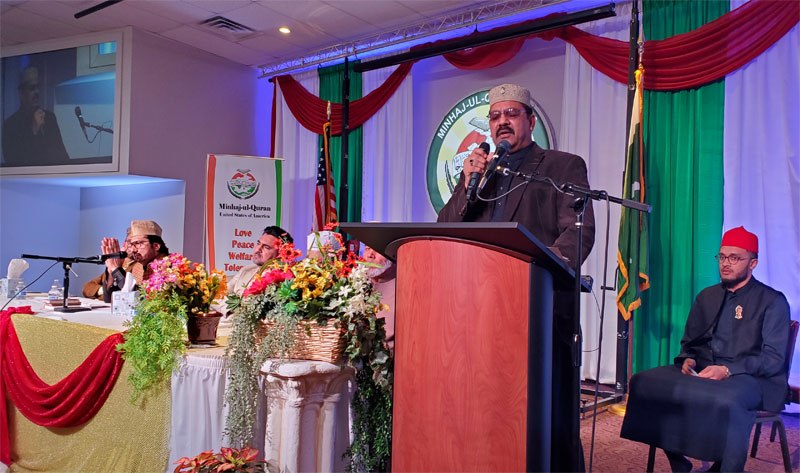 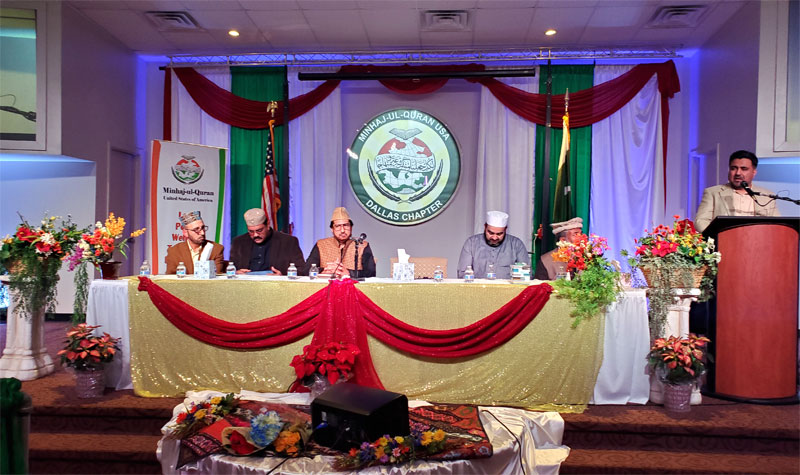 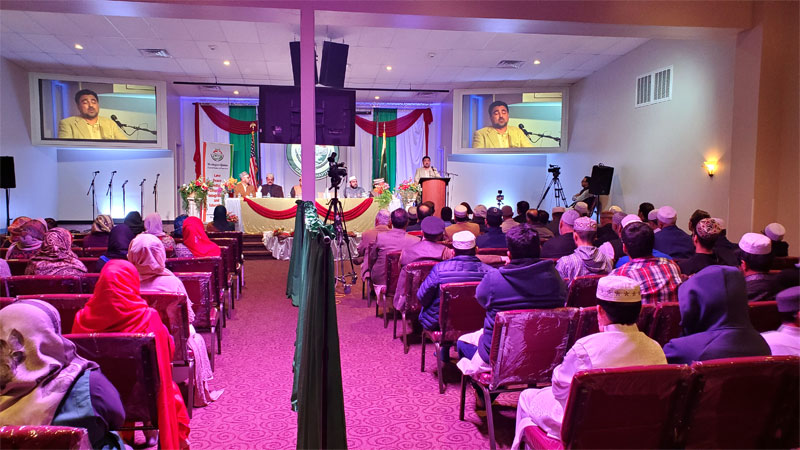 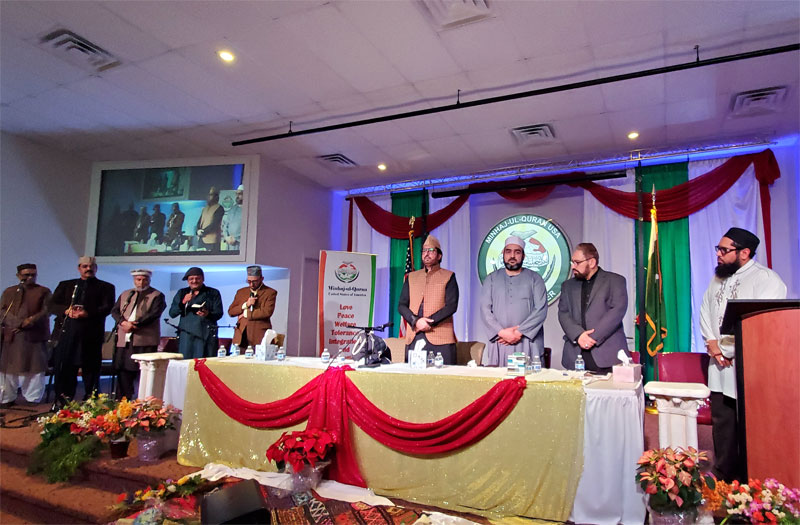 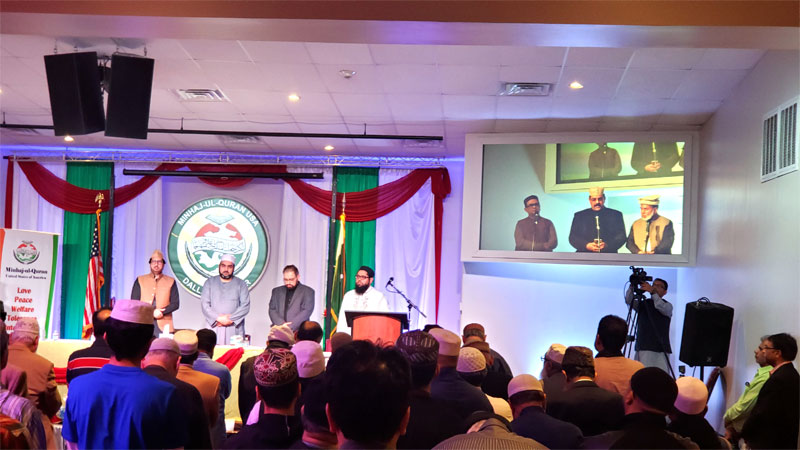 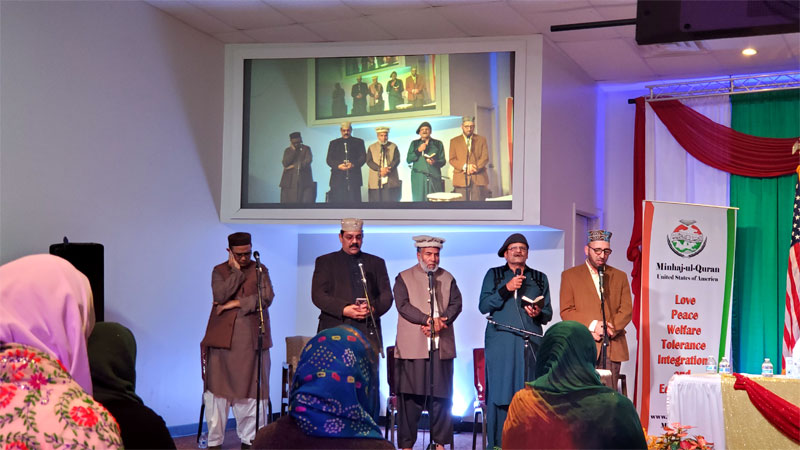 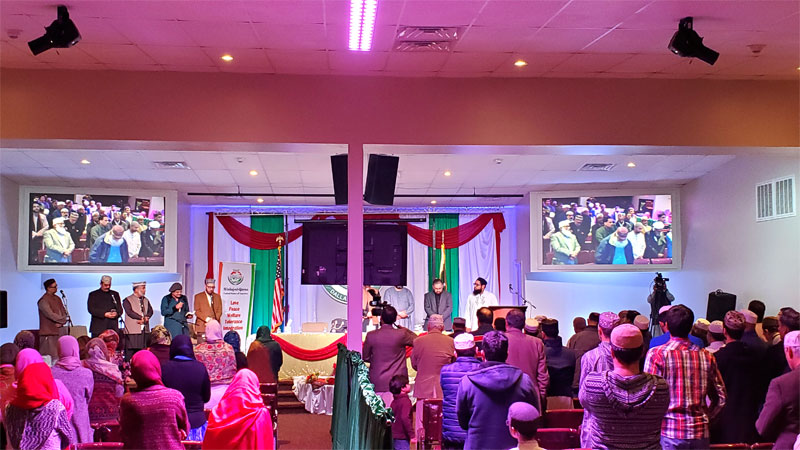 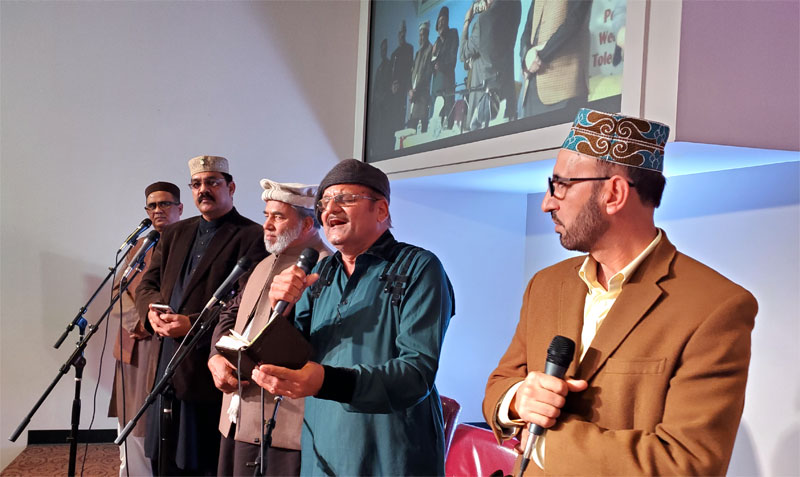 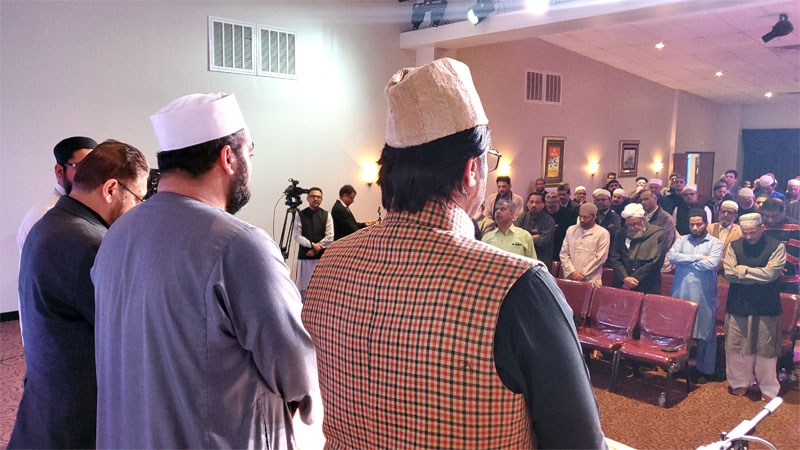 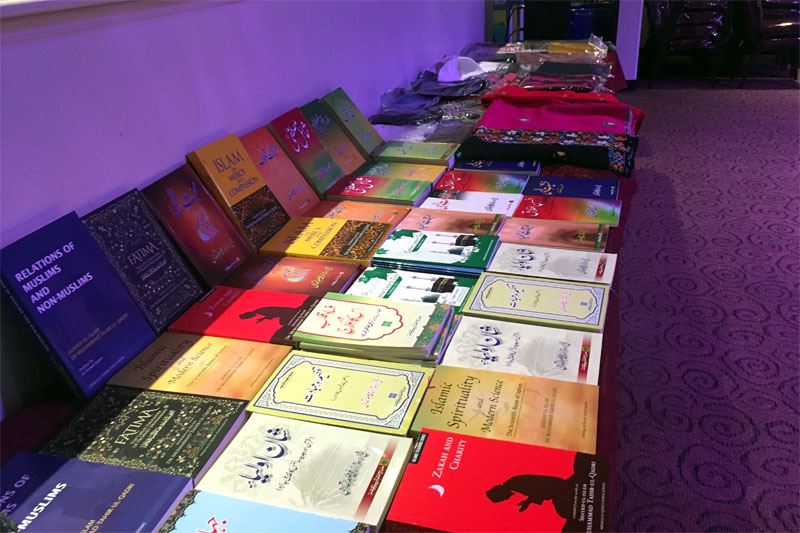