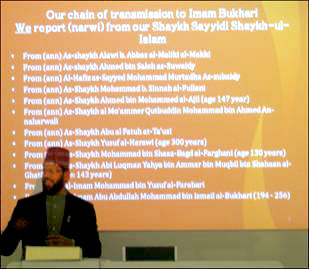 The Pride of Bukhari: a lecture on Shaykh-ul-Islam’s sanad up to Imam Bukhari and the Thulathiyat of Imam Bukhari.

On the third of December 2008, Shaykh Muhammad Ramadan al-Qadri, principal of Farghana institute, visited the Netherlands on the invitation of MYL NL (Minhaj Youth League Netherlands/Holland). On the first day of his visit he delivered the concluding lecture of the ‘Sahih Bukhari Lecture Series’ which were organized by MYL Holland (under the banner of Al Hidayah) at the Erasmus University Rotterdam.

These lecture series were a continuation of the ‘Introduction to Sahih Bukhari’ which had already been concluded in may 2008. The set-up of these series is like regular courses at universities, with official enrollment and study material. This was the very first time that a thorough study of Sahih Bukhari in the Dutch language was undertaken. The lectures were delivered by Tasneem Sadiq, who is a student in the Islamic sciences. Up till now a total of 25 hours of lectures has been devoted to the study of Sahih Bukhari, which is a landmark achievement in the history of Islam in Holland. The students were Muslims from different cultural backgrounds (Moroccans, Pakistani, Turkish , Suriname, Indian, Dutch, Spanish, etc.)

The Pride of Bukhari

Shaykh Ramadan al-Qadri spoke on the topic of ‘The Pride of Bukhari’. He started with a thorough discussion of the narrators mentioned in the shortest chain of narration of sayyidi Shaykh-ul-Islam up to Imam Bukhari. He gave a short biography of each narrator mentioning his most precious works and deeds. He specifically mentioned Shaykh Murtaza al-Zubaidi and his contribution to the revival of riwayah al-Hadith. Shaykh al-Zubaidi instructed for example his secretary to note down the names of all the people present in his lectures and give them written ijazahs. Shaykh Ramadan mentioned that after two hundred years, sayyidi Shaykh-ul-Islam Dr. Tahir-ul-Qadri has once again revived the spirit of riwayah and dirayah through public lectures, dawrahs and publications.

During the second half of his lecture, Shaykh Ramadan al-Qadri discussed the ahadith from Sahih Bukhari which are called the Thulathiyaat. These are 22 ahadith which consist of only three narrators between Imam Bukhari and the Prophet Muhammad (saw). All other ahadith in Sahih Bukhari (totaling around 7.000) have more than three links. These 22 ahadith are considered as the Pride of Bukhari because of their short linkage between him and Rasulullah (saw).

Discussing one of the Ahadith, Shaykh Ramzan al-Qadri stated categorically that the religion which forbids cutting down trees and killing civilians during warfare can never sanction the killings like we see nowadays in the various parts of the world.

At the end of the lecture, answering one of the questions from the public, Shaykh Ramadan mentioned that the root problem of religious extremism is that every group thinks that his extremist interpretation is the correct one and all other opinions (even though their evidences might be stronger) are not correct. If you express your religion by keeping in mind that there are several opinions, each with their own evidences, and you follow one opinion without declaring other opinions as non-Islamic, there will be far less extremism than seen today. 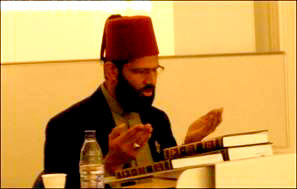 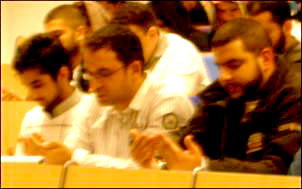 The participants appreciated Shaykh Ramadan very much. After the lecture, the participants were offered the possibility to register for the next lecture series in January and February 2009. They were also offered an English DVD of Shaykh-ul-Islam on the topic of Human Rights in Islam, which was delivered last August in Manchester.