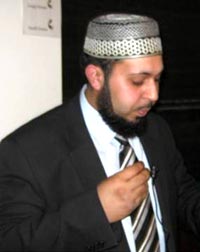 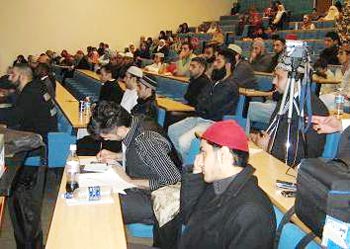 The youth of Farghana Institute successfully hosted celebrations on the birth of the beloved Prophet (saw) in the form of a ‘Mawlid Festival’ in collaboration with Muslim Youth League UK. The event took place at the University of Manchester on Sunday 22nd March 2009 under the guidance of the principal of Farghana Institute, Shaykh Muhammad Ramadan Al-Qadri.

Distinguished guests included were Shaykh Saad Al Attas, (a descendant of the Prophet (saw) who currently teaches Abu Zahra Foundation and is part of an organisation that is working positively for society, Clement’s Gate) Shaykh Zain-ul-Aqtab Siddiqi (Currently teaching at Hijaz College and Suyuti Institute who is the third of the four sons of late Munazir-e-Islam Peer Abdul Wahhab Siddiqi, a unique and dynamic scholar and lecturer of the deen as well as an established solicitor of the Supreme Court) and guest Munshideen were Qadri Boudshishi brothers from Birmingham. 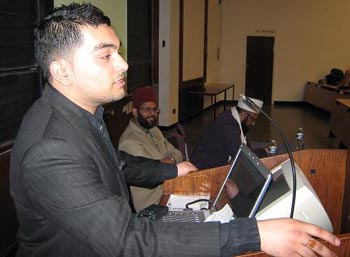 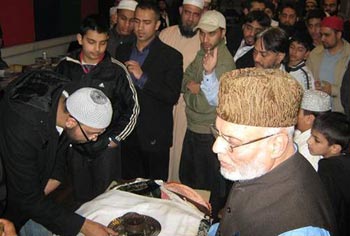 Soon after that the second stage of the proceedings were conducted by Zain Shabbir another student of Farghana Institute who welcomed a short and beautiful talk by a young student of Farghana Institute, Wajid Ali, on the description of the Prophet (saw). Shaykh Saad Al Attas soon took to the stage addressing the audience on the nature of the Prophet (saw) and how his blessed sunnah is universal and natural, as well as the Deen of Islam and its overall importance in our time.

After that there were nasheeds recited by sisters and there was a talk by Sister Tayab Ali Qadri. This followed recital of poetry by Farghana Institutes very own poets, brothers Zaigham Khan and Dawood Qadri. 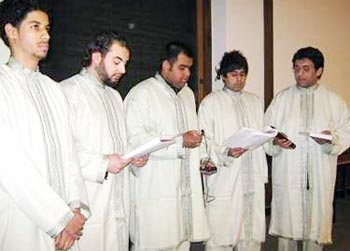 That followed with a talk by a Farghana Institute student from Holland, Muhammad Azeem Mirza Al Qadri. Whilst amusing the audience, Azeem spoke about a website that was launched especially two hours before the Mawlid Festival began, MuslimsInEngland.com, and encouraged the audience to visit and take on a role with the website.

After that the awaited Munshids, the Qadri Boudshishi brothers took to the stage and enlightened the audience with very moving salawaat and nasheeds in their unique Moroccan style.

Soon after, Ayub Anwar a student of Farghana Institute took to the stage to introduce the final speaker Shaykh Zain-ul-Aqtab Siddiqi. He mentioned the words of Shaykh ul Islam Dr Muhammad Tahir ul Qadri in regards to the grandfather of Shaykh Zain-ul-Aqtab, his eminence Munazir-e-Azam Muhammad Umar Icharvi (ra), most notably that he was the proof of the true Aqeedah of Islam in his time. 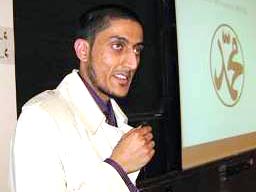 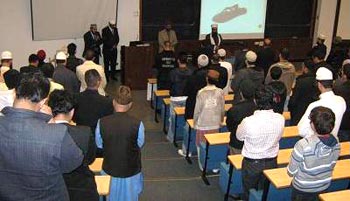 Shaykh Zain-ul-Qatab Siddiqi delivered a very entertaining, powerful and thought provoking lecture about the concept of ‘birth,’ how we celebrate the birth of the Prophet (saw) under this concept when it is only used for those who are alive. He gave various proofs from the Qur’an and Hadith on how the Prophet (SAW) is the greatest of creation and how we aught to understand and celebrate the Milaad of the Prophet (saw) in its proper sense.

The speech was followed by concluding remarks by Shaykh Muhammad Ramadan Al-Qadri, Salaam on the Prophet (saw) by Muhammad Ramzan Al-Azhari and concluding du’a by Shaykh Zain-ul-Aqtab Siddiqi. 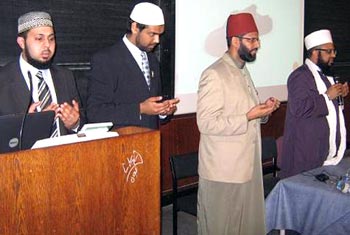 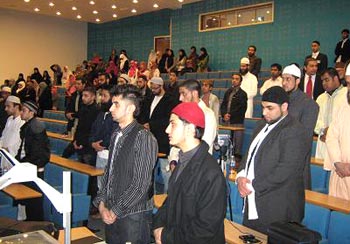