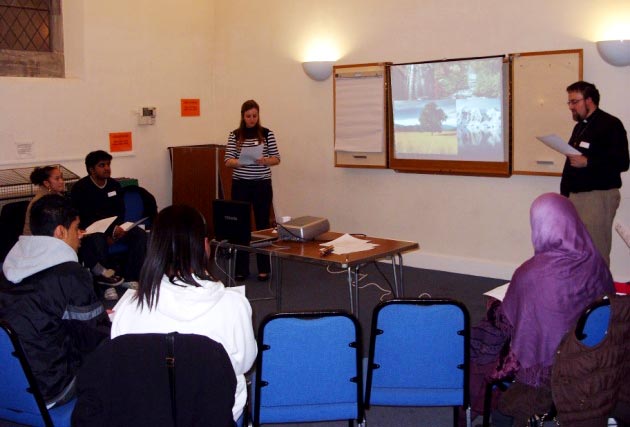 The first visit of this project was to Minhaj-ul-Qur’an International London itself. At St Johns Church, some photos were displayed using a projector screen with the attendees being asked how important they were to them in their daily lives and whether they held any religious importance. There were photos of money, celebrities, buildings and other items. Everyone found it surprising that most of the faith groups shared the same types of views on certain photos such as giving importance to helping the elderly, caring for the sick and helping the poor. The majority agreed that items such as wealth, celebrities and brand labels were not very important in the life of a faithful person. However, some pointed out that wealth, celebrities and brand labels can often be used to act as role models for society and hence play an important role in the life of a person of faith. At the end, photos with symbols and places of worship belonging to different faith groups were displayed and the participants were asked to identify them. Everyone learnt a lot through this. 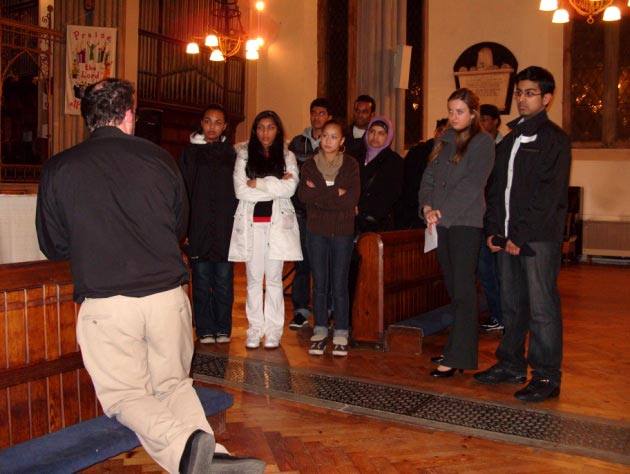 The attendees were divided into small groups to discuss the photos
between themselves before sharing their thoughts with everyone else.
You see her brother Muneeb of the Muslim Youth League discussing
an image with Christian and Hindu youth in his team.

This was followed by a tour of the Church. Non-Christians learnt that there were actually different kinds of Crosses used in Christianity. The Catholic faith always has a model of Jesus (peace be upon him) on it whilst the Church of England prohibits it. Many of the Christians present were also unaware that Muslims too believed in Jesus. They also learnt that Muslims have a lot of stories surrounding the blessed Mary and the birth of Jesus (Isa (`alayhis-salam)) and were astonished to learn of a chapter being named after her in the Holy Qur’an: Chapter Maryam (Mary). 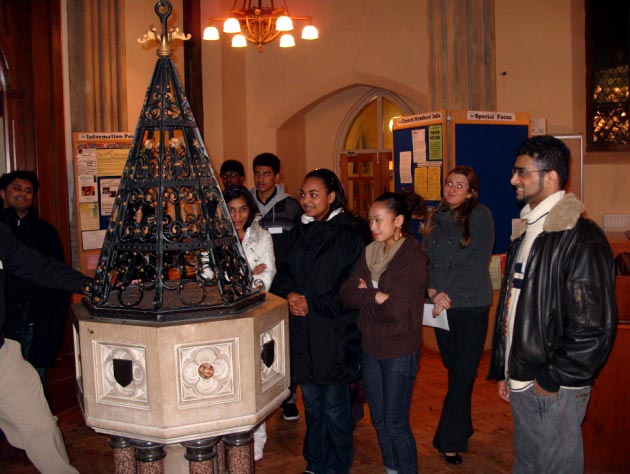 Brother Usman Shah of MYL and sister Nasra of the Women League
are seen here in the same team as Rev Darren and a Catholic girl.

Reverend Darren, a young priest at the Church who led the tour gave some historic information regarding it. This was followed by a light discussion about how much religion plays a part in the life of the attendees. Reverend Darren explained that all of his life should be governed by Bible. It was also pointed out that although Sister Nasra is not a priest, wearing a scarf could be said to be a sign of practicing her religion in all walks of her life. Rafiq mentioned that historically, many women in most faiths wore the scarf which is why pictures of the blessed Mary depict her with a veil. Brother Usman mentioned that he tries to attend the Mosque for all his 5 prayers thus stressing the link he has with the mosque. Although such prayers are not found in Christianity, some of the students from a local Catholic school pointed out that they attended Church almost daily. 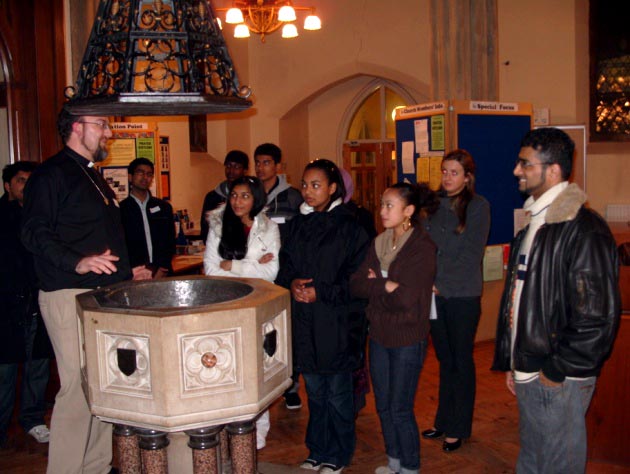