Historical Launching of Fatwa Against Terrorism

Shaykh-ul-Islam Dr Muhammad Tahir-ul-Qadri, the founding leader and patron-in-chief of Minhaj-ul-Quran International, has issued his detailed edict (Fatwa) against terrorism which consists of more than 600 pages. The launching ceremony of the Fatwa was held on March 2, 2010 in London (UK). Minhaj-ul-Quran International UK arranged a press conference which was heavily attended by representatives of the international media besides Labour party minister Shahid Malik, members of EU and UK parliaments Sajjad Karim, Muhammad Sarwar, James Finter, ambassadors of Iraq, Germany and other countries, officials of the Home Office, Commonwealth Office and Metropolitan Police, Professors and Muslim and Christian community leaders.

Shaykh-ul-Islam Dr Muhammad Tahir-ul-Qadri presented the anti-terror Fatwa in Urdu and English languages before the international media. It should be kept in mind that Shaykh-ul-Islam had declared to issue a detailed Fatwa against terrorism and suicide bombings in December 2009, which was originally thought to consist of 300 pages, whose volume later on increased to 600 pages due to scholarly dealing of the subject. This Fatwa is the only one of its kind in terms of its intellectual value, penetrating research and authentic allusions. Hence, it is a scholarly and historic document. 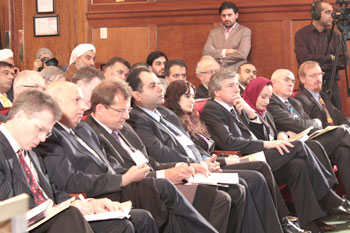 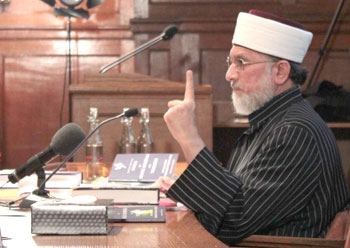 Talking to the international media on the occasion, Shaykh-ul-Islam Dr Muhammad Tahir-ul-Qadri said that ever increasing wave of extremism and terrorism has destroyed the world peace. It is a matter of great misfortune that these terrorist activities of the misguided elements have been bracketed with Islam though the reality is otherwise. He said that majority of the religious scholars condemn terrorism but the condemnation is merely rhetorical. No one has come forward with an authentic and intellectual response to terrorism in the form of a patent decree. Minhaj-ul-Quran International has told the world in no uncertain terms through issuance of this Fatwa that terrorists have nothing to do with Islam. It is a peaceful religion, which not only condemns but also prohibits every kind of terrorism at every level under any pretext.

He said that the suicide bombers are out of the pale of Islam. He hoped that the youth would not become the fodder for the cannons of terrorist elements or extremist organizations after studying the Fatwa.

The terrorist elements brainwash the youth by invoking wrong interpretations of the faith. The youth who advance the objectives of the terrorists should regard themselves out of the fold of Islam in accordance with the teachings of the Holy Prophet (saw). He said that terrorism is terrorism and it cannot be justified under any pretext through allusion to any real or alleged instances of injustice and there is no space for terrorism in Islam. 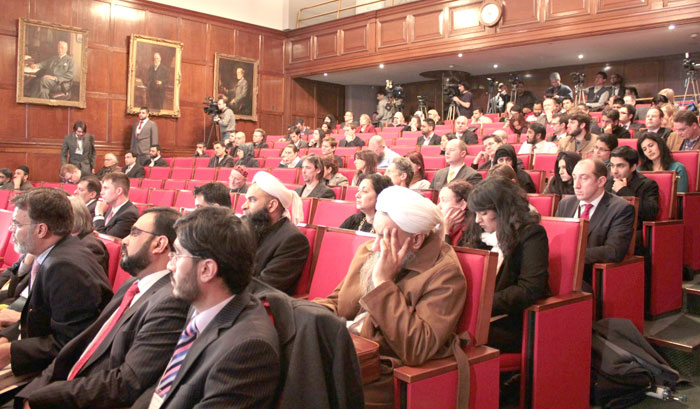 He regretted the fact that the Islamic teachings, which are based on love, peace and welfare, are being manipulated and quoted out of contexts to serve the designs of the vested interests. He said that Islam spelled out a clear code of conduct during the course of war and gave complete protection to the non-combatants including women, the old, and children etc., so much so that trading centres, schools, hospitals and worship places were also declared as safe.

Shaykh-ul-Islam Dr Muhammad Tahir-ul-Qadri said that those who want to impose the Islamic order on others by means of force and naked power belong to the group of Khawarij who, during the Caliphate of Hazrat Ali (ra), took up arms and initiated rebellion against the Islamic state in the name of enforcing the Divine Order. The terrorists of today also belong to the same breed of Khawarij. They resemble one another in their appearances, body demeanors and even working. He said that Islam does not approve of the killing of innocent people under any excuse. There is a judicial system to indict the wrong-doers and bring them to book. It is the responsibility of the Islamic state to implement the system of justice and punishment through state-run mechanism and none can be allowed to take law in his hands. 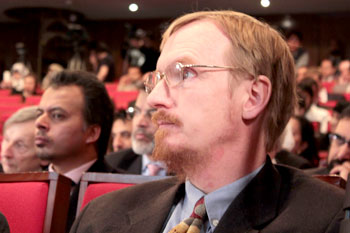 He vehemently condemned those who perpetrate terrorism in the name of religion and branded them as the greatest enemies of Islam. He said that if at all these people have to wage Jihad, they could do so against ignorance, corruption, dearness, poverty and other social evils. He also blasted the opponents of democracy and said that the Holy Prophet (saw) is the champion of the democratic and consultative system. Shaykh-ul-Islam reminded the Islamic governments of the fact that it is their national and religious duty to eliminate terrorism and terrorist networks from their midst. They should continue the military action till the complete elimination of these groups.

In reply to a question, he said that the Islamic governments should allow democracy to flourish and strengthen political system and processes. If the enemies of Islam and Khawarij are totally annihilated, the roots of terrorism would stand dismantled. He deplored that the Muslim youth happened to be the first casualty of terrorism, for they got trapped in the hands of the terrorist for the sake of religion. The major advantage of the Fatwa would be that the youth would be able to know the reality of their actions whether they are choosing the path to hell or heaven.

British cabinet minister, Shahid Malik, paid glowing tribute to Shaykh-ul-Islam Dr Muhammad Tahir-ul-Qadri and said that he has always projected the real teachings of Islam. His Fatwa would have long-term positive and revolutionary impact on the Muslim community living in UK and elsewhere and would transform mindsets. He assured his full cooperation at the governmental level. 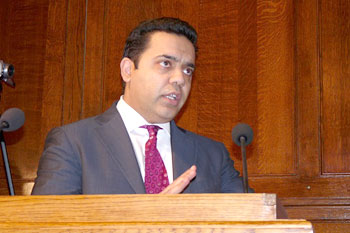 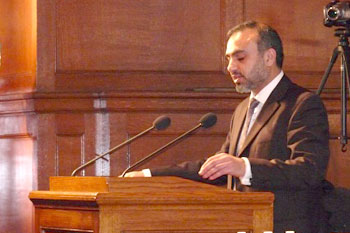 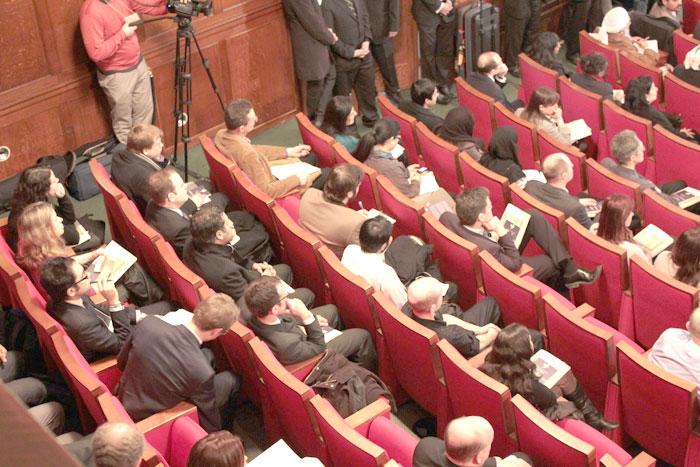 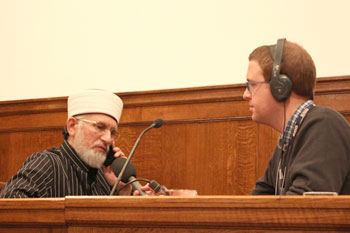 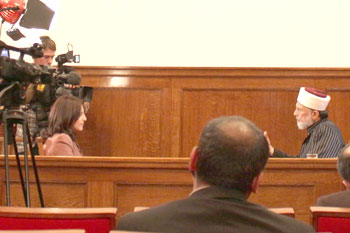 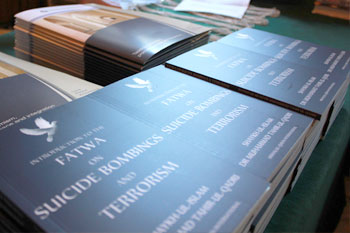 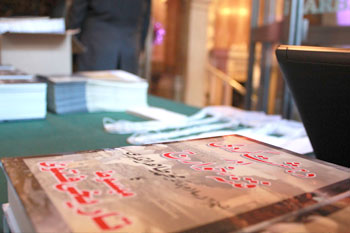 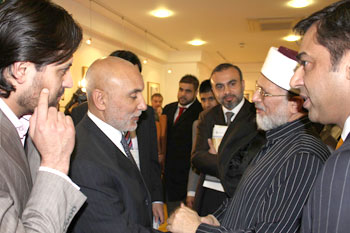 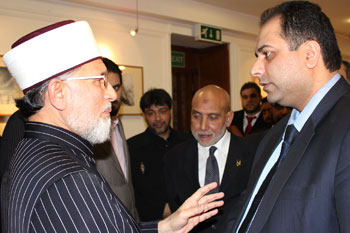 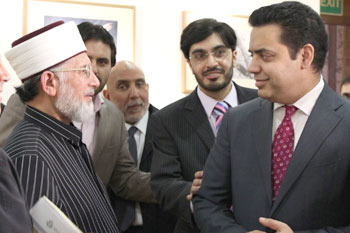 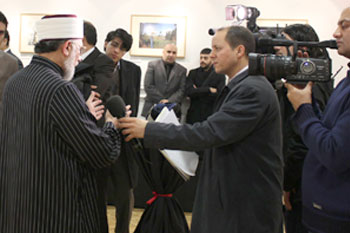