At the U.S.-Islamic World Forum in Washington D.C., which was jointly organized by the Brookings Institution, the Qatar Government and the OIC, Shaykh-ul-Islam Dr Muhammad Tahir-ul-Qadri met with the Secretary General of the Organisation of Islamic Conference (OIC), Prof Ekmeleddin Ihsanoglu. They spoke about various issues of mutual interest and exchanged views on a host of issues. 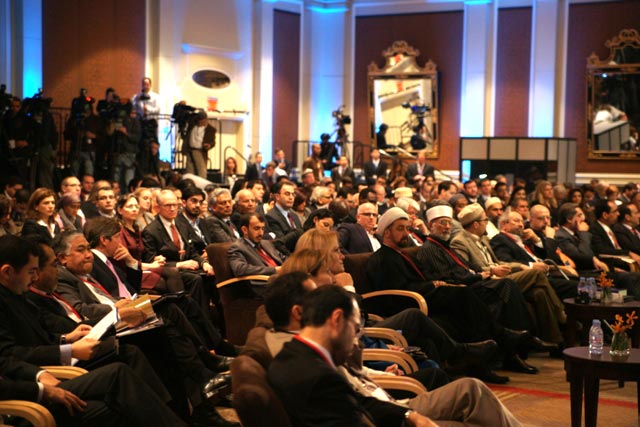 View of the participants and speakers of the U.S.-Islamic World Forum 2011

The discussion focused on the recently authored Fatwa on Terrorism and Suicide Bombings and ways of combating terrorism in the Muslim world. Prof Ihsanoglu highly appreciated the scholarly work and was impressed by the quality of content. He said that he is looking forward to reading the complete book. The OIC Director General Ambassador Hemayet Uddin was also present in the meeting. Both leaders were very pleased to meet Shaykh-ul-Islam. Mr Hasan Mohi-ud-Din Qadri was also present.

Shaykh-ul-Islam also met with the Foreign Minister of Qatar, Ahmad Bin Abdullah Al-Mahmoud and presented him a copy of the Fatwa on Terrorism and Suicide Bombings who highly appreciated the great work. Senior Advisor to the Turkish Prime Minister, Prof Ibrahim Kalin also met Dr Qadri who was fully aware of his book against terrorism and was highly appreciative of the magnum opus on the subject of terrorism.

U.S. President Obama’s Special Envoy to the OIC, Mr Rashad Hussain also called on Shaykh-ul-Islam Dr Muhammad Tahir-ul-Qadri during the conference and spoke about the historic Fatwa on Terrorism and Suicide Bombings. He said that they have received this book at the Whitehouse and were well aware of this great work. Mr Hussain discussed issues of mutual interest with Shaykh-ul-Islam. Mr Hasan Mohi-ud-Din Qadri and Shahid Mursaleen were also present in the meetings.

The Vice President of Brookings Institution, Dr Martin Indyk, was pleased to meet Shaykh-ul-Islam Dr Muhammad Tahir-ul-Qadri who spoke highly of the great work condemning terrorism. A signed copy of his Fatwa book was presented to Mr Indyk. Mr Stephen Grand and other senior think-tank representatives also held a meeting with Dr Qadri and exchanged view of mutual interest.

In addition to that, various government officials, think tank representatives, policy makers, politicians met Dr Tahir-ul-Qadri during the course of the 3-day conference.

Dr Qadri attended five different closed-door sessions and spoke on issues including the treatment of minorities, integration and identity, the impact of media and politics and security and counter-terrorism. The fourth session focused on the discussion around the historic fatwa on terrorism by Shaykh-ul-Islam Dr Muhammad Tahir-ul-Qadri.

These sessions will help form future policy vis-à-vis terrorism and would offer recommendations to the think-tanks and the Government officials on handling various problems faced by the western and Islamic world.

Dr Qadri’s participation at the 3-day U.S.-World Islamic Forum was highly successful, which will help tackle terrorism from an ideological and intellectual perspective and also tackle anti-Islam views. Dr Qadri presented various core arguments on how to grapple with issues of minority rights, clarified issues of blasphemy laws and presented solutions to take on Islamophobia. He also presented ways of promoting integration in the west.

At the gala dinner Shahid Mursaleen (spokesman of Minhaj-ul-Quran) who was present at the conference met with Secretary of State Hilary Clinton and presented a copy of the book Fatwa on Terrorism and Suicide Bombings to her. He briefed Secretary Clinton about the key features of the book and that it is the most comprehensive condemnation of terrorism to date from any Muslim leader. He said that this book will help in the fight against global terrorism. She highly appreciated the work and promised to read it.

The event was attended by around 300 participants from around 30 countries. Shahid Mursaleen, Dr Mansoor Mian and Sharjeel Ahsan attended the conference from MQI’s side in addition to Shaykh-ul-Islam and Sahibzada Hassan Mohi-ud-Din Qadri.