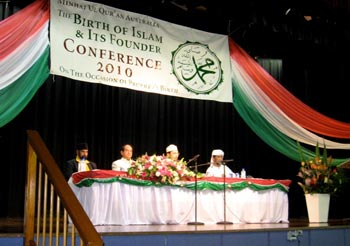 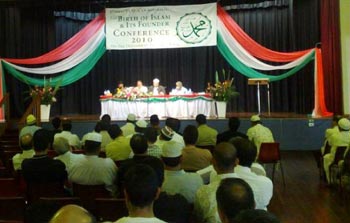 Hundreds of Muslims visited the Bowman Hall Blacktown, Sydney, Australia on Sunday, 14th of March 2010, for a prestigious celebration conference to mark the birth anniversary of the Prophet Muhammad (blessings and peace be upon him). The Birthday is celebrated by millions of Muslims around the world via recitation of Naat and programs of Mawlid-un-Nabi (blessings and peace be upon him). The day is a national holiday in many countries including Syria, Libya, Egypt, Morocco and Pakistan among others and is traditionally referred to as Mawlid al-Nabi. 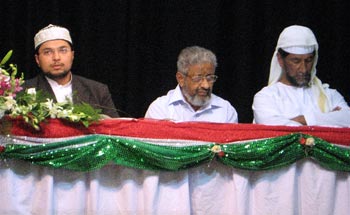 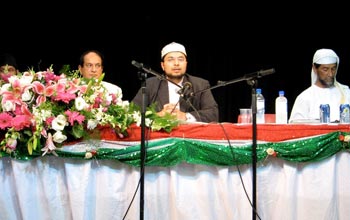 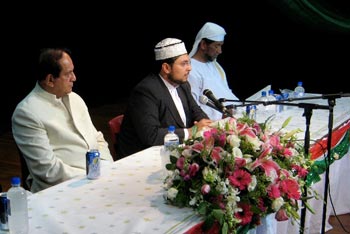 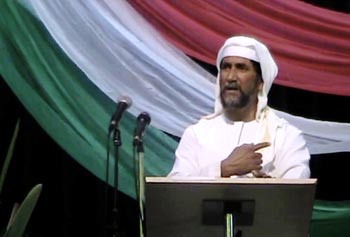 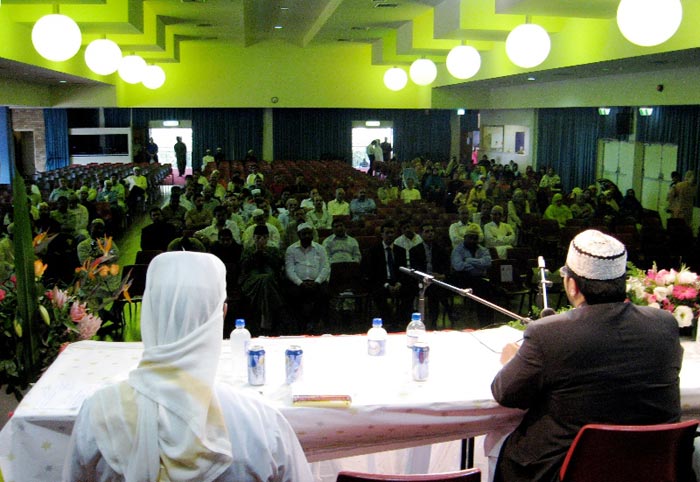 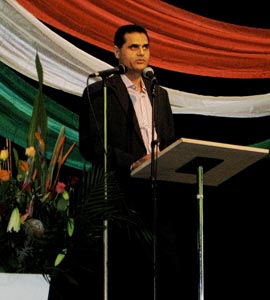 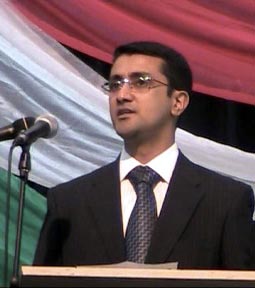 Sahibzada Hussain Qadri also announced the educational visit of His Eminence Shaykh-ul-Islam Dr. Muhammad Tahir-ul-Qadri to Australia in June 2010 when he will be delivering several lectures including main talk at the Town Hall, Sydney. He invited the audience to attend those lectures and asked them to be prepared to welcome one of the most influential ambassadors of peace and Islam in the world today. 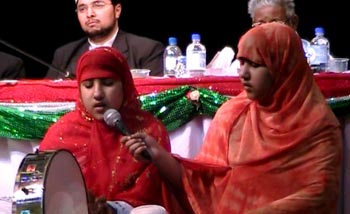 He finally, concluded his speech by congratulating the management of Minhaj-ul-Quran Australia “to hold such a beautiful gathering on the occasion of Mawlid-un-Nabi (SAW)” and prayed that “may this celebration be accepted in the court of the Prophet (SAW).” He traveled from Melbourne and arrived in Sydney the day before the conference. Minhaj-ul-Quran Australia’s executive committee members received him at the Sydney Airport. 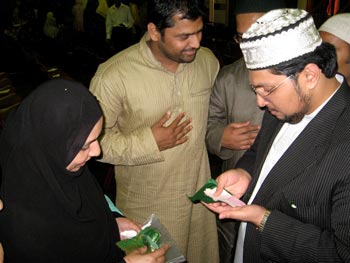 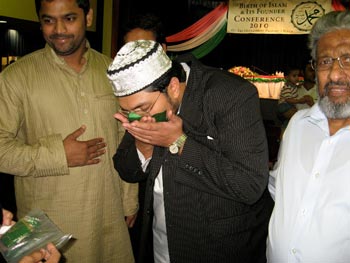 Sahibzada Hussain Mohi-ud-Din Qadri is the son of the foremost authority of Islam, Shaykh-ul-Islam Dr. Muhmmad Tahir-ul-Qadri – founder and patron-in-chief of the Minhaj-ul-Quran International, the world’s largest non-governmental organisation. Before his address, Ruhel Dalvi, member executive committee and Finance Secretary introduced him and Dr. Shams-ul-Arifeen, Vice President of MQI Australia presented an exclusive introduction to Shaykh-ul-Islam Dr. Tahir-ul-Qadri and the Minhaj-ul-Quran International and their achievements and services for the education, peace and betterment of humanity. He also introduced few books written by Shaykh-ul-Islam to the audience including Irfan-ul-Quran (the most comprehensive and modern translation of Quran) and Minhaj-us-Sawi (the book of Ahadees), which were also available for sale on the book stall set up on the occasion. 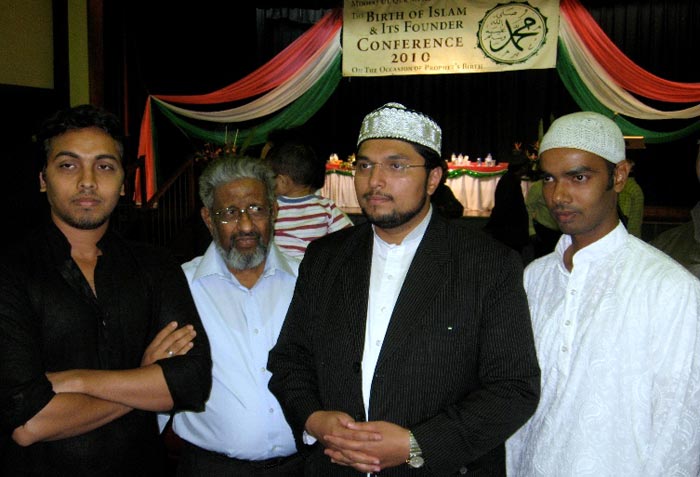 Among other prominent guests were included Haji Aziz Akbar, President of Australia Forum and Haji Abdul Hakeem, President Muslim Society of Western Sydney, who were received by Haji Mohammed Janiff, the President of Minhaj-ul-Quran Australia. The conference started with Tilawat-e-Quran by Haji Nouhad who recited Sura Wadduha. There were a lot of Naats and Duroods presented on the Holy Prophet (SAW) during the conference by several local Naat reciters including Tazeem Ali Qadri, Ahmaddin Shahzad Muhaddidi, and Riaz Shah. Two sisters Sara and Taiba recited “Tala ul badro alaina” on Duff, which completely transformed the environment and people started reciting it as well along with both the sisters. 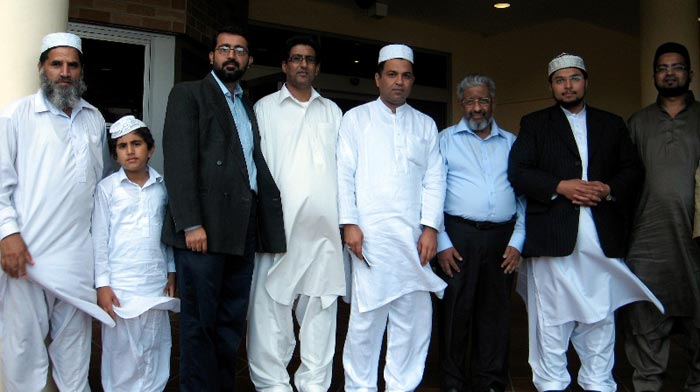 The people who came from different parts of Australia including Sydney, Melbourne, Brisbane and others to attend the conference, expressed their happiness and delight to be part of this celebration event. Most of them had already attended last years Milad conference but there were many others who attended Minhaj-ul-Quran’s Milad Conference for the first time and were very happy and astonished too by the “mind blowing” speech of Sahibzada Hussain Mohi-ud-din Qadri, as one of the participant described it. Also like last year, many people who understand and love the message of Minhaj-ul-Qur’an International and respect Shaykh-ul-Islam Dr Muhmmad Tahir-ul-Qadri and his services but have never met him in person, were very excited to see his son Sahibzada Hussain Mohi-ud-Din Qadri in Sydney and prayed for him as well as for Dr. Qadri.

After the final Salat-o-Salam and Du’a by the chief guest at the conclusion of the conference, when he was leaving the Bowman Hall for Sydney Airport, one lady approached Sahibzada Sahib and expressed her gratitude for an enlightening speech by him and showed him some Tabarrukat from the tomb of Hazrat Bayzeed Bustami (r.t.a.), which he took in his hands for barakat and thanked the lady for allowing him to see them. The program concluded with the grand refreshment service arranged by Minhaj-ul-Quran Australia. Sahibzada Hussain Qadri was farewelled by the Executive Committee members of Minhaj-ul-Quran Australia.