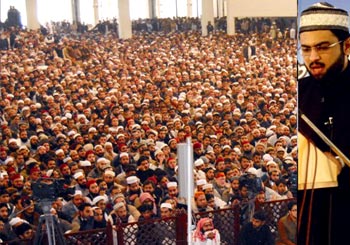 Three-day celebrations were held in the International Islamic University on the occasion of its silver jubilee in Islamabad. On February 21, 2010, ‘Rahmatul Lil Alameen Conference” was organized as the part of the celebrations in which Sahibzada Hassan Mohi-ud-Din Qadri, president of MQI’s Supreme Council, addressed on special invitation. The other distinguished speakers who spoke on the occasion included Maulana Muhammad Tariq Jamil, central head of the Tablighi Jamat, renowned religious scholar Kokab Norani, Allama Zahid-ur-Rashidi, head of the Pakistan Seera Council, Dr Raheeq Ahmad Abbasi, Secretary General of MQI, Dr Akram Chaudhry, vice chancellor of Sargodha University, and Allama Sajid Mir. The conference was attended by the religious scholars, professors, and students in a large number in addition to hundreds of people from across the country.

Prof Dr Sahibzada Sajid-ur-Rehman, Director of the Dawa Academy, thanked the guests in his concluding speech and the conference came to an end with the Dua.