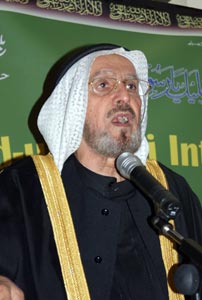 Speaking about the importance of the Milad festival Shaykh Yusuf al-Rifai said: “I want to say that the celebration of Prophet’s birth (Mawlid al-Nabbawwi al-Sharif) is a part of our love for the Prophet. So if there is love there is a celebration (al-Ihtifal), if there is no love there is no celebration (al-Ihtifal) and therefore those who deny celebrating (al-Ihtifal) their hearts are empty of love (al-Mahabba.)” The 78 year old renowned Muslim scholar spoke to an estimated 2900 Bangladeshi listeners gathered at the mosque. The profound scholar is a descendant of the Prophet Muhammad (s) and a former minister of Kuwait. He is the author of a number of treatises: Al-Tasawwuf wa al-Sufiyya fi Daw’ al-Qur`an wa al-Sunna – Sufis and Sufism in the Light of the Quran and Prophetic tradition and Khawatir fi al-Siyasa wa al-Mujtama – Thoughts on Politics and Society. 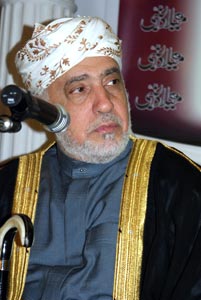 Shaykh al-Sayyid Yusuf said “… (People) claim here that the Arab world – the Arabs they are not celebrating the Prophet’s birth (al-Mawlid); they are saying this to you: From where have you brought the birth celebrations (al-Mawlid)? Arab people do not celebrate the birth (al-Mawlid). This is a big lie. This is the biggest lie. It is a day of celebration in Kuwait, Bahrain, United Arab Emirates, Dubai, Jordan, Syria, Iraq, Egypt, Morocco, Tunisia, Indonesia and Malaysia in all the Muslim community (al-Umma) and other areas. I have proof of this. Anyone can go to the embassies of these countries here and ask them whether you celebrate the Prophet’s birth (al-Mawlid) or not. They would then tell him this fact and he can even get videos of the celebrations. I myself brought the video of my celebration in my house and in my area for this year.”

Shaykh al-Sayyid Yusuf ibn al-Hashim al-Rifai also met with Shaykh-ul-Islam Muhammad Tahir ul Qadri in East London on Monday 8th March 2010. The scholars conversed up to two hours in Arabic and had supper together. Shaykh al-Sayyid Yusuf last visited the United Kingdom in 1998. He spoke at the International Truth Versus Falsehood Conference in Birmingham with other reputed scholars including: Shaykh Nazim al-Haqqani of Cyprus, Shaykh Hisham al-Kabbani of Lebanon and Dr Timothy Winters of Cambridge University. 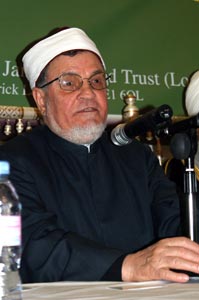 Senior Professor of Islamic Studies at the renowned Al-Azhar University al-Shaykh Dr Muhammad Abu al-Layla speaking about Mawlid celebrations said whilst most of the scholars today have explained the Mawlid commemoration is in accordance with the spirit of Islam, I would like to add we must celebrate it. Minhaj ul Quran London’s Media Secretary Asif Shakoor caught up with Shaykh Abu Layla at the conclusion of the conference. In an exclusive message Shaykh Abu Layla told him: “I would like to send my congratulations to the British nation – to England for giving such freedom to Muslims to celebrate the birthday of our Prophet Muhammad – who is the Prophet for all humankind not only for Arabs or Asians. He is sent as an act of mercy for humanity at large and by all means he offered this world and contributed greatly to the safety, order and peace of this world.” Shaykh Abu Layla said: “I appeal to the western community - people; especially in England it is dearer to me…. I have a great affection towards this country I am asking them – inviting them to re-read the story of our Prophet, his life they will find it enjoyable, attractable and applicable to our date and to the problems we are suffering and this is time to read about the Sufi – spiritualists in Islam. …There is no compulsion in religion, no coercion in religion. Religion cannot be imposed on anyone. It is unfair to say that the Muslims imposed their religion onto others or are trying to convert all people to Islam. It is not our aim; our task is just to let people know about Islam to be ourselves a good example in front of other people.”

Director of Minhaj ul Quran International centre, Shaykh Muhammad Sadiq Qurayshi said: “We are in this esteemed gathering to celebrate the birth of the Crown of Creation and Seal of Prophets Sayyidina wa Nabiyinna Muhammad. We are to show and express our joy for the Prophet and celebrate the great season and festival of his birth. We are here for a good intention in commemorating the honourable birth. To commemorate the birth is about holding a gathering, reciting portions of the Qur`an, narrating stories about the life of the Prophet, reciting poems and serving food is good this is a blessed and beneficial act.” Shaykh Sadiq Qurayshi told listeners we are venerating the Prophet’s status and expressing love and joy for his honourable birth. Director of Minhaj ul Quran London Shaykh Sadiq Qurayshi had dinner with Shaykh al-Kabir al-Sayyid Yusuf at the historical Brick Lane Mosque. 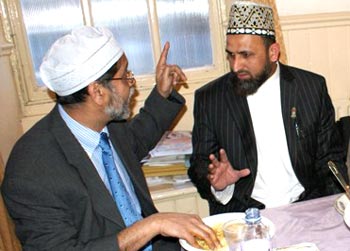 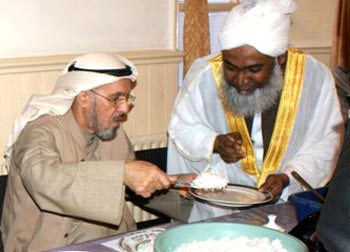