Stand up against terrorism & extremism 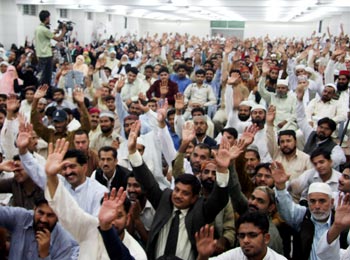 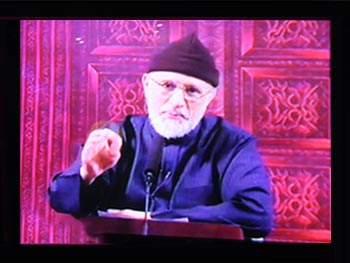 A special meeting of local chapters of Minhaj-ul-Quran International was held in the central secretariat on March 27, 2010. The chief highlight of meeting was the address of Shaykh-ul-Islam Dr Muhammad Tahir-ul-Qadri delivered telephonically Canada. The meeting was attended by representatives of local chapters of MQI from across Pakistan besides Amir-e-Tehreek Sahibzada Faiz-ur-Rehman Durrani, Nazim-e-Ala Dr Raheeq Ahmad Abbasi, Sheikh Zahid Fayyaz, G.M. Malik, Shaykh Abdul Aziz Dabbagh, Ahmad Nawaz Anjum and others. 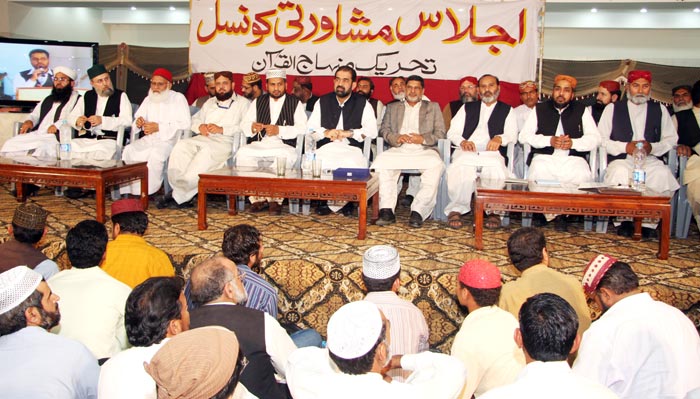 The proceedings of the programme got underway with the recitation from the Holy Quran followed by Naat after the evening prayers. Nazim-e-Ala Dr Raheeq Ahmad Abbasi threw light on the aims and objectives of the meeting. He briefed the participants about the historic Fatwa against terrorism issued by Shaykh-ul-Islam Dr Muhammad Tahir-ul-Qadri. He told that the Fatwa against terrorism has won international applause and the Islamic message of peace, harmony and interfaith dialogue being espoused by Minhaj-ul-Quran International under the inspiring leadership of Shaykh-ul-Islam has got immense boost around the globe. He said that the Western Think Tanks and media have given tremendous coverage to the Fatwa, first ever of its kind to be received by MQI in its history since its inception. The Fatwa has been regarded as a scholarly masterpiece and ‘a path-breaking’ initiative of Dr Muhammad Tahir-ul-Qadri. 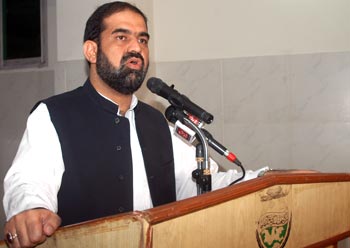 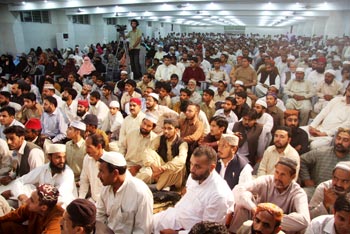 He apprised the participants that the Fatwa also brought the global focus back on Minhaj-ul-Quran International. MQI is a peaceful organization engaged in practical efforts to promote peace in the world through a variety of its endeavours. The Fatwa has served to boost its peaceful image in the world. 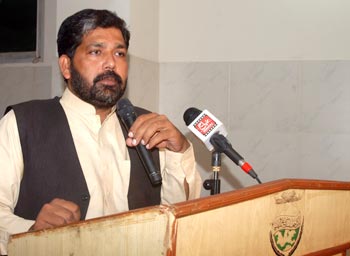 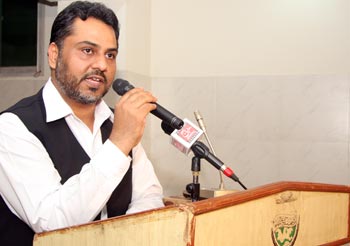 The participants kept on dilating upon the subject till 2:15 a.m. The office holders of MQI from different parts of the country paid rich tribute to Shaykh-ul-Islam Dr Muhammad Tahir-ul-Qadri for his scholarly and erudite defence of Islam against the charges of extremism and terrorism. 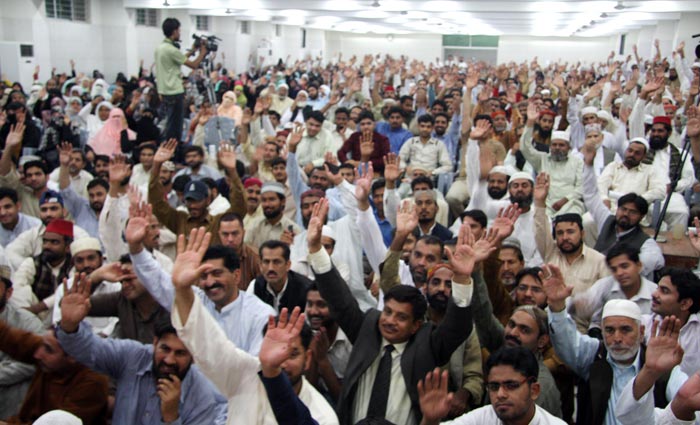 At 2:30 a.m., Shaykh-ul-Islam Dr Muhammad Tahir-ul-Qadri started his address live from Canada through video conferencing. He said that sectarianism has undermined the country and brought a bad name to Islam. He said that sectarian ideologies have given birth to a bigoted mindset, which is busy in eliminating those considered to be adherent of other schools of thought by branding them as ‘infidels’. The present and ongoing phenomenon of terrorism and extremism is also the outcome of such a narrow and brainwashed mindset. 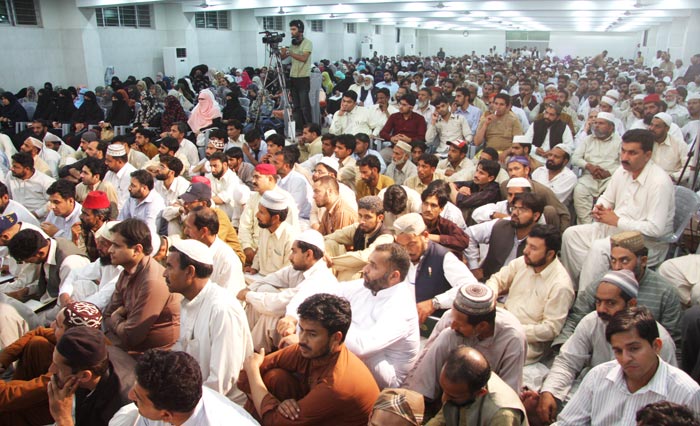 Shaykh-ul-Islam further said that the unending wave of terrorism and extremism has brought Islam and Pakistan into disrepute. People in the western world ascribe the terrorist actions to the Islamic motivations, while the fact remains that terrorism or use of violence to press a particular policy has nothing to do with Islam. He said that on the other hand, Islam ordains to completely wipe out terrorism and ignorance from the world. Terrorists are the worst enemies of Islam and humanity. In such precarious circumstances, understanding of Islam, practicing and promoting it have become difficult enterprise. He said that despite this being the state of affairs, it is our religious obligation to stand up to all manner of coercion and threats and promote the true message of Islam.

Addressing the workers and leaders of MQI, Dr Muhammad Tahir-ul-Qadri said that he knew that the atheist forces have woven the web of conspiracies against the Muslims in the world. What is even worse is that certain unwise and selfish elements have also become the tools of such forces for their narrow agendas. He said that being cowed down by pessimism and defeatism in such trying circumstances was not an option for those who wanted to keep the banner of Islam aloft, for these are signs of infidelity. He said that the severity of circumstances was all the more reason to move ahead on the right path and crush the hindering forces of pessimism and defeatism with our resolve and determination. 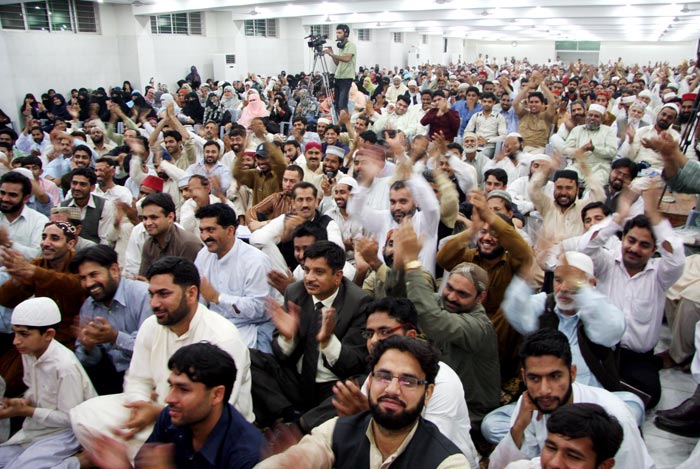 Shaykh-ul-Islam Dr Muhammad Tahir-ul-Qadri said that only perseverance and steadfastness guarantees success. We can find a cure for pessimism and impatience by taking a leaf from the book of the Holy Prophet (saw). The Prophet of Islam (saw) did not allow the unfavourable circumstances to impede his march to save the humanity from disaster. He said that we need to renew our pledge to stand up to all conspiracies being hatched against Islam with terrorism and extremism being on top of the agenda. He said that only those attain destination who have what it takes to fight off evil forces with their determination.

Sahibzada Faiz-ur-Rehman Durrani led the special prayer after the address of Shaykh-ul-Islam followed by dinner.