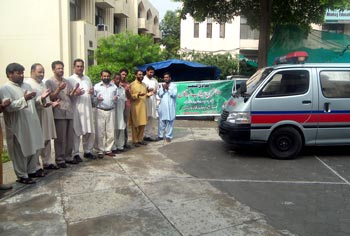 Minhaj Welfare Foundation has allocated a fleet of its five ambulances for the relief and rehabilitation efforts of the flood affectees. This service having first aid medical facility would be available for the people of Nowshehra District and its suburbs. Acting Director of the Foundation Syed Iftikhar Shah Bokhari said this while talking to media men on the occasion of send-off of the ambulances in Lahore today. A central delegation led by Mian Afzal Ahmad and Iftikhar Ahmad was sent to Noshehra, Kamra, and Attock to get first hand information, which would help formulate comprehensive relief strategy.

Iftikhar Shah Bokhari said that the worst ever flood of Pakistan’s history displaced hundreds of thousands of people and caused massive damage at a wider scale. The flood affectees cannot be left alone, and it is our religious and national duty to help them in this hour of trial. He said that Minhaj Welfare Foundation would do everything possible to mitigate the sufferings of its brethren. The process of setting up temporary tent settlements, he said, had begun in Kamra, Attock and Mianwali. He appealed to the affluent sections of society to come forward and join the efforts of Minhaj Welfare Foundation in this great cause. The main camp at the central secretariat of MQI was busy collecting donations, medicines, food and other necessities which would later on be dispatched to the flood affected areas.