At the new centre of Minhaj-ul-Quran International in Copenhagen, on the 19th of December, the Shahdat-e-Imam Hussain R.A Conference was organized by Women League in which a large number of women from Copenhagen and surrounding areas participated. 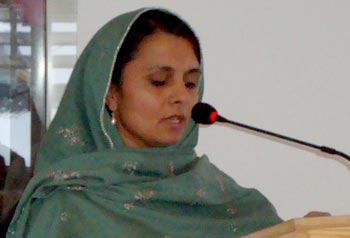 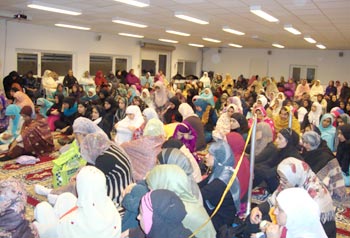 The program commenced with the verses from the Holy Quran recited by Hafiz Ateeq from Minhaj-ul-Quran International Denmark. After recitation from the Holy Quran, Hajirah Shah presented Hamd of Allah Almighty. Later on, gifts of glories and exaltations were presented in the honour of our Holy Prophet (S.A.W) by Zahida Aslam and sisters from Minhaj Ul Quran Youth League. After recital of Naat, praises of virtues (Munqabat) of Imame Aali Muqam, Hazrat Imam Hussain R.A were presented by Huda Malik. Samia Sajid, Kokab Tufail, Samila Qureshi, Shabana Ahmad, Nabila Nafees and their colleagues.While addressing the women’s congregation, President of Minhaj-ul-Quran International Denmark, Allama Abd-us-Sattar Siraj said that humanity will always remember exultantly the example of sacrifices set by Hazrat Imam Hussain R.A, his family and his trustworthy friends while travelling on the path of hardships. He further said that to express love for the family of Holy Prophet (S.A.W) and to weep in the grief of Imam Hussain R.A is the elementary part of Islam. 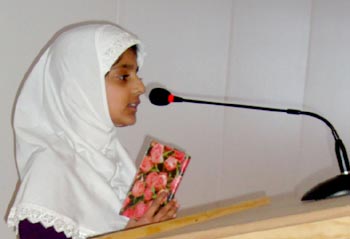 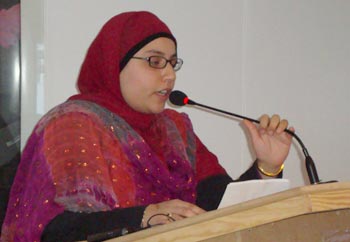 He said that Yazeed was the representative of oppression and brutality and Imaam Hussain R.A was the figure of truth and justice. He said that Minhaj-ul-Quran and Shaykh-ul-Islam Dr. Mohammad Tahir-ul- Qadri are distributing the love of the family of Holy Prophet (S.A.W) and the love of Sahaba (companions of Holy Prophet S.A.W ) from the very first day. His objective is to unite, not to dissipate, and with the will of Allah, the day will come soon when the whole Muslim Ummah will re-unite Insha’Allah.Farhat Shaheen Ghulam also spoke on the Karbala Event in Danish language and she differentiated between the philosophy of Imam Hussain R.A and that of Yazeed. Selected parts from various lectures delivered by Shaykh-ul-Islam Dr. Mohammad Tahir-ul- Qadri on the subject of Karbala were also shown on the overhead projector, that strongly influenced the women, and they also showed an immense interest at the Minhaj bookstall in the conference hall. They bought books and cassettes of Shaykh-ul-Islam.A significant member of Minhaj Sisters League Mussarat Zahoor Ahmad, conducted the proceedings of the program as stage secretary in an impressive manner.