On Sunday, the 9th of January 2011, the Minhaj-ul-Quran Women League organized a conference in Glasgow’s Minhaj-ul-Quran Centre to commemorate the Martyrs of Karbala. The program commenced with the recitation and translation of verses from the Holy Quran by Sister Habeeba. After the recitation of the Holy Quran, Sister Maheen praised the gifts of glories and exaltations in the honour of our beloved Holy Prophet (SAW). 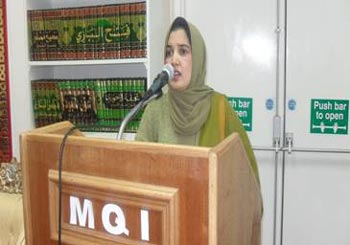 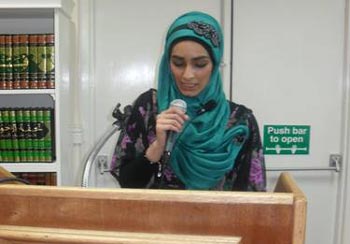 Sister Safina Tahir opened the proceedings of the program by welcoming the participants to the centre of Minhaj-ul-Quran International and thanked them for attending this blessed gathering of ‘Yaad-e-Hussain’ (RA). She invited Sister Ruhi Ahmad, Vice President, to conduct the proceedings of the program. Throughout the program many sisters recited Naat and sent greetings and salutation on the the Holy Prophet (SAW) and his family (RA). Sister Humma delivered a speech in English on the role of Syedda Fatima-tul-Zahra (RA).

She stated that Syeddina Imam Hussain (RA) was a clear representative of Islam and beautifully explained that anything that belonged to Syeddina Imam Hussain (RA) belonged to the Holy Prophet (SAW) and Syedda Fatima-tul-Zahra (RA). This included characteristics such as the courage to fight and the courage to deal with an evil regime. Each and every characteristic of Syeddina Imam Hussain (RA) was completely coloured and scented with Holy Prophet’s (SAW) and Syedda Fatima-tul-Zahra’s (RA) fragrance. Finally Sister Ambreen delivered her speech in Urdu clarifying misconceptions nourished by a few elements with regard to the retched Yazeed being a Muslim. She proved in the light of the following Quranic verse, that Yazeed is cursed by Allah Almighty as he has hurt the personality of the Holy Prophet (SAW) by torturing and martyring his beloved family: 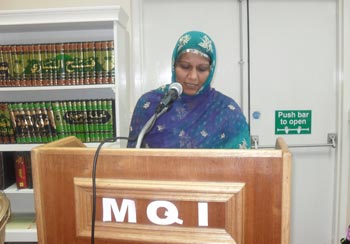 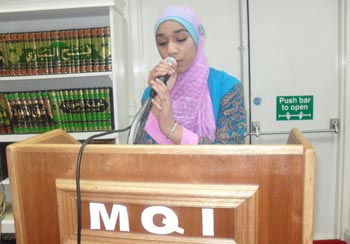 “Surely those who offend Allah and His Prophet, Allah curses them in the world and in the Hereafter and He has prepared for them a disgraceful torment.” (al-Ahzāb, 33:57)

She established crystal clearly in the light of the Quranic verses and hadith that the accursed Yazeed was indeed a kafir (disbeliever) and not just a mere sinner who sought to debunk the teachings of Islam. But the great Imam offered a grand sacrifice to save Islam from any possibility of being disfigured. Sister Ambreen concluded her speech by introducing masterpiece literature on the subject produced by Shaykh-ul-Islam Dr Muhammad Tahir-ul-Qadri which deals with the events of Karbala and also clarifies the misconceptions regarding Yazeed. She urged the participants to buy these lectures and books and gift them to their families and friends. The gathering concluded with greetings and salutations upon the Holy Prophet (SAW) and the family of the Holy Prophet (SAW) by Sister Yasmeen, which followed on with an emotional Dua by Sister Jameela.