Minhaj-ul-Quran International Athens organized "Milad-e-Mustafa conference (saw)". The conference was held in Jamia Masjid Rendi Nikia in Athens at night. The event was presided over by Mr. Javeed Awan. Besides this, Dr Tanveer, Skinder Riaz Chohan and Mr. Shafique Awan were also present on the occasion. A large number of people belonging to different walks of life attended the Conference. 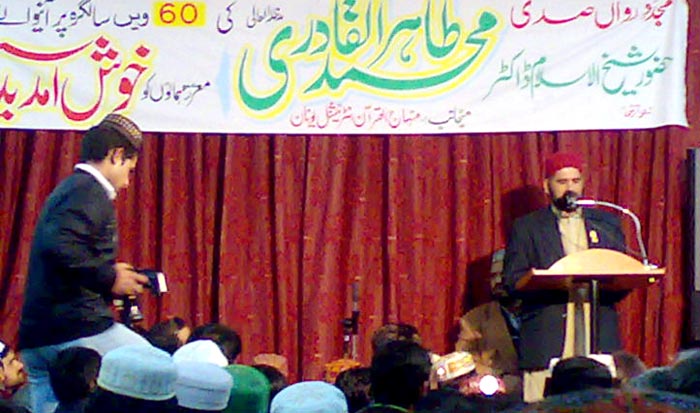 Speaking on the occasion, Allama Shabaz said that the birthday of the Holy Prophet (SAW) is the most important occasion for the Muslims and it should be celebrated befittingly. He said that the cancer of terrorism and extremism has spread because the Muslims have alienated themselves from the real teachings of the Holy Prophet (SAW). Allama Shahbaz paid glowing tribute to Shaykh-ul-Islam Dr Muhammad Tahir-ul-Qadri for his multiple services for the promotion of peac, interfaith harmony and love in the world. He said that MQI under the inspiring leadership of Shaykh-ul-Islam has put up a strong shield against the forces of terrorism and extremism, which are bent on disfiguring the teachings of Islam. He specifically mentioned the 600-page Fatwa on Terrorism authored by Shaykh-ul-Islam, which has allayed the misconceptions about the Islamic concept of Jihad in the western world besides exposing those who justified acts of terrorism and barbarism by invoking religion. He said that the book advocates the concept of integration for the Muslims living in West and other non-Muslim world.

Prior to his speech, the formal proceedings of the Conference began with the recitation of the Holy Quran followed by Naat. The participants also cut a 60-pound cake to mark the birthday of Shaykh-ul-Islam Dr Muhammad Tahir-ul-Qadri who turned 60 on February 19, 2011. The program ended with Dua after recitation of greetings and salutation on the Holy Prophet (SAW).