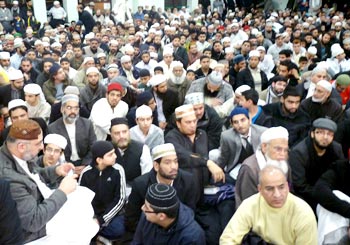 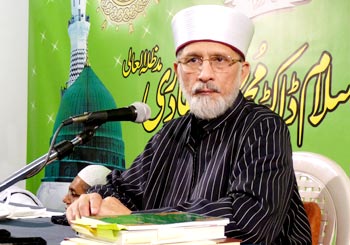 On February 20 2011, a historic Mawlid-un-Nabi (S.A.W.) conference was held in Madni Jamia Masjid Bradford, UK, which attracted an estimated 10,000 participants. The Milaad-e-Mustafa (S.A.W.) Conference jointly organized by Minhaj-ul-Quran International (UK) and Madni Jamia Masjid was a great success as a large nuber number of participants kept turning up at the mosque the whole night in order to listen to the special guest who was none other than Shaykh-ul-Islam Dr Muhammad Tahir-ul-Qadri.

The venue for this historic conference was one of the largest mosques in the UK, yet as in previous events where Shaykh-ul-Islam has spoken, no mosque seems to be large enough to accommodate the thousands who turn up to listen to him. 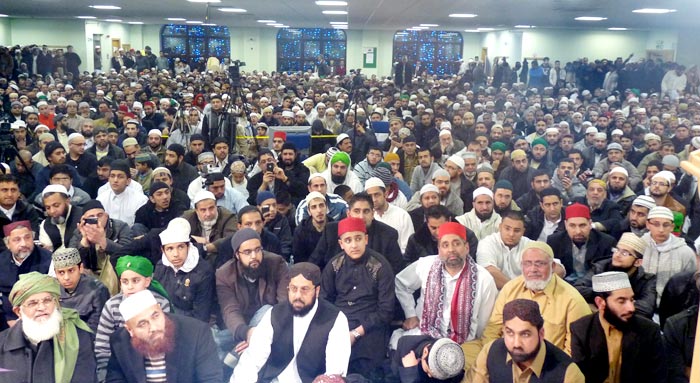 Shaykh-ul-Islam Dr Muhammad Tahir-ul-Qadri arrived at the venue after Isha prayers. The hundreds of scholars and Imams were present. The main session of the conference began with recitation of the Holy Quran by Qari Zaheer Iqbal from Halifax, followed by a nasheed praising the Holy Prophet Muhammad (S.A.W.). 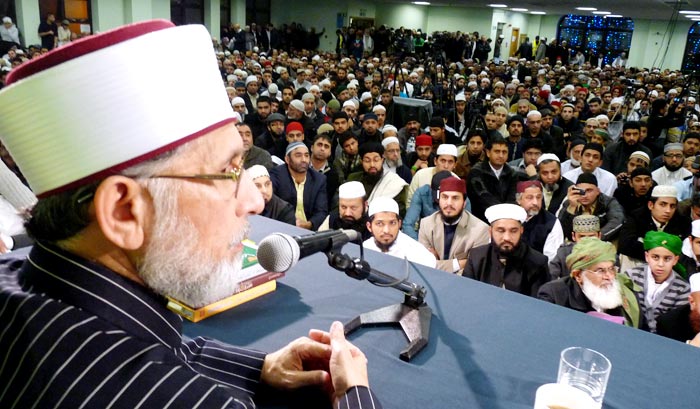 Addressing the conference, the chairman of Muslim Hands, Sahibzada Sayyed Lakht-e-Hasnain Qadri made it clear to the audience that he believed that if the Muslims want to progress and take themselves out of the current downfall, then they must accept Shaykh-ul-Islam as their leader. He said that Shaykh-ul-Islam Dr Muhammad Tahir-ul-Qadri has been working for the past forty years to spread peace and unity among the Muslim Ummah. He added that Shaykh-ul-Islam was reviving the true love for the Prophet (S.A.W.) in the hearts of younger generations through his spiritualizing speeches and written work on the subject.

Allama Umar Hayaat Qadri, one of the renowned scholars featuring on Takbeer TV, said that Shaykh-ul-Islam Dr Muhammad Tahir-ul-Qadri has successfully countered the challenges facing the Ummah. He asked Shaykh-ul-Islam to respond to the challenges facing the younger generations. Allama Sajid al-Qadri in his brief talk quoted a hadith praising the high status of the Holy Prophet (SAW). 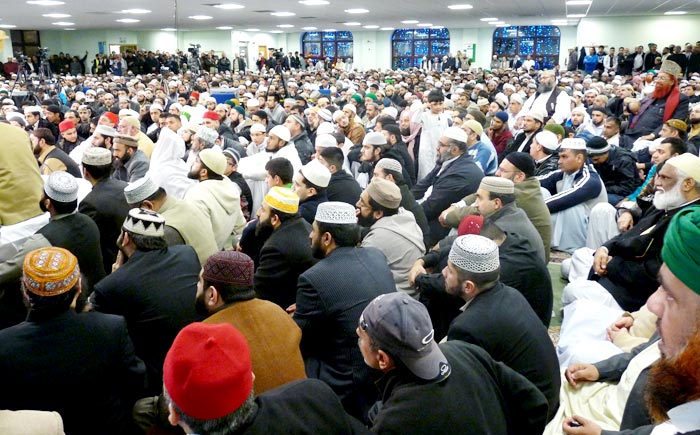 Chairman Midland Mosques and renowned political and religious figure Maulana Bostan Qadri briefly made it clear to the audience on why we have all flocked to this mosque to listen to Shaykh-ul-Islam. He dilated upon the unique qualities and achievements by Shaykh-ul-Islam.

Allama Muhammad Sadiq Qureshi al-Azhari from London delivered a reverberating speech on the unique status of the Holy Prophet Muhammad (S.A.W.) and how great the occasion of his birth is.

Allama Muhammad Afzal Saeedi, President - National Executive Council MQI UK, announced the publication of the English version of the historic Fatwa on Terrorism and Suicide Bombings by Shaykh-ul-Islam and its availability to all those who were anxiously awaiting its arrival. He also announced the upcoming national conference, Peace for Humanity: Muhammad S.A.W. the Merciful, which will have Shaykh-ul-Islam as its keynote speaker taking place at the Wembley Arena on the 24th of September 2011. Tickets of the Conference and full details are available at http://peaceforhumanity.net

At this point, the audience could not wait any longer and were determined to listen to Shaykh-ul-Islam.

Shaykh-ul-Islam began his lecture shortly before 10:00 p.m. The duration of the lecture was three hours, which concluded just before 1:00am.

The main topic of the lecture was based on the beginning verses of Sura al-Buruj. (The full lecture can be seen here www.minhaj.org)

The event concluded by Salah and Salam upon the Holy Prophet (S.A.W.), followed by a supplication by Shaykh-ul-Islam.