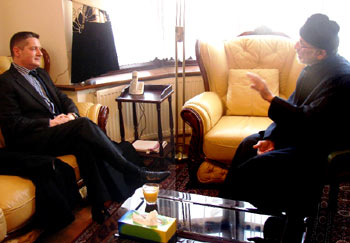 Dr Joel Hayward has been appointed as ‘Strategic Policy Adviser to Dr Muhammad Tahir-ul-Qadri’ after a meeting in London on March 8, 2011. Dr Hayward has been given this responsibility with immediate effect. In a four-hour meeting with Shaykh-ul-Islam Dr Muhammad Tahir-ul-Qadri various issues of mutual interest were discussed including the role of Muslims in Britain, human rights and integration in British society, and the struggle against extremism. A scholar of war and strategy (including the Qur’anic concepts of war), Dr Hayward fully shares Shaykh-ul-Islam Dr Muhammad Tahir-ul-Qadri's scholarly judgment that, regardless of any motives, terrorism can never be supported (and is in fact condemned) by the Qur’an and the Sunnah. The meeting was also attended by Dawood Mash’hadi, Minhaj-ul-Quran Foreign Affairs Co-ordinator; Shahid Mursaleen, Spokesman Minhaj-ul-Quran UK and Ishtiaq Ahmed, General Secretary of Minhaj Peace and Integration Council.

Dr Joel Hayward's strategic advice to Dr Muhammad Tahir-ul-Qadri is not a formal responsibility within his professional career. He offers his expertise unofficially out of a desire to improve human integration and cultural harmony.

Dr Hayward holds various academic posts, including Dean of the Royal Air Force College, Co-Director of the Royal Air Force Centre for Air Power Studies, Head of King's College London's Air Power Studies Division and Professor of Strategy (Adjunct) at the Indonesian Defense University. He is the author and editor of eight books as well as dozens of peer-reviewed book chapters and journal articles, some of which have appeared in German, Russian, Portuguese, Spanish and Serbian translations. He lectures widely throughout Europe, the Middle East, Asia and beyond on various political, defence and security topics. He also frequently teaches and writes on Islam, war and justice and speaks at anti-radicalisation workshops. Unusually for a social scientist, he is also active in the literary arts and has published both fiction and poetry. His second collection of poetry is due to be out shortly. He also writes regular political and literary columns in several magazines. He has recently written an introduction to Dr Tahir-ul-Qadri’s book “Fatwa on Terrorism and Suicide Bombings”

Commenting after the appointment Dr Hayward said “It is a tremendous honour to support Shaykh-ul-Islam Dr Muhammad Tahir-ul-Qadri and the Minhaj-ul-Quran organisation through the provision of strategic policy advice. As someone who has always been committed to the wellbeing of all humans through religious moderation, accessible and enriching education, and dialogue based on mutual respect between the world's great faith communities," He added "I have the highest regard for the Minhaj-ul-Quran organisation. Its aspirations are worthy and potentially world-changing. As a scholar who loves rock-solid research and good judgment, I am also extremely impressed by the Shaykh's impeccable scholarship. Insha'Allah I can contribute something useful to further the causes of peace, respect and toleration.”


Click to visit Print Media Coverage for the same.