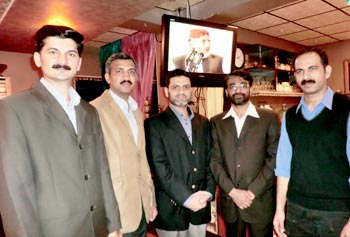 Speaking to people in Taiwan, Ali Imran, president of Minhaj Asian Council, gave an enlightening talk on the subject of Mawlid-un-Nabi. Emphasizing the need of love for Allah Almighty and the Holy Prophet (SAW), he said that this was the pivot to successfully take on challenges facing the world of Islam today. He also shed light on the services of MQI in the field of peace, and interfaith harmony. He told the audience that the network of MQI has been established in ovr 90 countries under the leadership of Shaykh-ul-Islam Dr Muhammad Tahir-ul-Qadri. MQI, he said, is engaged in a relentless struggle against the forces of terrorism and extremism and is spreading the true Islamic teachings both in the Muslim and non-Muslim societies. He said that the historic Fatwa authored by Shaykh-ul-Islam Dr Muhammad Tahir-ul-Qadri has gone a long way in exposing the real face of those elements who want to invoke the fair name of religion to justify their brutal conduct. It has also allayed confusion and misconceptions about Islam in the western world.After the briefing by Ali Imran, a large number of people declared to join MQI followed by establishing MQI Convening body Taiwan chapter. The office holders are Muhammad Ilyas Qadri (Head), Nasir Ahmad Ch. (Member), Rana Muhammad Amin (Member), Haji Muhammad Ghazanfer (Member), Obaid Hussain (Member), Mian Muhammad Anwer (Member), and Muhammad Zaheer (Member). The newly Convening body was felicitated and the program ended on Dua.