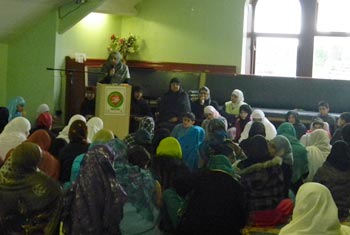 On the 7th of September 2010, (27th Ramadan), Minhaj ul Quran International (Nelson and Burnley) lost a flower from its garden of roses in the person of auntie Mumtaz. To some she was a daughter, for others she was a sister, a mother, a grandmother and to us she was our beloved auntie. Auntie Mumtaz was a dedicated worker of Minhaj-ul-Quran International Nelson and Burnley. Minhaj ul Quran Nelson organized a memorial meeting to pay tribute to the services of auntie Mumtaz.

The proceedings of the program began with Qur’an khawani and followed by collective gosha-e-durood by sister from Nelson and Burnley. Alhamdulillah 10 quran sharif’s, 1,004 surah yasin and 40,000 durood sharif were read for the ‘asaal-e-sawwab’ of auntie Mumtaz. Baji Khurshid (sister of Auntie Mumtaz) who spent her days with her in hospital said that auntie Mumtaz spent the last 30 minutes of her life reciting the kalimah and then she left this world. 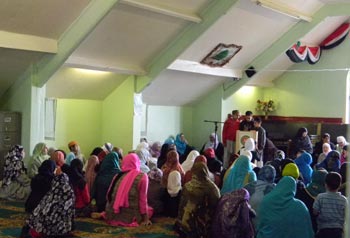 Syeda Fozia said that auntie Mumtaz was a great person who worked day and night for the mission. She further said that when auntie sat with the elders she became one of the elders and when she joined the company of the youngsters, it looked as if she was one of them. Other guests also offered their condolences and prayed to Almighty Allah to grant Auntie Mumtaz a high station in Paradise and give her family patience to bear her loss. Sister Safia gave a brief talk on the qualities of auntie Mumtaz. She spoke about how auntie Mumtaz worked for the mission of promoting peace, harmony and interfaith dialogue. She further said that auntie Mumtaz was a woman of substance and character. The gathering ended with ‘salaat-us-salaam’ and dua. May Allah SWT grant our beloved Auntie high station in Paradise and patience to her family!