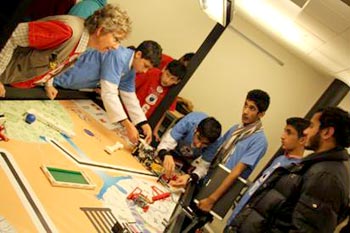 A team of Minhaj Youth, “Geek Power Woopies”, won the FLL Champions trophy and became the FLL Champions of Lillestrøm regional competition. This secured the team a place in the Scandinavian final where they stood second among 12,000 participants. The team is now getting ready for the European final in the Netherlands in June, Insha’Allah.

Minhaj-ul-Quran’s team consisted of six members who participated in the world's largest knowledge contest, First Lego League (FLL), which was held in 50 countries. FLL is an international robotics program and tournament for children between 8 and 16 years of age. FLL helps increase interest in science and robotics technology by challenging participants through solving real-time problems through research, strategy, design, prototyping, testing and reporting. FLL fosters personal and professional development through cooperation and practical learning towards a common goal. By using special Lego sets, teams build robots to solve several problems in few minutes and do research on a given topic from the theme of the year, which was biomedical technology this year. In the regional competition, the team won three awards; award for the best scientific research, award for the best robot technology and First Lego League Champion for the overall best performance in all parts of the tournament, and with a second best score in overall robot runs in the tournament. 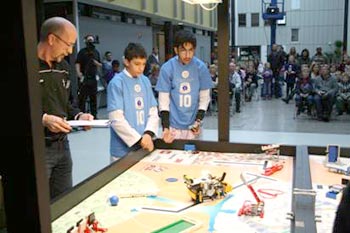 Because of the team’s strong performance they advanced to the Scandinavian final in Grimstad where 40 best teams from Norway ,Denmark, Faroe Islands and Sweden were represented. In the Scandinavian final, the team finished second in the research category and won the second prize research award, one of the most prestigious awards. The prize is only awarded to the first and second place. This award goes to the team that understands the various issues related to this year's mission, which was biotechnology. In addition, the team has to show through their studies and presentations that they fully understand the chosen topic. Innovative solution, a good presentation, creativity and commitment is emphasized in this context. The team's task was to find a solution on how biomedical technology can heal, repair or improve life for the person who has caught a given disease/injury. Geek Power selected diabetes as their topic and disease for further investigation. 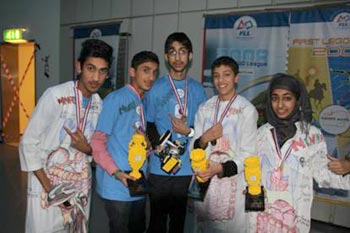 In this presentation, the team showed that they had a very good understanding of the topic, a great commitment and creativity through a role-play and a movie they made. After the presentation the judges felt that they were confident that all those who presented would become scientists one day .The award made the team eligible for the European final in Holland that brings together 72 teams from 44 countries in June next year, Insha’Allah. A team enters into FLL tournament every year in the robotic activity since 2004. Same year it was started as part of Minhaj Education Center’s curriculum to spark motivation for sciences, creativity and leadership. From the first year the team has won many awards, but 2010 was the first year to win and become the Champions of a regional final and to participate in the Scandinavian and European Final. 2010 Team members were: Waleed Ahmed, Raeha Malik, Asma Shouket, Osama Zariouh, Waqas Mohammad and Raza Awais. 2010 Team supervisors: Sana Shouket, Sofyan Raja and Farooq Ansari.