On March 16, a group of nine boys along with five adults set off from Head Quarters in Romford Road for the House of Commons. The boys were headed to meet local MP, Stephen Timms, so that they could present him with a colorful and evocative picture. Fourteen boys aged between six and fourteen worked together on the painting in the course of the Minhaj Art Class. 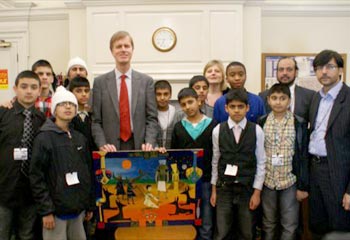 The theme of the picture had been chosen by Mr. Stephen Timms, MP for New ham. He picked the story of Prophet Yusuf (AS) and ‘Aziz-e-Miser’ (Firaun) as his subject because it is mentioned both in the Holy Quran and the Old Testament. Yusuf - or Joseph as he is called in the Bible held a special significance for him, he said, because faith had sustained Joseph through his trials and then his later success. Many people had warned Stephen Timms that faith and politics do not mix, but he believes the contrary to be true.The group was welcomed and entertained in Mr. Timms’ office overlooking the Thamesin what used to be the old Scotland Yard building, haunt of Sherlock Holmes .The MP seemed genuinely pleased by the painting. He asked each boy about his contribution and showed exactly where he would hang it, replacing a dull electoral map.Mr Timms had to make a short dash in the middle of the meeting to vote on the new NHS bill in the House of Commons chamber. It brought to life the parliamentary process which Siar Painda, one of the boys, memorably described as a kind of ping pong between the Commons and the Lords. Ms Allegra Owen, who is the Art Teacher at Minhaj ul Quran London for past five years, was also present at the House of Common. She is an Oxford graduate and ex-wife of Boris Jonson Mayor of London. Amongst the other members of Minhaj-ul-Quran London were present included Mr. Sajid Hussain, Mr. Usman Ghani, Mr. Ali Khan, Mr. Baber Javed Butt.