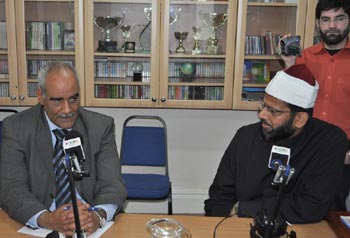 Sunday 27 June 2011: Dr Abdul Daaim al Naseer, Secretary of the World Associates of Al-Azhar Graduates (WAAG) told listeners of Awaz 103.1FM (a local community radio based in Nelson), that under the leadership of Shaykh-ul-Islam Dr Muhammad Tahir-ul-Qadri, Minhaj-ul-Quran International has excelled in spreading knowledge and set new benchmarks for welfare of suffering humanity throughout the world. In a Live and Exclusive Radio broadcast Professor al Naseer spoke of the importance of highlighting the true and ‘moderate path’ of the Islamic faith. That is why Al-Azhar University has decided to establish branch offices around the world to gain a better insight into the views of local communities and to empower them with the teachings of love, peace and harmony. Arabic to English translation during the interview was done by Shaykh Muhammad Ramadhan Al-Qadri Al-Azhari. In 2010 Minhaj-ul-Quran International was awarded by Al-Azhar as its main branch office in Pakistan under WAAG and Sahibzada Hassan Mohi-ud-Din Qadri, President of MQI’s Supreme Council, is the chairman of Pakistan chapter of WAAG.The visit was part of a new initiative, WAAG (World Association of Al-Azhar Graduates) initiated by the oldest Islamic University, which is spreading the moderate teachings of the Islamic faith throughout the World.