Shaykh-ul-Islam Dr. Muhammad Tahir-ul-Qadri arrived in Sydney, Australia on 9th July 2011 at Sydney International Airport where he was received and welcomed by Sahibzada Hussain Mohi-ud-din Qadri, President Federal Council of Minhaj-ul-Quran International, executive members of Minhaj-ul-Quran Australia and other members and dignitaries of various religious and community groups. 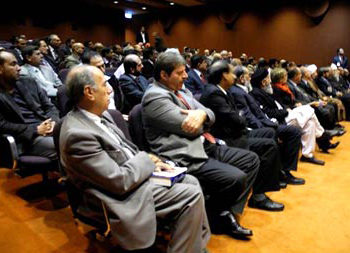 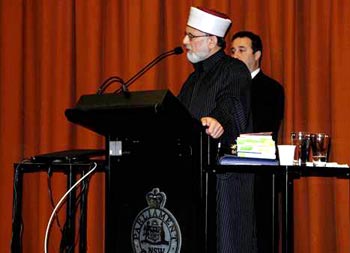 Shaykh-ul-Islam Dr Muhammad Tahir-ul-Qadri visited New South Wales (NSW) Parliament House on Monday 11th July 2011 and delivered a special lecture and had a discussion with several members of the parliament on the issues of terrorism and integration. He was invited by the member of the NSW Legislative Council, the Hon. Shaoquett Moselmane MLC. The audience at the lecture comprised members of the NSW Legislative Council, ministers, politicians, policy makers, senior scholars and religious leaders, etc. Shaykh-ul-Islam, who is on an important visit of peace mission to Australia, was accompanied by Sahibzada Hussain Mohi-ud-Din Qadri. 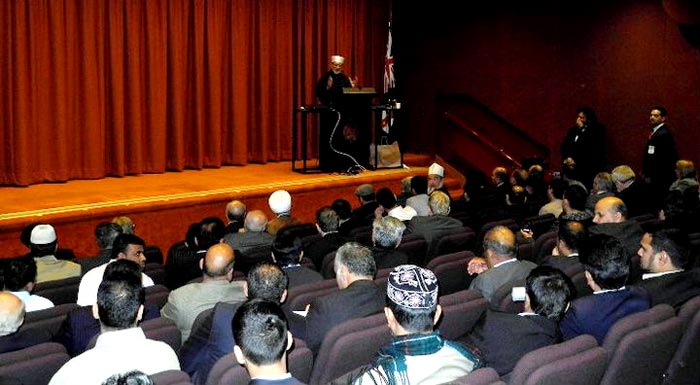 Shaykh-ul-Islam answering the questions asked by the audience

Speaking on the subject of Islamic concept of Jihad, drastically misunderstood in the Western societies, Shaykh-ul-Islam Dr Muhammad Tahir-ul-Qadri unflinchingly declared that the Islamic concept of Jihad offers guarantee for the establishment of global peace and a welfare-oriented commonwealth of nations. It is unfortunate, he denounced, that the so-called Jihadi groups misinterpret this concept and use it for their nefarious agenda. He said that these groups misinterpret the verses that particularly deal with the concept of Jihad in the Holy Quran in order to suit their evil objectives. Consequently, the concept of Jihad gets confined to killing--a total distortion of what the Quran says what Jihad really is. 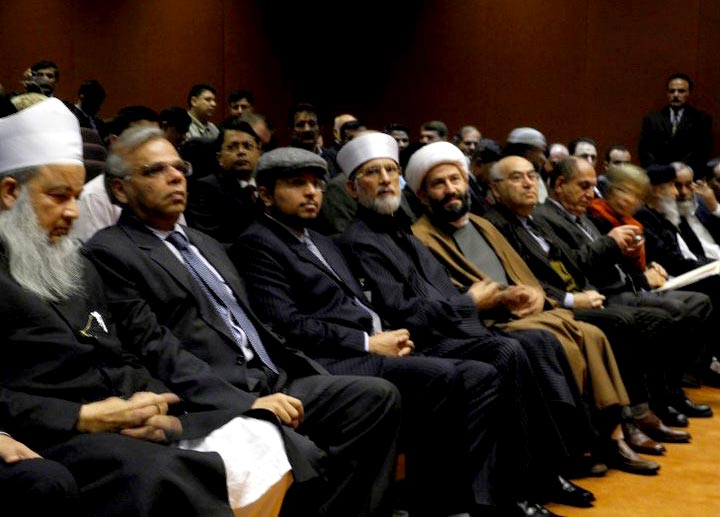 Referring to the holy life of the Prophet of Islam (S.A.W), Shaykh-ul-Islam Dr Muhammad Tahir-ul-Qadri said that the founder of Islam fought against different forces for thirteen years, only defending himself and his people against the wars imposed upon them. He did not attack the enemy forces on his own even in a single battle. He always fought back the aggression initiated against them by the enemy.

In the same context, Shaykh-ul-Islam Dr Muhammad Tahir-ul-Qadri emphasized that no individual or a group is allowed to declare Jihad on his own. He said that the Muslims fought more than 60 battles during the period of Holy Prophet (S.A.W.) and there was not even a single battle out of 60 wherein they pre-empted the enemy attack. They were always forced to react in defence when wars were imposed upon them, leaving them with no option but to strike back. He said that the words such as “Jihad for the sake of Allah” are also misinterpreted.

At the end of the speech by Shaykh-ul-Islam, the audience asked various questions which he answered befittingly and in detail. Answering to a question about the role of Muslims living in a Western society, he said that Islam does not ask Muslims to impose their culture, values or religious practices on others. He emphasised that, according to Islamic and Quranic teachings, Muslims living in Western societies like Australia must obey the laws of the land, and be loyal to the state in return to the freedom provided by the state to practice their own Islamic and cultural practices.

Hon. Shaoquett Moselmane, MLC, thanked Shaykh-ul-Islam for accepting his invitation and delivering the lecture at the NSW Parliament and presented to him a certificate of appreciation. Shaykh-ul-Islam also presented a copy of his recently launched popular 600-page decree ‘Fatwa on Terrorism & Suicide Bombings’ to several members of the parliament and the Legislative Council.

Shaykh-ul-Islam is on a month-long visit of Australia where he will deliver several public lectures including one in Sydney on 16th July, Melbourne on 23rd July, and Brisbane on 30th July, on the topics of peace, integration, harmony, interfaith relations, and counter-terrorism. More information about his visit and schedule of his lectures can be found at www.minhaj.org.au.