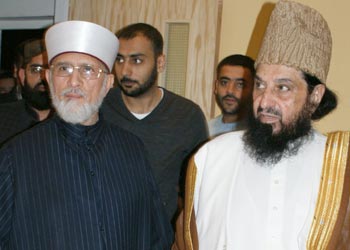 Muslim scholar Mufakkir al-Islam Shaykh Dr `Abd al-Qadir said: “At this moment my meeting with Shaykh al-Islam is solely for the pleasure of Allah (God). Shaykh al-Islam has dedicated his days and nights in defence of the esteem honour and respect of the companions of Prophet Muhammad (pbuh). His (Dr Qadri’s) services would leave unforgettable memories in history. His thoughts and ideas are in union with me. We are unanimously stating that we will work collectively for the propagation of religion.” Both scholars agreed that there were major ideological onslaughts against traditional Islamic teachings from extremist elements. They agreed to tackle internal and external problems of extremism and terrorism. Shaykh al-Islam Tahir al-Qadri said that our community faced great threat and turmoil from al-Khawarijiyya - extremists and terrorists. Shaykh Dr `Abd al-Qadir added: “The crown of Medina, the king of Medina (Prophet Muhammad) was the greatest model and torchbearer of peace for humanity” 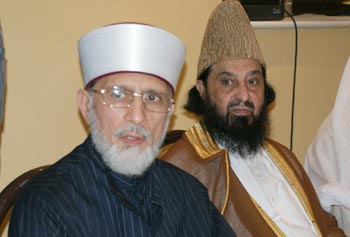 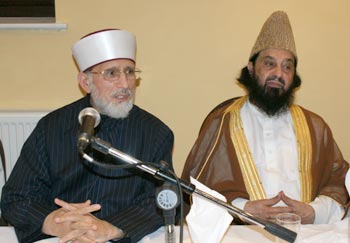