Islam 'Denotes Peace in Every Aspect of Life'

Shaykh-ul-Islam Dr. Muhammad Tahir-ul-Qadri, one of Islam's most influential scholars, stated during a lecture Thursday night at Elmhurst College that those who perpetrated the Sept. 11, 2001, terrorist attacks violated the basic teachings of Islam and the Koran.

Tahir-ul-Qadri said acts of terrorism, such as those conducted on 9/11, are “outside the boundaries of Islam.”

Tahir-ul-Qadri is the founding leader of Minhaj-ul-Qur’an, which is an international welfare, human rights and educational institution. He has written more than 1,000 published or yet-to-be published books on Islam, and made headlines two years ago when he issued a 600-page fatwa, or legal edict, stating that terrorist acts are criminal and violate Islam, international law and human rights. 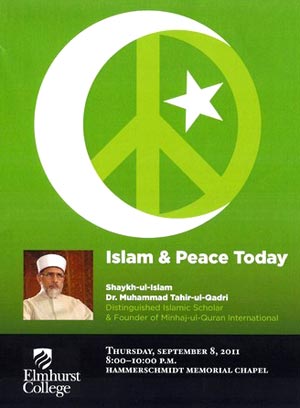 Throughout most of Thursday’s lecture, Tahir-ul-Qadri emphasized that the three levels of Islamic faith—Islam, Iman and Ihsan—mean peace and “denote peace in every aspect of life.”

Tahir-ul-Qadri said the first level, Islam, means “the door to enter peace—free of aggression and free of any kind of cruelty and injustices” toward other human beings, regardless of whether someone is Muslim or non-Muslim.

“He alone will enter paradise who has a peaceful heart,” Tahir-ul-Qadri said.

The root word of Iman, the second level of Islam, means peace and security for all, regardless of one’s religious beliefs, according to Tahir-ul-Qadri.

The Koran, he said, also instructs Muslims to live in community and peaceful coexistence with non-Muslims, and to treat them with courtesy, kindness and generosity. He added that the Koran forbids Muslims from threatening or harming individuals who practice other religions, such as Christianity and Judaism.

In fact, Tahir-ul-Qadri noted that the Constitution of Medina, drafted by the Islamic prophet Muhammad, underscores peace and security for everyone in a community, as well as religious freedom for all community members.

Toward the end of his lecture, Tahir-ul-Qadri addressed Jihad, which many in the West believe to mean “holy war,” and a call for violence and acts of terrorism. He explained that the term has been incorrectly translated and, thus, widely misunderstood.

He said there are 35 verses in the Koran that contain the word Jihad, but the words “Jihad” and “killing” are not mentioned together in a single verse. In Islam, Jihad has no link to violence or terrorism, and means to struggle within oneself for good and eliminate evil. The actual term in Arabic for “holy war” is al-harb muhadassa, not Jihad, he said.

Tahir-ul-Qadri went on to say Jihad is a broad concept that does include what the Koran interprets to be grounds for a just war—one that is waged strictly for self-defense if a nation is attacked. In such a war, he said, the Koran makes it clear that innocent non-combatants are not to be hurt or killed.

“Only if war has been imposed on you are you allowed to fight for your defense,” he said.

“It was challenging, but inspiring,” he said, “because for those of us who have lived through the last 10 years (since the 9/11 attacks), it’s very climactic to hear someone talk about, ‘What does the Koran say? What does Muhammad say?’ and then try to put the pieces together as we try to move forward together in peace.”

Joshua Longmire, an Elmhurst College sophomore majoring in religious studies and exercise science, said he was pleased with what Tahir-ul-Qadri had to say, particularly when he spoke about how Jihad is misinterpreted.

"It was an eye-opening experience, especially his scholarly points of view,” said Longmire, a Woodridge resident. “Nowhere is it (Jihad) mentioned as war; it’s always mentioned as a (personal) struggle.

“All the things he said lined up with the base faiths of Christianity and all other religious sects. I think it was a very interconnecting speech, especially the way he spoke to all people of all different faiths.”